And there's a Gordon Ramsay protégé in the kitchen. When Charing Cross Hotel recruited Matt Kemp four years ago, the dining room started to pull a crowd from the Sydney eastern suburbs of Waverley, Bronte, Tamarama and Queens Park.

He's since left, but publican Warren Livingstone has enlisted another chef to maintain the hotel's dining nous, this time hiring George Lyon to lead the kitchen. Lyon was the youngest head chef to be hired by Gordon Ramsay – first at his London House and then Maze, both in the UK.

"You need to reinvent yourself every three to four years and that's what we're doing," says Livingstone of the hotel's new incarnation.

He's also given the space a face lift to give it a contemporary coastal look. The walls are now painted to reflect the colours of the ocean, and there's plenty of linen and clever lighting; the fittings are handmade using Victorian bluestone by Melbourne designer James Walsh.

The drinks list consists of a variety of wines from Europe – which Livingstone says is thanks to the recommendations of friend and former Wallabies rugby player David Lyons, who now lives in France – along with 20 craft beers on tap. 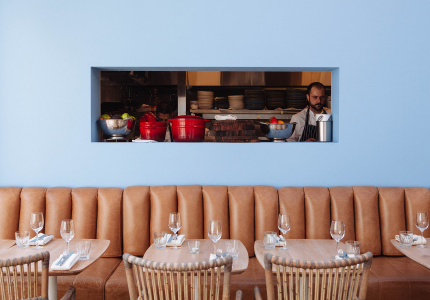