From the team behind Gratia and Folonomo in Surry Hills. 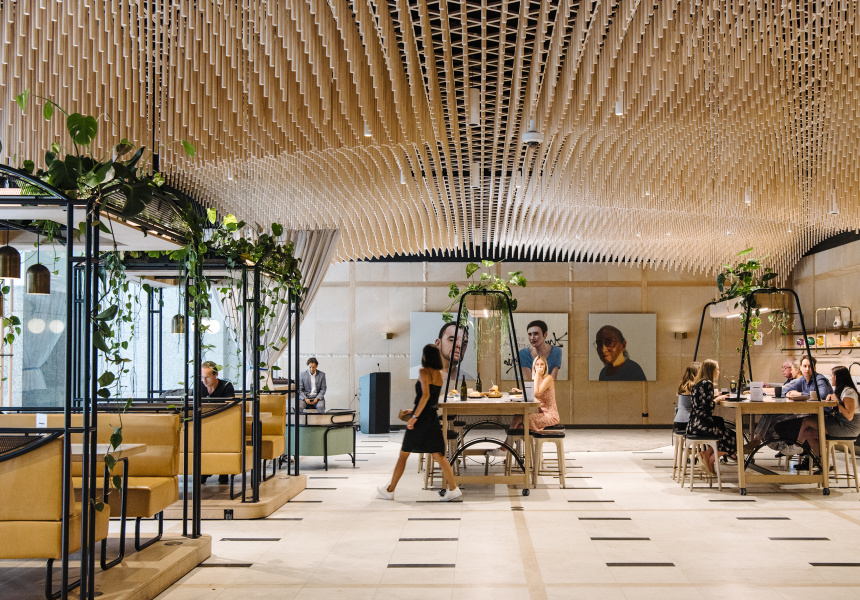 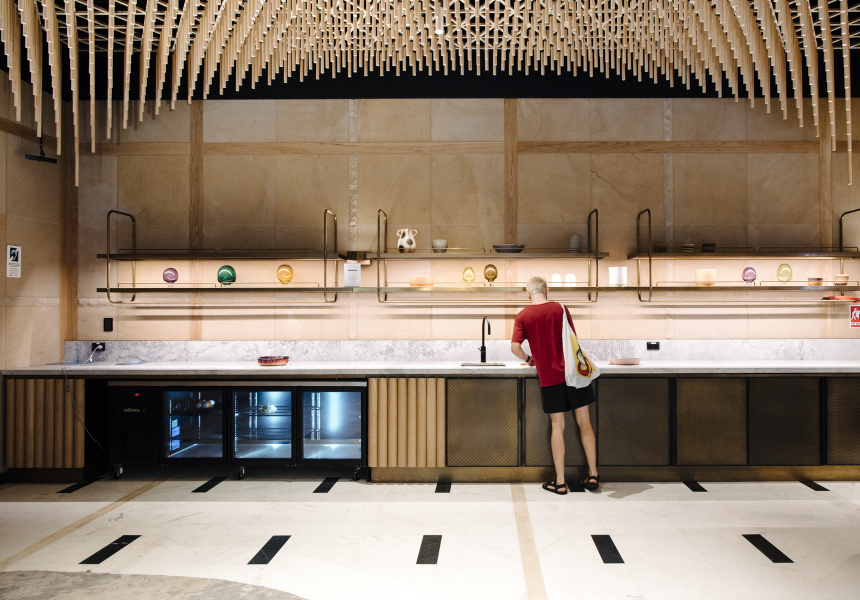 A previously vacant mezzanine level in No.1 Martin Place has been transformed into a communal hub and social enterprise cafe called Portal, which donates 100 per cent of its profits to charity.

This striking, light-filled eatery is the fourth venture by The Pure Collective, which also runs sister venues Symbol in North Sydney and Gratia and Folonomo – Sydney’s first profit-for-good cafe-restaurant – in Surry Hills.

Designed by the award-winning Adriano Pupilli Architects in collaboration with Sydney-based design firm Siren Design, Portal features a dramatic ceiling and arresting lighting, with accents of brass, black and natural timber. The artworks are by artists of Project 504, the in-house studio affiliated with Symbol.

At Portal, diners can choose from one of three charities to benefit from their patronage. There’s Eat Up, an organisation that provides school lunches to Australian children who would otherwise go without; Blue Dragon, which rescues children from slavery and human trafficking in Vietnam; and Rural Aid, which supports rural Australian communities.

Co-founder Nicolas Degryse says expanding the profit-for-good concept into the CBD gives the organisation the chance to create something bigger.

“What we do isn’t just about giving back; it’s about trying to change the way we give back,” he says. “It’s about showing people they can still go about their everyday lives and give back.”

The seasonal menu at Portal was developed by chef Michal Siudeja (formerly of Mecca and The Farmed Table), who relies on produce from small local suppliers. For example, he gets raw honey from beehives on a Surry Hills rooftop and herbs from a farm in Berry, NSW. The single origin and house blend coffees are by speciality Sydney producers Gabriel Coffee.

In the mornings there’s chilled coconut sago pudding with caramelised pineapple and kaffir lime served alongside chia and almond bircher with blood orange. The signature toastie is smoked pork leg, cheese and tomato on Sonoma bread. For lunch, choose from chilled soup, salad bowls, and a selection of sandwiches, including the Reuben (brisket, sauerkraut, swiss cheese, pickle and horseradish) and an aubergine panini (fried eggplant with bocconcini, romesco, and basil pesto).

As well as working to support these charities, some of Portal’s staff are refugees taking part in the Pure Collective’s Symbols of Hope program. Launched last year with Auburn’s Salvation Army, the program offers hospitality training to recently settled refugees waiting to receive their work visas – a process that can take as long as 18 months.

“We want to find a way where it’s not just about training them to be a chef or waitress, but allowing them to be part of a team,” Degryse says. “As we’re not allowed to pay wages, we help them in other ways by paying for their uniform, staff meals, transport, and giving direct donations to the Salvation Army to help find them housing.”