It’s the hospitality group’s magnum opus: an ambitious, handsome seaside eatery six years in the making. Here’s what you need to know before you visit – and what you should eat and drink when you’re there. It might be too early to call it, but Mimi’s may just be the biggest restaurant opening of 2020. It surely will be the most ambitious.

We visited Mimi’s on its opening weekend to take it all in, and to finally eat the food created by executive chef Jordan Toft. We say finally because the venue has been six years in the making. Merivale’s CEO Justin Hemmes floated the idea to Toft over dinner in LA, a year before converted the declining Coogee Beach Palace Hotel into the buzzy seaside venue Coogee Pavilion. (There’s no word on how much the hospitality giant spent on the fit-out, but it must have been significant).

There’s a lot going on here – much beyond its good looks. And while it’s very easy to be swept up with the elegance, the wine cellar, the premium seafood plucked from the ocean and the smart outfits worn by the staff, there are some things you should know (including the fact it’s named after Hemmes’s mother; his father called her Mimi). Here’s a guide to what to eat and what to look out for.

Bumps of caviar and vodka nips from the caviar cart
It’s not necessarily good to know caviar is wonderful, what with it being one of the most expensive foods in the world. But perhaps this is a good place to come to that realisation.

Request a serving of the oily black pearls ($32) and it’ll be wheeled to your table on a cart. The wait staff will pour you a nip of vodka from a bottle encased in a hunk of ice, dip a mother-of-pearl spoon into a tin of Black River caviar (oscietra-style, from Siberian sturgeon farms in Uruguay), then pile the bump of briny goodness onto the back of your hand. It’s not just a gimmick – although doing bumps of caviar does seem outrageous – the warmth of your body actually raises the caviar to the ideal temperature. When that change has occurred (wait a couple of minutes), you take a sip of the ice-cold vodka and consume the caviar in one hit.

It’s creamy and delightful – and contagious. “It’s like a yum cha trolley,” says Mimi’s venue manager Martijn de Boer. “I wheeled it around the other day and people were stopping me saying ‘I’ll have one’, ‘Oh, we’ll have one’. The record so far is one person doing three bumps.”

What to get from the rest of the menu
The first thing you need to know about executive chef Jordan Toft (Bert’s, Bar Topa): he sure can cook. His menu draws from the Mediterranean, but places its ethos and ingredients firmly in an Australian context. The highly skilled kitchen makes all the vinegars, breads, cured meats and butters (there’s a kefir butter to go with the sea urchins, for example), and the seemingly simple dishes belie the complicated culinary techniques. (Case in point: the cannoli that’s made from a labour-intensive process involving leftover bread.)

From the snack menu, you should absolutely order the blacklip abalone skewered on bay leaf with pancetta, which is barbequed on the custom-made Josper grill. “Everything’s a little camp-fire,” says Toft, of the touch of smokiness that permeates most of the dishes. Add in a roasted chicken skin cooked crisp and then smeared with anchovy bread sauce, as well as the fried bun filled with squab, and the puff pastry arlette (thin biscuit) served with warm d’affinois (double-cream soft cheese).

The roasted whole John Dory is deboned at the table and served with a silver gravy boat of sake butter. If you’d prefer something vegetarian, get the salt-baked butternut squash, which arrives with similar tableside theatre. The pipis come in a pancetta broth with pici (thick, hand-rolled pasta) and tiny bit of chilli. (Sydney does pipis well; this is a good addition.) And if you’re rolling with a crew, get the mud crab or the roasted suckling pig (for two people or more) served with finger-lime salsa.

There’s some serious nous in the kitchen
Toft is joined by Jacob Davey, who was head chef at fine-dining CBD eatery Est, which shut last year. Jeff de Rome was head chef at Kitchen by Mike, while Mimi’s venue manager, Martijn de Boer, was previously general manager at Bentley.

Seek out the vintage booze
Boy, you can really drop some cash at Mimi’s. And while it’s not essential to order a cocktail made with rare spirits, it sure is fun. The bar managers Sam Egerton and Ben Wainwright (Merivale group) and Luke Ashton (This Must Be the Place tracked down unopened bottles of booze from across the globe, which they’re using them to make drinks. (It’s not a new concept; London’s Rivoli Bar at the Ritz does it too.)

We’re told these drinks will change as different spirits come and go, but at the moment you can get an Old Fashioned made with Jim Beam bottled in 1974, and a Rob Roy made with Chivas Regal (circa 1970) and 1975 Rosso Antico. 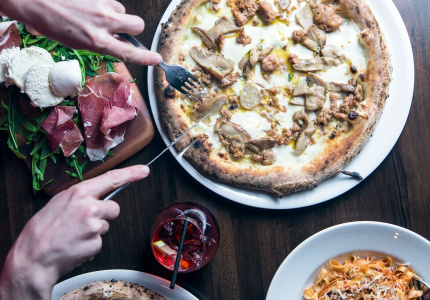