Can a Sydney Restaurant Group Change Our Opinion of Box Wine?

The Australian invention is due for a shake-up says the crew behind Icebergs, The Dolphin and Da Orazio. 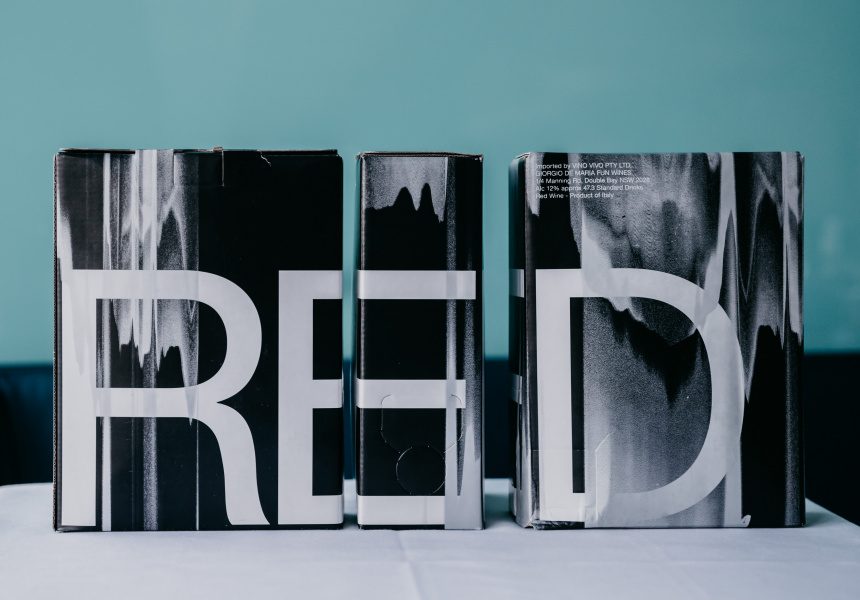 If I say the words “cask wine”, odds are the first thing to pop into your head is Fruity Lexia – that fairly average Coolabah wine sold in five-litre boxes which likely featured at least once in your early drinking years.

It’s one of the reasons box wine – an Australian invention patented in 1965 by Angove winemakers in South Australia’s McLaren Vale – has such a bad reputation and it’s more appropriately called goon, not vino.

“The correlation between alleged lower wine quality, affordability and the image of an inferior vessel from which to drink wine from have all conspired to give cask wine a bad name,” says wine writer and co-owner of P&V Wine and Liquor Merchants Mike Bennie. “Likewise, the purported severity of hangover from the product itself has been an issue.”

But Icebergs Dining Room wants to change the status of cask wine by launching its first “bag in box” wine.

Sold in a handsome two-litre box, the multi-vintage blend is a collaboration between the restaurant and Carussin, an Italian producer in the Piedmont region that farms biodynamically. It’s made from 100 per cent Barbera d'Asti grapes with no additions aside from a low dose of sulphur at packaging, and is exclusively imported by Giorgio de Maria Fun Wines.

The wine is available across the group’s venues – Icebergs, Da Orazio, Bondi Beach Public Bar and The Dolphin Hotel – for $9 a glass, as well as takeaway via The Dolphin wine shop for $55, and was introduced because of a desire to bring costs down but value up.

“I love that you can buy a terroir-driven wine such as this Piemontese Barbera for less than a schooner of beer,” he says. “With increasing wine prices in both Europe and Australia we are looking at ways of keeping wines that are well farmed and direct from producers under $10 a glass. It’s getting harder to find wines that offer good provenance, quality and value. In particular the lower priced wines tend to have an ingredients list that raises eyebrows,” says James Hird, the group wine director.

Bennie says just as beer cans have had a renaissance and wine on tap is seeing resurgence, cask wine is set to present itself as environmentally friendly, convenient, affordable, and perhaps even a little hip in the irony stakes. “It’s a perfectly good and reliable way to store and pour wine, and a place in which innovation can flourish," he says.

Hird says there’s plans to introduce additional box wines in the upcoming month, a rosé, a white and an orange (skin contact). “I would like to get to a point where we are selecting three or four wines a year that we are tasting and packing in cask,” says Hird.

Bennie does tastings each year on cask wine available on the market in Australia and says the Carussin “is the best of best” natural wines brought into Australia (as is the one by Casale). “Owen Latta from Eastern Peake/Latta Vino is working on some too, stay tuned for that. Le Grappin (an ex-pat Aussie named Andrew Nielsen) has Beaujolais and Burgundy in casks too, though we haven’t been seeing much of that in Australia yet.”

Icebergs Bar X Bag In Box is at Icebergs, Da Orazio, Bondi Beach Public Bar and The Dolphin Hotel, as well as for takeaway via The Dolphin wine shop.