Call Your Dentist: A Giant Candy-Themed Installation Has Arrived in Sydney

A first look at Sugar Republic's latest event, which includes a fairy floss room, a swing filled with lollies and a huge bubblegum-pink ball pit overlooking the CBD. 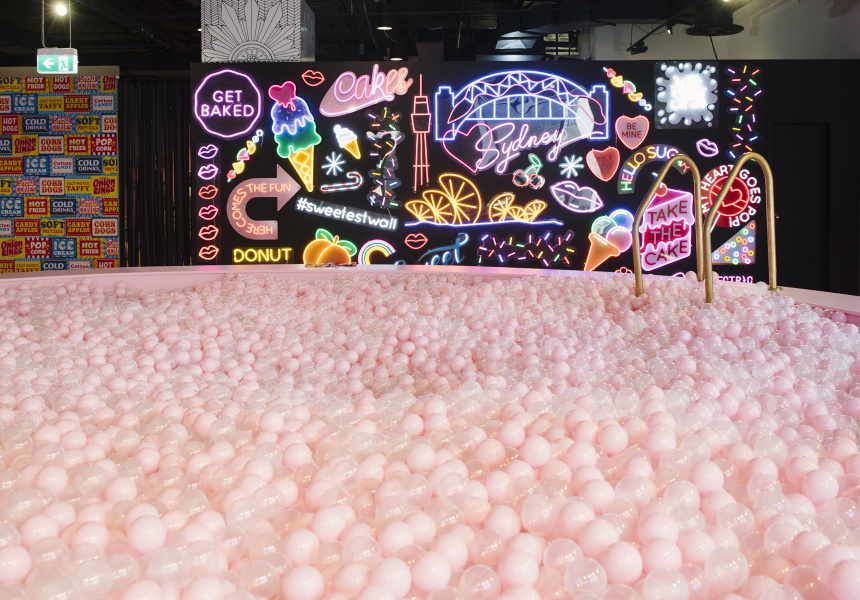 If you’ve ever felt the need to jump out of a giant birthday cake or visit a gingerbread house, and you’ve got a sweet tooth to rival Augustus Gloop’s, we’ve got good news for you. Sugar Republic – the huge art installation that set Instagram alight in Brisbane and Melbourne last year – is now in Sydney.

The pop-up exhibition, which is the brainchild of Allison Jones, is open on the sixth floor of Myer on George Street, and is a colourful homage to some of Australia’s favourite confections, including fairy floss, Golden Gaytime and Bubble O’ Bill.

“[I produced Sugar Republic out of] a desire to create an experience for grown-ups that would bring back the joyful emotions of childhood, a passion for iconic treats, and a love of colour and fun,” Jones told Broadsheet.

At Sugar Republic, guests can play in a huge bubblegum-pink ball pit, sit on a swing in a room lined with fairy floss and win lollies by spinning the “Wheel ’o treats”. There’s also a Charlie and the Chocolate Factory-themed garden to celebrate the new musical, a swing filled with lollies, life-size fairy bread, a giant cookie house and a confetti shower – all designed to bring life to your Insta-grid.

Sydney artist Nico Nicoson (who created the mural at Surry Hills’s Brix Distillery) has worked on a candy-inspired mural for the event.

Jones says they’ve tailored the installation for a Sydney audience. “We’ve always had Sydney in our sights, as we’re big fans of the city and have had so many requests to bring the event to Sydney,” she explained. “But we also wanted to wait until we could create something extra special.”

That something extra special is a “wall of neon” with a specifically Sydney theme, as well as “a cheeky ‘how fruity are you’ wheel [and] wall art inspired by Bondi,” says Jones. For the first time there’s a circular bubblegum ball pit featuring 80,000 balls under a giant dome overlooking the CBD. “You can’t beat the vibe in our giant pink ball pit,” says Jones. “It’s the happiest place ever, where everyone loses their inhibitions and brings out their inner child again, just for a little while.”

There are also new iterations of long-standing displays such as the Liquorice Playroom (which involves smell, sight and touch), Biscuit Cottage (which is “the sweetest thing ever” says Jones), Big Gum Bubble and the fairy floss swing. “It’s all new and is our biggest ever experience.”

Sugar Republic is on the sixth floor of Myer George Street City until the end of May.