A Cafe on West Juliett

Tucked into the suburban backstreets, this Marrickville cafe features a hearty home-style menu. Setting up in what was once an old grocery store, West Juliett has joined the Marrickville cafe fray. With so much going on in the suburb, it’s tough to stand out from the crowd, but they’ve managed it here by combining a quiet residential corner location, attention to detail, slick and simple design and a menu that feels like home.

“It closed as a grocery store in the 1960s and it has been derelict every since,” says owner John Stavropoulos, who can be found behind the La Marzocco espresso machine.

“We always drove past, because we live in Marrickville, and we thought it was such a shame that it was just sitting there. Eventually we contacted the owner and expressed our interest.” The rest is history, with the cafe opening quietly just five weeks ago and the finishing touches still going in.

Coffee is roasted by White Horse and is available to take home with the blend ratios listed on the blackboard. Extra attention is paid to the teas as well, with steeping time noted and leaves removed from the pot for a perfect brew. There’s something simple and clean about the well-designed space, which is hardly surprising considering Stavropoulos and his brother have had a hand in Redfern’s Cafe Zoe and Chippendale’s Cafe Giulia respectively, also doing time in the kitchen at 121 BC.

“I got tired of the really masculine, scientific approach to food,” he says. “Here, we wanted to do something humble and almost homely. It takes a leap of faith for you to do a kale salad the way you like. Luckily other people seem to like it too.”

Polished concrete floors, crisp whitewashed and tiled walls, honey toned wooden tables and a view to the open kitchen mean there’s no clutter. The beautifully presented and executed dishes include mushroom, caraway, kasseri and burnt onions on toast, and olive oil fried eggs with braised lentils, morcilla, rocket and parmesan. There are fresh daily house-baked pastries and sweets too, with trays of the bakery goods teasing you from the front counter.

And the name is a nod both to the location (on corner of Juliett Street) and the history of cafes named after girls that runs in the family. There is a licence in the works and future plans for monthly dinners. 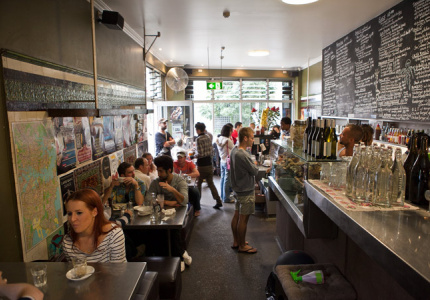