We’re almost used to it now, but it feels like queuing for your morning coffee, or a table for breakfast, was something that happened overnight in Sydney. We take a look at the radical progression of our local cafe scene and coffee culture, and chat to some of the players responsible for it. 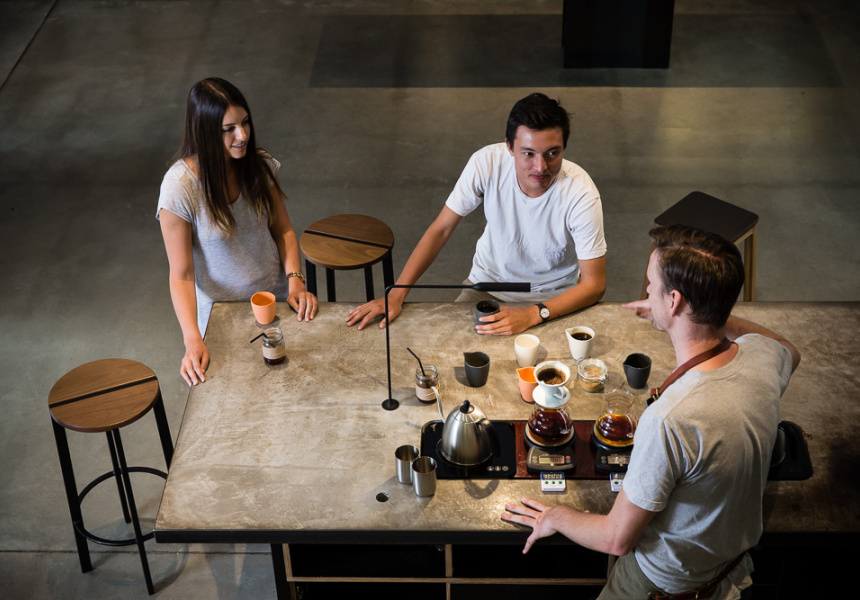 Hazel Des Los Reyes knows it pays to trust your instincts. A decade ago, when the champion barista and micro-roaster first poured her lifelong passion into a neighbourhood cafe in leafy Dulwich Hill, drinking coffee in the Harbour City was a means to an end (that end being simply to wake up), not the end in itself it has become.

“I needed to attract customers with banana bread and sandwiches to get them interested in staying for coffee,” laughs Des Los Reyes. “Eventually I sold the space and started a new roastery on a premises in Addison Road. I started delivering 250gram bags of beans to local residences and studied for a certificate in workplace training so I could supplement my roasting pocket money. Slowly, slowly more people became interested. They started trickling in one by one.”

Unfolding in a spacious garage, Coffee Alchemy is as much a part of Marrickville’s industrial streetscape as the hulking factories that surround it – until you step inside. Here, concrete floors and a trio of inverted canisters – filled with beans named after famous alchemists – are a front for what feels like a makeshift lounge room, complete with people tapping away on computers, flipping through magazines and newspapers and generally settling down into the comfortable space for their morning coffees.

“We roast everything in-house each day and use contrasting approaches to get different results each time,” says Des Los Reyes, whose adventurousness is also reflected in Coffee Alchemy’s dizzying spectrum of coffee mediums – three single origins, six filters, a house blend, a pour-over and a cold drip. “Brewing methods that were rubbished when I started are now becoming more popular,” she says. “Back then, nobody anticipated the diversity in brewing methods or the quality of the coffee we were going to get hold of. I’m glad that all of us in the specialty coffee industry have followed this path.”

But this revolution does not belong to industry alone. Anyone who’s witnessed the endless queues or hour-long waits that tend to mark Sydney’s new wave of cafes would know that industry obsession is only half the equation. In the last few years, spending a sun- dappled Saturday over baked eggs and a short macchiato or convening with friends at the latest artfully restored coffee warehouse have rivaled cliff-top walks and beachside jaunts as this city’s most seductive pleasures.

Des Los Reyes’ latest project, Gumption – a slick, shoebox-sized operation housed in the CBD’s historic Strand Arcade – is a direct result of this citywide infatuation not just with coffee, but also with the experience surrounding it. “When customers come and like it, word spreads like wildfire,” says Des Los Reyes. “We built Coffee Alchemy from quiet to busy, but Gumption was busy from the beginning.”

For Des Los Reyes, every great expectation has its own set of downsides. “I’ve found that we’ve spoiled our customers. We’ve always bought beans from different climates, regions and countries, but because we started out with a lot of variety, customers expect that level of choice week in and week out.”

“It’s funny, because our palates have obviously changed,” agrees Russell Beard, who converted a Surry Hills printing factory into Reuben Hills, a sleek coffee house and roastery in 2011. “The coffees we used to enjoy five, six years ago are very different from the coffees we enjoy now.”

Beard would know. In 2007, the barista and roaster – who's worked in the industry since 2000– opened The Source, a Mosman cafe that blazed early trails courtesy of a meticulous sourcing processes and his in-house Clover – an American coffee machine designed for cup-by-cup drip coffee brewing. The Source also schooled Beard in the challenges and prerogatives of direct trade, the model that sees cafe operators establish relationships with farmers in coffee growing climes across Africa and Central America.

However, it was Reuben Hills – which doubles as a shrine to polished minimalism thanks to concrete floors and cutouts offering glimpses of the upstairs roastery – that would define Beard’s trajectory. And more importantly, it was this imaginative space – along with the likes of sprawling, permaculture-heavy caffeine haven The Grounds of Alexandria – that would help alter the course of cafe culture in Sydney.

A typical Saturday morning scene at Reuben Hills sees couples and families snake outside the cafe, the pavement heaving with groups of friends retelling last night’s anecdotes and soaking up the scene. Inside, waiters balance plates piled with Central American breakfast baleadas, while a Synesso machine distilling single-origin beans sourced from three different countries is a purring counterpoint to the hip-hop soundtrack. It’s a buzzing, slick operation that’s executed with absolute precision and attention to detail, which is why people keep returning day after day. Like many new-wave cafes, the experience of Reuben Hills – food, space and coffee – is a package deal. One element is not sacrificed for the sake of another.

“When we started Reuben Hills, things exploded,” Beard recalls. “I think social media was a big part of it, customers were checking- in and using Instagram. I think it’s great but the hype can be really problematic – when you’re packed all of a sudden, you have to make sure the coffee always tastes great and the food is always good. When I started The Source, it was 12 months of hard slog and every week you’d see your customer base grow by a few more people. These days, cafes can be an overnight success. It’s scary from a business perspective – you ask yourself, ‘will these people still be here tomorrow?’ I guess it’s interesting how things have shifted.”

This shift has been geographical as well as cultural. Five years ago, you’d be hard-pressed to find a flawless flat white outside Surry Hills or the Inner West, but these days operators such as Parramatta’s Circa, Ashfield’s Excelsior Jones and White Horse Coffee in Cronulla are toppling the city’s tired coffee hierarchies. And Bondi, an area once associated with lukewarm cappuccinos, serves as the beachside backdrop for the St ALi Sensory Lab, where copper piping and elaborate Hario syphons could see it serve as the lair of a fastidious chemist – if it wasn’t for the heady scent of roasting beans.

Along with geographical expansion and a considered approach to design, new technology has added to our appreciation of brewing and serving coffee. Beard says it’s no coincidence that Sydney’s cafe explosion correlates with a new appreciation of single- origin beans and the revival of brewing techniques such as filter, pour-over and siphon that make it impossible to hide the sins often disguised by espresso.

“In the States, the medium is all filter and in Australia it’s always been espresso because the Italians brought it here in the ’50s and ’60s,” he explains. “Now we want to serve filter because it’s a great medium for expressing flavour and taste. Filter is coffee served in its simplest form. You can manipulate the flavour depending on how you extract it – you can’t hide anything. The palate becomes very aware of roast and flavour.” The new wave of cafe customers is more aware of what’s available now, more interested in trying new things, and more informed about what they’re buying and drinking.

A few blocks away from Reuben Hills, a group of friends huddle around a communal table at Paramount Coffee Project, swapping stories in between cups of filtered Ethiopian Michiti. An aproned barista pulls caramel liquid from a gleaming Strada espresso machine while a trio of glass chambers, lined up with Spartan precision, lures curious onlookers with pour-overs on ice.

When the striking, white-tiled Paramount Coffee Project opened in the foyer of Surry Hills’ Paramount House late last year, its stripped-back elegance made it easy to overlook its audacious ambitions. The cafe serves up local interpretations of single-origin beans, features a filter bar where visitors can exchange tasting notes with the person brewing their short black and hosts month-long residencies staffed by cult roasters from overseas.

“I was approached to open a cafe in the Paramount Building and I really wanted it to be something interesting that took a new approach,” says Mark Dundon, who established the Paramount Coffee Project along with Beard. “I wanted to explore coffee from around the world as well as the way Australian roasters could offer different interpretations of a particular single-estate coffee. It’s something that really hasn’t been done before.”

Dundon is well versed in boundary breaking. The entrepreneur and micro-roaster, who opened much-loved South Melbourne cafe St ALi before launching inner-city coffee temples Seven Seeds and Brother Baba Budan, is credited with helping spearhead Melbourne’s third wave – a school of coffee consumption that diverges from the second wave’s espresso obsession by focusing on ethically sourced beans from single estates and left-field extraction techniques such as filter, syphon and cold-drip. But by inviting local operators to present espresso and filter versions of single-origin blends and collaborating with the likes of Danish specialty coffee maestros Coffee Collective and downtown LA’s G&B Coffee, Dundon’s Sydney venture has taken his third-wave missive to a new level. Still, Dundon admits the city’s response has taken him by surprise. “Our concepts have been fairly adventurous but they’ve also been a real hit,” he says. “We didn’t expect people to be so welcoming.”

Dundon is forgetting that like most frontier towns, risk-taking is part of Sydney’s DNA – even if it takes a while to be rewarded for it. In the 1950s, coffeehouses such as The Strand Arcade’s American Coffee Lounge and Galleria Espresso seduced a city of tea drinkers with oversized chrome espresso machines, inviting interiors and soulful, dark roasts. More than 40 years later, specialty-coffee mavericks such as Campos and Toby’s Estate countered the blandness of second-wave coffee chains by buying beans directly from growers, roasting them in alleys and garages and cultivating flavours such as toffee, blueberry and chocolate. And in the last decade, boutique operators such as The Golden Cobra, The Little Marionette and Coffee Alchemy started experimenting with roasting styles, temperatures and ratios, creating light, silky brews that reflect our evolving palate.

For Russell Beard back at Paramount Coffee Project, Sydney’s cafe evolution owes less to industry missives than it does to customers’ readiness to make these spaces their own. “In the last few years, customers have become clearer about what they like and they’d prefer to steer away from franchises and instead support independent [cafes],” he says. “It’s become a lot easier to find good cafes in Sydney because of the way the community we serve has responded.” 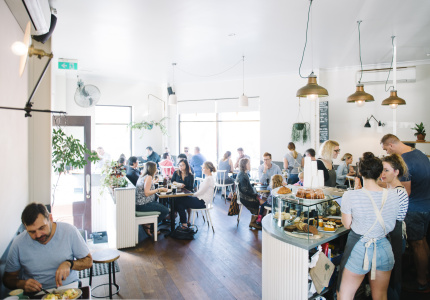 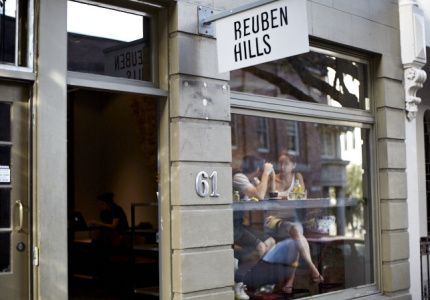