New cafes are opening constantly. In partnership with Vittoria, we’re shining a light on the best recent entries, whether they’re pushing the genre forward or simply excelling at the familiar. Fine-dining techniques are no longer novel in daytime kitchens. For several years now, there’s been a steady trickle of talented chefs leaving restaurants for the friendlier hours offered by cafes. Harry Kolotas is one of them. He runs Cavalier 2.0 with his partner Sara, and much like Clayton Wells and Tania Fergusson at A1 Canteen, they’re lifting Sydney’s cafe food to new heights.

Where else can you find breakfasts such as passionfruit tiramisu, mac’n’cheese with mushroom cream, and a house-made smoked ricotta-burrata hybrid with agave juice and Jerusalem artichoke crisps? Perhaps even more radically, Cavalier 2.0 is avocado-free, though it does offer simple comforts such as the crowd-favourite ham and cheddar jaffle and a salad of poached chicken breast, sweet potato, alfalfa, quinoa and nuts.

The site is also licensed and offers house-made fermented juices – the kind of thing high-end degustation restaurants have been doing ever since Noma introduced non-alcoholic pairings as an alternative to wine. Another step in that direction is the locals-only multi-course dinners held every Saturday. Relatively few people are capable of working to this level, but we expect to see more cafes following Cavalier’s lead in the coming years.

Sydney’s full of excellent bakeries, whether you’re after a loaf of handmade sourdough or a delicate macaron. And yet, when goods from Brickfields and its ilk are such a common sight in sweets cabinets across town, it’s exciting to go somewhere with a truly singular offering. Rollers certainly has that.

Co-owner James Sideris is a self-taught baker who began wholesaling boundary-pushing muffins as Butter Boy Bake. Here, though, he’s all about croissants. The classic twice-baked almond croissant, for example, is reimagined with a blackberry and pistachio filling, and Rollers take on pain au chocolat is a charcoal-dyed pastry stuffed with double-chocolate crumble.

Savoury versions include a garlic, gruyere, rosemary and thyme number, and cheeky “sushi roll” of ginger, nori and wasabi inside charcoal-dyed dough. Drop in at the right time and you can watch Sideris at work in a theatrical glass cube, much like that found at Lune in Melbourne.

Baked goods are best enjoyed with a coffee, and Rollers has that wrapped up too. Beans come from Okay Coffee, a collaboration between Sideris’s business partner Bo Hinzack (who also runs Showbox Coffee Brewers nearby) and Aaron Wood of Wood and Co Coffee Roasters in Melbourne. Again, though Sydney is flush with world-class roasters, it’s refreshing to taste something

Considering Ethiopia’s strong coffee growing and drinking tradition, a cafe repping the African nation makes a lot of sense. Case in point: Alem’s House, which started life as a pop-up at markets in Kings Cross, Marrickville and Berowra. Coffee is brewed on a La Pavoni and while you can have a short black or a flat white, we’re most excited about the Ethiopian versions spiked with combos such as cinnamon, cloves, chilli and korarima (smoked cardamom).

Early in the day, you might take your coffee alongside chilli scrambled eggs with spiced Ethiopian butter, or teff pancakes topped with strawberries and macadamia nuts sourced from co-owner Nicholas Gilmore’s property in Byron Bay. At lunch, the menu goes vegan and more traditional by way of atakilt wat, a turmeric- and ginger-laced green bean and potato dish, and misr wat, a spicy red lentil number. Such spicy, earthy, pungent flavours might not sit well with everyone’s palate so early in the day, but they’re an invigorating addition to Sydney’s sometimes same-y cafe scene. 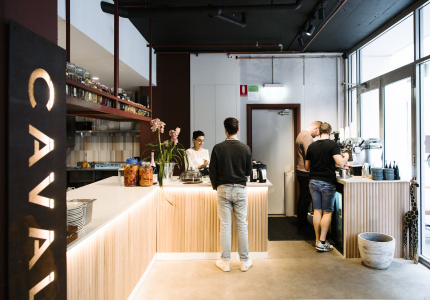