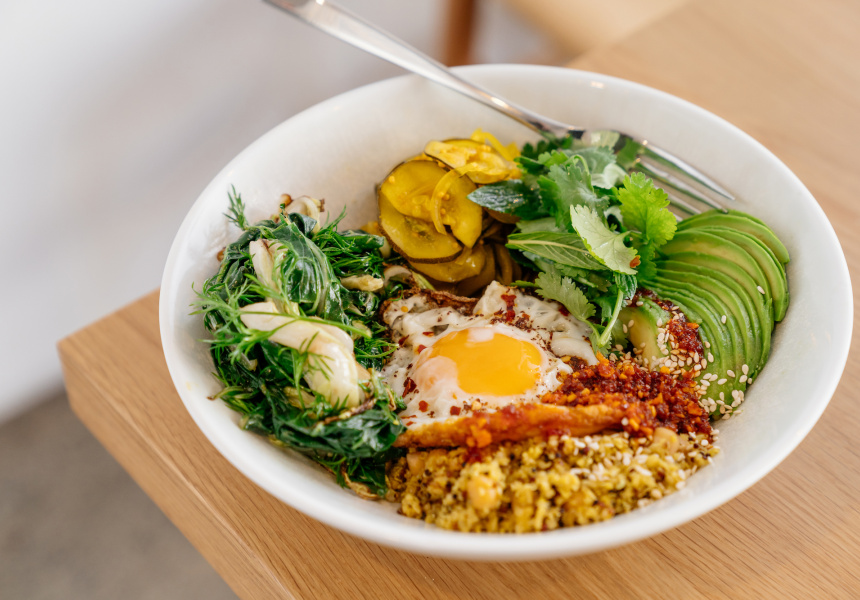 Cherry Moon
This grocer, bakery and cafe feels like it’s been open for decades, not months. That’s partly down to the design: mismatched wooden chairs pulled up to long communal tables, floral arrangements framed by firewood, and exposed brick. Outside it continues with wobbly-looking benches and cutesy murals on the walls. It all feels very Country Women’s Association-meets-Pinterest.

The stacks of firewood aren’t just for show. Working with a custom-built woodfired oven, Gastmeier is baking some of the best sourdough in the inner west. Her fig-leaf loaf is a particular highlight, but we’re also into the shortcakes filled with jam and cream, lavender Portuguese tarts, and doughnuts topped with glacé cherries. More substantial meals are also available at the counter: smashed avo, woodfired pumpkin with burrata, and ploughman’s boards with plenty of pickles and ferments.

While you’re here, visit the small grocery section for butter, creme fraiche, ricotta, tea blends, gelato and magnesium oil – all of it made at Cherry Moon.

Saga Lyte
When Andy Bowdy was pastry chef at Newtown’s Hartsyard, he was renowned for his inventive and outlandish desserts, such as a cone of soft-serve presented upside-down on a plate. Later he started his cake business and, after that, opened Enmore’s Saga.

Saga Lyte, which opened at the start of August, is inside The Exchange, the imposing hive-shaped building at the centre of the new Darling Square development. The selection here is a best-of Saga; there are favourites from the Enmore mothership such as vanilla slices, mini cakes, cheesymite scrolls and the Insta-famous star-shaped pies.

It’s a smaller space than the original, so everything is baked at Enmore in the morning and brought over. But make no mistake, this is no Saga “lite” – this little cafe is on its way to becoming its own beast. The “Lyte” is just a cheeky tribute to Bowdy’s favourite Asics sneaker model.

Quick Brown Fox
Quick Brown Fox’s flagship dish – a bowl of congee served with five other ingredients and topped with fried chicken – sounds a misguided and over-the-top attempt at fusion. But when Broadsheet visited earlier this year we weren’t just impressed by the congee – we think it’s a contender for breakfast dish of the year. It’s made from koshihikari – a premium Japanese short-grain rice – and comes topped with a chilli fried egg, enoki mushrooms, maple-glazed bacon, grilled cabbage and chilli relish. Fried chicken or king prawns are optional but highly recommended. Sure, there’s a lot going on, but the balance is nailed.

The dish succeeds for the same reason Quick Brown Fox does as a whole: attention to detail. Siblings and co-owners Ben and Emily Calabro are a pair of hospitality pros who, recognising that Pyrmont has been in need of an all-day eatery such as Quick Brown Fox for a while now, timed their opening perfectly. They backed it up with clever hires in head chef Kido Kwan (who’s cooked in kitchens around Sydney’s east for years) and Tomislav Martinovic, who once worked at Heston Blumenthal’s The Fat Duck, to consult on the menu design.

A visit to Quick Brown Fox is relaxed and easy, which is a testament to just how much work has been put into achieving that feel. The final thing missing from QBF’s all day vision was an alcohol licence, which it secured in August. That means you can now have a Bloody Mary with your congee in the mornings, or you can Martini your espresso in the evenings.