A Cafe for Dog Lovers in Erskineville

Soft-shell-crab Benedict for humans, and doughnuts, smoothies and doggie chinos for pups. 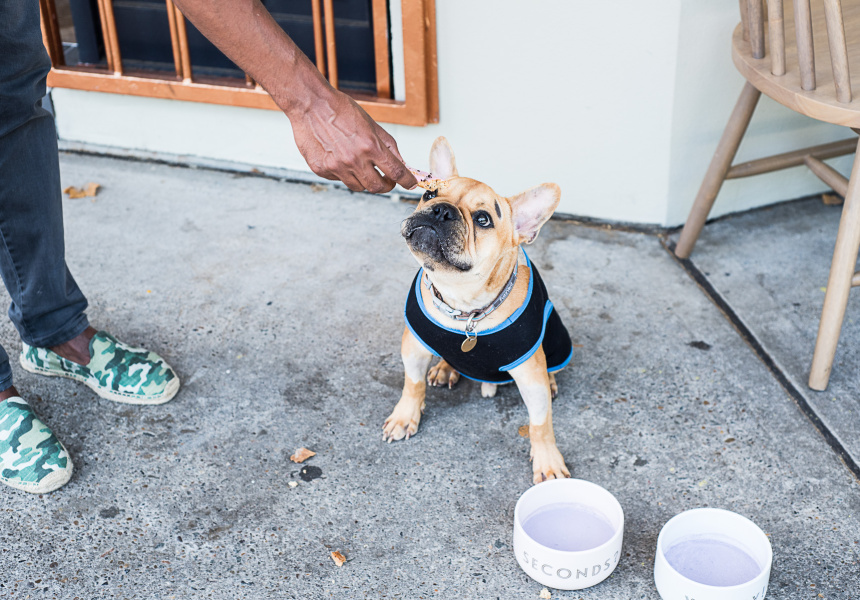 Despite some impressive ideas and visuals, the most unforgettable thing for most diners at new cafe Naked Brew is likely to be the lifestyles of the local pooches sitting at the outdoor tables. Where else in Sydney can a French bulldog and a Maltese poodle get a carob-and-peanut-butter “domut” (that’s a dog doughnut) or a doggie chino with goat’s milk and sprinkles of liver?

“All cafes these days need specialty items,” says owner Kevin Luu (ex-Euforia Balmain). Here you can find them (the ones for humans, that is) on the front page in the “Unbelievable/Unforgettable” section. There’s a spongy buttermilk waffle with crackling-topped five-spice pork belly, slivers of Granny Smith and wasabi mayo; a lightly cured salmon fillet with freekeh, charred corn and a pomegranate yoghurt; and, instead of eggs Benedict there’s a whole soft-shell crab Benedict with daikon, fried onions and Sriracha hollandaise. “We'll also be incorporating new items. Next month I'd love to offer spaghetti bolognaise on toast,” says Luu.

Flip the menu over to the Everyday Goodness page and you’ll find simple avo on toast, a bacon-and-egg roll and granola. There’s also a pork belly, green apple and gouda burger; sandwiches; salads and coffee from Stanmore powerhouses Five Senses. It’s becoming a trend in Sydney to divide the menu up this way.

Luu hopes Naked Brew becomes known for its experimentation. It has designed the cafe (with CCP Studios) with that in mind. “I didn't want it to be the same as other cafes. I didn't want exposed filament light globes, I don't want metal chairs, I don't want rustic. I need clean design, clean lines,” he says. The cafe is fit out with wishbone chairs, long LED lights (by Lights from Liam) and tiling from Rozelle’s Skheme.