In a former appliance store, it’s serving sourdough crumpets from Scrumpets with a fairy-bread topping, bagels from Small Talk done like a Reuben, and Tuga pasteis de nata. Plus, Ona coffee. By George opened in Croydon Park four weeks before Sydney’s lockdown in June. To owner Steven Nestoras’s surprise, it turned out to be a good thing for the fledgling cafe.

“It was kind of a blessing,” he tells Broadsheet. “We’re part of Burwood Council, which was an LGA of concern, and coming out to try us was one of the only things people could do within their five-kilometre radius.”

Unlike many venues that aim to perfect their own versions of house-made products, By George instead collaborates with the best producers in Sydney and beyond.

“Our mentality is if we can’t do it better, we don’t want to do it. I’m not going to try to make a croissant if someone else is doing a great job of making croissants.”

Bagels come from Small Talk, sourdough crumpets from Scrumpets, and pastries (including pasteis de nata) come from Tuga. In a way, By George is helping the hospitality ecosystem to thrive. But that doesn’t mean products are brought in and served as is.

The Reuben is made on a dark sesame seed bagel piled high with pastrami, pickles, cucumber, sauerkraut, pickled onion and swiss cheese. The chicken parmigiana has ham, marinara sauce, and generous pieces of tender chicken schnitzel capped with melted cheese. Fluffy, spongy crumpets come topped with Lotus Biscoff paste and biscuits, or hundreds and thousands for a “fancy” version of fairy bread.

By George is Nestoras’s second full-time job. He also works as head of business development at Ona Coffee and has no plans to leave. The relationships he’s developed through that role mean he can source the best products for By George. It also means the best coffee.

“Ona’s Maple is the house blend. It’s got chocolatey, caramel tasting notes. Raspberry Candy is our second milk offering. Sasa Sestic, the CEO of Ona, won a 2015 barista championship for that coffee and Ona is well known for it. Blacks are on a rotating single origin.”

Nestoras kept the changes to the former appliance store simple, with natural wood furnishings and flooring updating the charming building. The cafe’s uplifting red and pink colour scheme dominates the menus, takeaway cups and the logo on the back wall.

Even though By George is Nestoras’s first cafe, he believes things will go well despite the uncertain times. “I’ve been in the industry the last 15 years. I’ve worked for Toby’s, Campos, Ona, and have been lucky to see a lot of successful businesses. I’ve tried to learn what makes a business succeed and fail and apply that here. I felt like it was just something I had to give a try. I couldn’t get to the end of my life without doing this.” 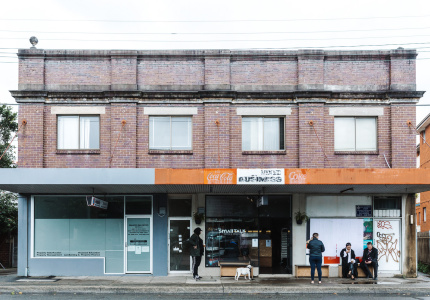