Everyone is talking about these outrageous Dee Why burgers. 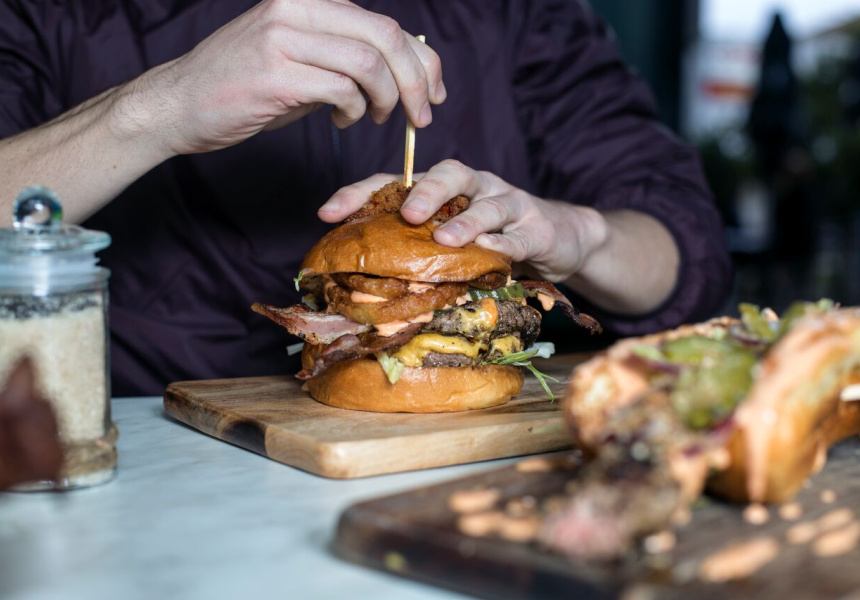 Two guys approach the counter at Danno’s Cafe, one in a bucket hat, tracksuit pants and sneakers, the other in all adidas. Bucket-hat guy swings his arms in the air like a DJ at a ‘90s house party and says: “Hey. We heard you guys have epic burgers?!”

As soon as Danno’s owner Daniel Litkoutli and chef Josh Arthurs put the Primo on the The Fatties Burger Appreciation Society Facebook page – a group with more than 10,000 members – it took off. There was an instant surge in business. Now Litkoutli says people have been coming from as far as the Central Coast and St Mary’s get a burger.

Arthurs also runs weekly burger specials. Last week it was the Big Mick, Arthurs’ take on a Big Mac. Litkoutli says Arthurs was fastidiously testing different sauces in their tiny kitchen until he had it just like a Big Mac, but better. "It's how I reckon a Big Mac should be,” Arthurs says.

Next is the mysteriously named Flavour Quest. The only information we have been given is that it’s an embellished breakfast burger. The breakfast burger Danno’s has now, with double eggs, crispy bacon, homemade barbeque sauce and hash browns, is insane; we can’t imagine what an embellished version will be like. Whichever of Arthurs’ burgers you do decide on, make sure you get chips. They’re beer-battered, twice-fried and caked in sea salt, making them crunchy with fluffy innards.