The Hunter Valley winery takes it up a notch. 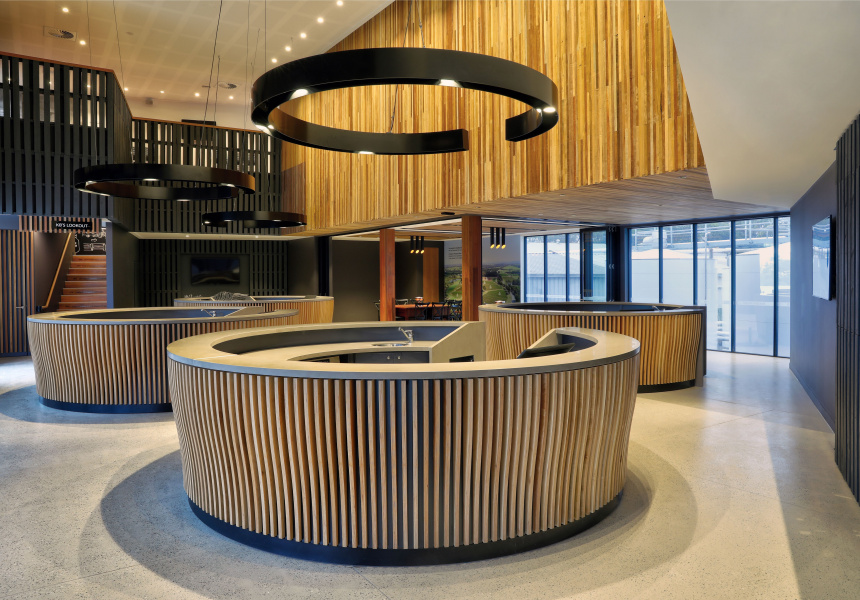 Brokenwood Wines might have started as a weekend venture for hobby winemakers in the 1970s, but this weekend it cements its status as a big player in the Hunter Valley wine region by opening a new cellar door.

The $8-million development, a year in the making, will open this weekend and make the winery one of the largest in the area.

“This is a monumental step in our brand’s history and we are beyond excited,” said Iain Riggs, Brokenwood managing director and the chief winemaker since 1982, in a statement.

The original, quaint cellar door from 1975 has been morphed into a 1400-square-metre complex that will include a large tasting room (and private tasting rooms), an expansive outdoor terrace, a wine museum, a lounge area and two dining rooms – the casual breakfast and lunch eatery Cru Bar + Pantry, and the fancier, 90-seat Wood Restaurant (which will open for lunch and dinner on Fridays and Saturdays).

The restaurants are under the direction of Andrew and Janet Wright, who are known for The Cellar Restaurant at nearby Hunter Valley Gardens. There will be a strong seafood focus, with ingredients sourced from the Sydney Fish Market. On the opening menu will be oysters and caviar, salt-cod fritters, and clams with a ’nduja, caper and anchovy butter. It’s a much more laid-back affair at the Cru Bar + Pantry, with pies, toasties, woodfired pizzas and cheese and charcuterie.

Brokenwood wine will of course be available at the two venues, including its ILR Reserve Semillon and the flagship Graveyard Vineyard Shiraz (it’s the only Hunter Valley shiraz with a sought-after “exceptional” status in the Langton’s Classification of Australian Wine).

Brokenwood expects to welcome more than 250,000 visitors annually at its new digs. Those numbers aren’t a surprise; the sophistication of Australia’s oldest wine regions continues to gain momentum. Opposite Brokenwood is another large-scale cellar door, Tempus Two, complete with helipad, and Hope Winery often throws huge concerts. The oldest vineyard in Australia, Dalwood Estate, (established as Wyndham Estate in 1828) was closed for five years and has just been reopened.

Brokenwood was founded in 1970 by Tony Albert, John Beeston and James Halliday, who has gone on to be one of Australia’s most famous wine writers.