It’s considered one of Australia's best restaurants but up until today you had to go to Adelaide to eat there. It’s come to us and over 24 courses there's crocodile-belly lardo and bunya-nut miso that’s been fermenting for two years. The playlist was created by Jimmy Barnes and Zonfrillo made its sign from kangaroo skin. 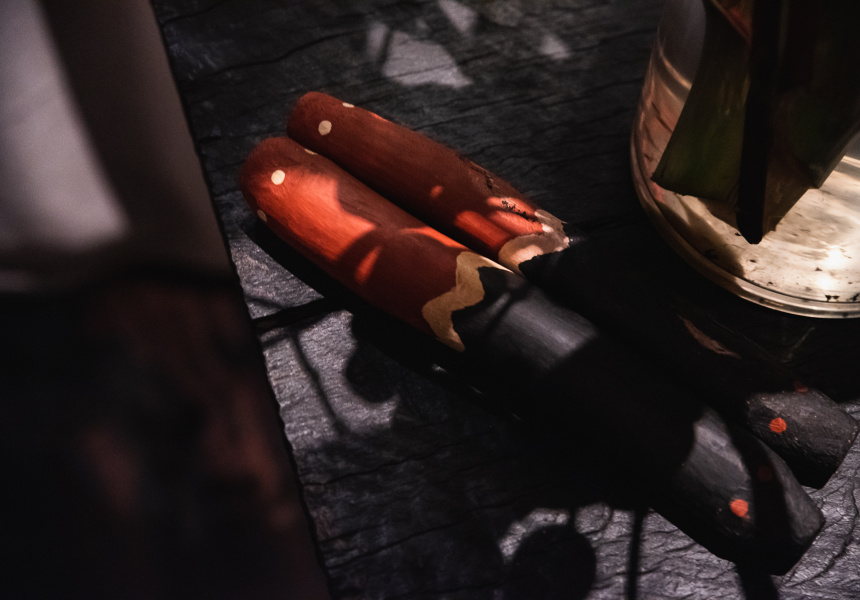 Jock Zonfrillo is standing in what was, until recently, Longrain’s storied kitchen, carving segments from a peeled poor man’s orange. He arranges them neatly on a tray, ready to be warmed gently in the large smoker that lived, until even more recently, in Restaurant Orana’s kitchen in Adelaide.

“These fucking oranges,” Zonfrillo says of the obscure fruit, a hybrid of tangerine and pomelo with dense flesh and an addictively sweet-savoury tartness. “They really got me. They’re the most refreshing, beautiful things ever.”

Supplied by citrus grower Peter Dryden, they’re one of the many uncommon ingredients diners will be introduced to when Orana’s one-month Sydney residency kicks off this week.

Dressed with a few leaves of native river mint and a fatty lamb jus gras (dripping and gravy) – made by spit-roasting an entire lamb for 12 hours before squeezing the whole beast into a duck press – the dish exemplifies Zonfrillo’s approach to cooking.

“We’re produce-driven,” he says as the 40-strong team of floor staff (there's 100 staff in total), boosted significantly from Adelaide’s original squad of four, preps the dining room around him. “There’s no smoke and mirrors; this is about keeping the ingredients front and centre.”

The groundbreaking chef, who trained under British chef Marco Pierre White, is at the forefront of cooking with Australian ingredients and advocating for the communities that produce them – an approach that won him a major European prize that recognises those “transforming society through gastronomy”.

Among the native flavours diners can expect during the 24 or so courses of the $350 tasting menu at Surry Hills are crocodile belly lardo (served with a grilled prawn and boab fruit powder) and bunya nut miso that’s been fermenting for two years (part of the emu-egg custard dish). There’s also a shoyu made of kangaroo grass and barbed-wire grass (or cymbopogon) that’s been aged for 19 months or so and served with native currant and a smoked quail stuffed with warrigal greens.

There are hints of genuine glee when Zonfrillo talks about many of his favourite ingredients – the poor man’s orange is just one example – but it’s the de-boned quail carved by chefs at the table, that gets him buzzing.

“There’s the theatre of that moment, but then the simplicity of a quail cooked beautifully in a smoker. You pick it up, dip it in the sauce and eat it. There’s nothing else. You don’t fucking need anything else.”

There’s theatre in the bread, too. Orana’s wattleseed-spiked dough (ingratiated into Sydney with a hit of local dough gifted by Sonoma) is waiting at the table when you arrive, uncooked, proving under a glass dome. “The waiter explains the bread and takes it back into the kitchen and it’s cooked to order. It comes out of the oven, it rests briefly, and then we serve it with macadamia butter,” the Scottish-born chef says.

Native ingredients are Orana’s – and its chef’s – raison d’etre. The restaurant exists to educate people about Zonfrillo’s Orana Foundation. Zonfrillo has been foraging around Sydney with Eora Nation elders and working with local Australian food growers to supply the pop-up. The organisation empowers and supports Indigenous communities to successfully commercialise native crops, and building the foundation’s profile is the reason he has temporary relocated the 30 seater to Sydney.

“We’re here to bring awareness to the foundation,” he says. “We hope that when people eat here they start to think about Indigenous culture and its people differently. Food’s the medium for the message.

“That’s the restaurant’s purpose – to bring acknowledgement to Indigenous people.”

To that end, the venue’s few available bar seats, each with a prized view of the kitchen, are held exclusively for Indigenous culinary apprentices, who are also invited to spend the day working with the chefs.

In the dining room, the smells of native ingredients emanating from the kitchen are mirrored by those coming from above. Longrain’s lofty, exposed ceilings have been shrouded in extravagant floral installations designed and constructed by local artist Tracey Deep. Boughs of dried native flora hang over each table, casting landscape-evoking shadows across the newly painted ochre-coloured walls.

“I didn’t want just a bunch of flowers,” Zonfrillo says of the brief he gave Deep. “That’s not good enough. I wanted scale. I wanted the aroma.”

Orana’s native timber tables, with their distinctively charred legs evoking a fire-ravaged bush, have made it over too, bolstered by a swathe of new custom-made furniture. They’re additions necessitated by the jump from 42 covers a night in Adelaide to more than 140 in Sydney.

Plates, platters and bowls have been crafted exclusively for the month-long pop-up; Zonfrillo engaged 17 ceramicists and six wood-turners, all of whom had less than six weeks to deliver their wares.

The room is rounded out by Indigenous artwork curated by Darlinghurst’s APY Arts Centre Collective – much of which is for sale – and a dazzling array of Aboriginal weaponry, cultural iconography and craft from Zonfrillo’s own collection, including didgeridoos, boomerangs, hunting spears and a funeral pole.

The soundtrack, too, is a collaboration. The 32-hour Spotify playlist was put together by Zonfrillo and long-time friend Jimmy Barnes. “There’s something in there for everyone. At least four or five times a night you’re going to go, ‘What a song’.”

Booze is curated by Orana wine director Kyle Poole; it broadly comprises Australian producers and celebrates some classics. “One of my favourite Australian wines is Astralis,” Zonfrillo says. “So we reached out to [South Australia’s] Clarendon Hills and told them we wanted to dedicate a page of the wine list to them, and they dug into the cellars and gave us some back vintages.”

Pairings are available in standard and premium, as well as an all-Australian option (“just to showcase what Australia can do.”). Teetotallers and juice fans can opt for the non-alcoholic pairing – a parade of native herb-infused elixirs, nectars and extractions.

Spirits are all Australian too, with the exception of a range of rare Scottish whiskies bought by Zonfrillo at an auction, including ghost (lost) distillery rarities and prized obscurities.

If it sounds like this is a deeply personal enterprise for Zonfrillo, it undoubtedly is.

Not only has the chef and his family relocated to Sydney for the duration, Jock’s wife Lauren will spend each night of the four weeks behind the venue’s new sliding door personally greeting each guest.

And while, for the moment, the orange-segmenting duties have been handed to another chef, Zonfrillo’s personal involvement in every part of the restaurant’s development is on display before diners even enter the venue.

“I ended up making the outside Orana sign myself. I got the kangaroo skins from some friends. Got some tradies to help put it together. I think it looks pretty fucking good.”

Orana in Residence will be at 85 Commonwealth Street, Surry Hills, from August 16 to September 22. Food is $350 plus wine and non-alcoholic beverages.