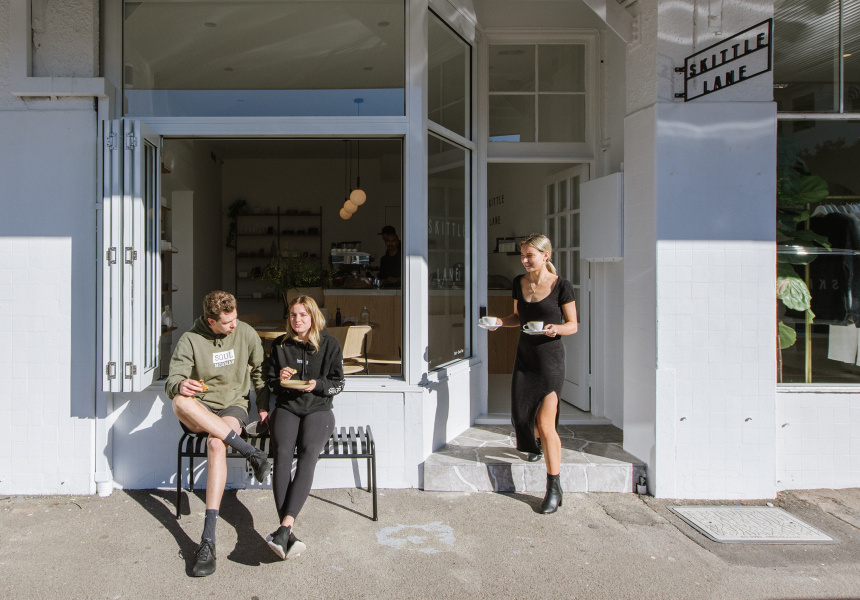 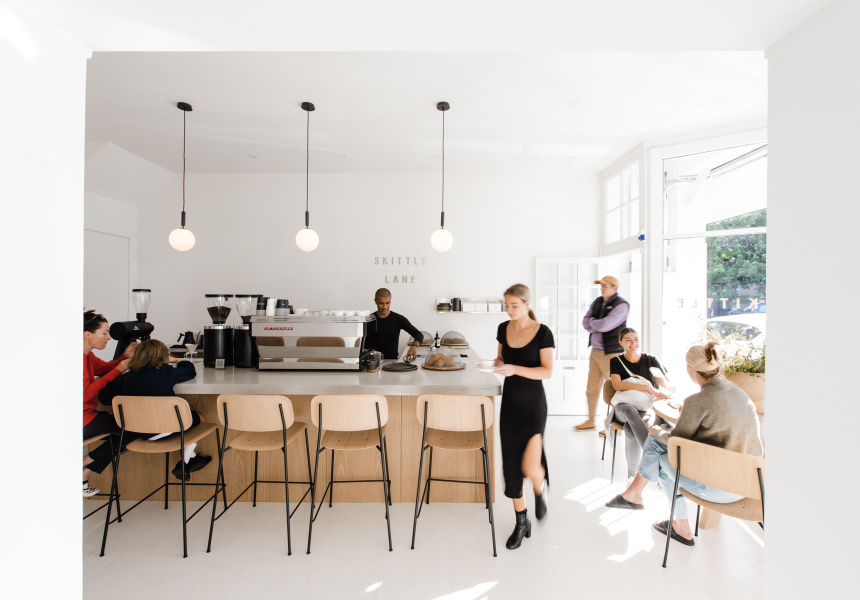 Skittle Lane’s new outpost doesn’t really feel all that new. It’s launched in a room off Assembly Label’s Manly store – and, looks-wise, it’s in step with Skittle Lane’s other minimalist cafes in the CBD and Bondi.

“We wanted people to walk in and go, ‘Of course Skittle Lane is here,’” co-owner Jodie Foster tells Broadsheet. The space features white floorboards, a custom concrete bench and floating timber shelves adorned with homewares that could double as works of art.

While it echoes the effortless style for which Skittle Lane has become known, it’s also very much in line with the simple luxury of Assembly Label. “It needed to be a space that really represented both brands, and something [the Assembly Label team] would be able to look across and be proud of.”

Foster admits she and her partner in life and business, Dean Wooding, never intended to open in Manly. In fact, they never wanted to. “We live in Manly, and we’ve always liked having to hop in the car to go to work, and then being able to come home,” says Foster. But this opportunity was too good to pass up.

Assembly Label first contacted Foster about collaborating on a home-brewing content series during lockdown. After discovering how well the two brands complemented one another, that collaboration evolved into partnering on a coffee bar in the clothing brand’s Manly store.

Situated in a row of heritage terraces on Pittwater Road, the shop is tucked away from the “tourist part of town”. With big windows and ample natural light, Foster said she decided on a darker paint to achieve the same feel as the city flagship.

“Whenever a space comes to me, it needs to reflect Skittle Lane in the city,” she says. “But nothing to me is cut copy. Plus, I want it to be a bit surprising. A lot of the time people make the effort to come and see us. It’s not always about convenience.”

Water is served in Ferm Living glassware, and Tuga pastries on Hasami Porcelain plates – those homewares are also available to buy in-store. Once you’ve finished one of Skittle Lane’s full-bodied seasonal blends, you can drift through to shop Assembly Lane’s collection of wardrobe staples. “Someone mentioned the other day that we’ve made the perfect place for boyfriends to sit and relax while you go shopping,” adds Foster.

Plans are also in place to open a fourth cafe in Circular Quay’s new Quay Quarter precinct later this year. Foster admits she doesn’t know where they’d be if they hadn’t opened their Bondi outpost just before New South Wales went into lockdown last year. “They keep saying ‘business as usual’, but it’s not business as usual. Our city store still isn’t back to what it should be, but it’s slowly getting there.”

That hasn’t quelled her excitement for the upcoming project, though.

“The site is a triangle, which is a nightmare for design – but I can’t wait for you to see it.” 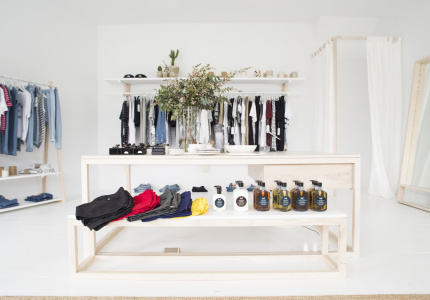