A greenhouse-like basement that changes from a cafe to a Thai-inspired cocktail bar at night. Calabur Cafe and Diner is the latest Sydney eatery distancing itself from traditional restaurant and cafe templates. Like The Nine, Two Chaps and (in the near future) Brickfields, Calabur is only a cafe by day. After five it transforms into something very different.

“When we saw this site, we thought, ‘This doesn't really suit a cafe, because there's no natural breeze, and it's hidden underground’,” says Calabur’s co-owner and designer, Thananon “Bank” Vatcharasuksilp. “But the site was so cool, we didn't want to let it go.” So they turned the bunker into a half-cafe and half-bar; izakaya-style but with Thai flavours.

Vatcharasuksilp, an interior designer who recently worked on Boon Cafe (as part of Archstallation), says he’s determined to separate the space’s two identities. At night time, candles replace the greenery, and a clever blackboard system shifts to simultaneously hide beans and brewing paraphernalia, and reveal the cocktail menu and spirits. In terms of food, the mornings feature classic cafe dishes, and the nights are more experimental. “Breakfast is more Western and then we add Asian ingredients into it. Once it heads into lunch, it becomes more fusion.”

The breakfast menu has eggs benedict with a wasabi hollandaise; garlic-infused avocado on toast with onsen eggs and a spicy tomato relish; and an egg pudding sprinkled with bacon bits and served with sourdough or steamed rice. “That was a dish Mum would make. It reminds me of childhood,” Vatcharasuksilp says of the egg pudding.

Vatcharasuksilp runs the cafe with three friends. He admits he isn’t a breakfast person, so Natee “Max” Laorungrueang is in charge of coffee (from Five Senses). Vatcharasuksilp runs a dinner menu full of drinking food and Asian-inspired cocktails. Despite a few unique flavours – such as the Thai-style namtok salmon with angel-hair pasta and roasted rice powder, or a zesty, wasabi-infused tuna tartar with fried rice-paper cups –the size of the kitchen dictates a relatively simple approach based on sous-vide followed by flame torching. Dishes are small, on average, and lighter on flavour, making them easy matches for Attpon “Benz” Punsiriporn’s Sakura with Yakult, plum wine and orange juice, or Baladin Wayan, an Italian craft Pale Ale. 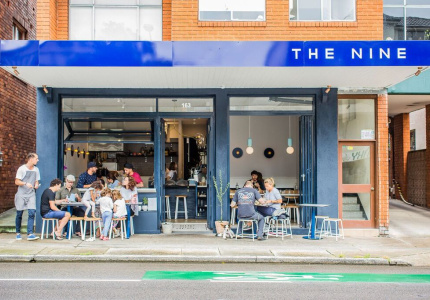