With low-intervention wines and snags from LP’s. 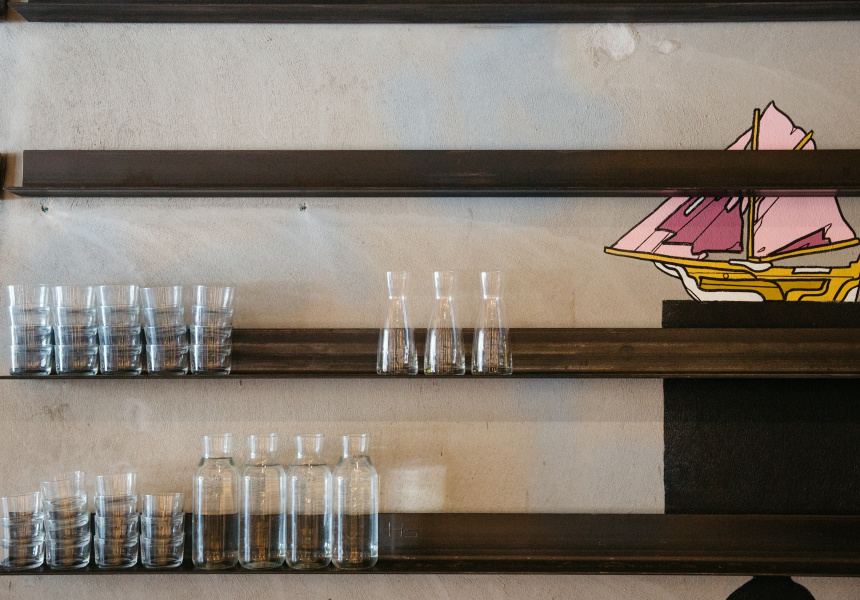 Since launching in 2013, the team behind Reuben Hills has left no stone unturned. They’ve got their noses wet in every aspect of the coffee trade from farm to cup. After launching some of Sydney’s most inspired breakfast menus, the team is poised to open a boutique hotel. And now, owner Russell Beard and his team are approaching a new frontier: dinner.

As of last week, the group’s eastern suburbs cafe, Bondi Hall, has been opening late for dinner. “The idea was to venture into a new aspect of the industry we haven’t explored yet,” says Beard . “We love the idea of being open all day and through the night and felt like the space really lends itself to quite a unique experience where you can come in for a coffee in the morning and a wine at night. It’s local, cosy and fun.”

The dinner menu is designed around snacks and share plates with wine decisively in mind. “We had a pretty clear vision for what we wanted the menu to look like and some dishes we thought would be fun to eat. We got some chef friends to help us out along the way,” says Beard.

A smoked-pork sausage from Chippendale’s LP’s comes with mustard and salmorejo (a tomato and bread puree), which is like gazpacho but thicker. Crinkle-cut potato chips are an obvious partner for a plate of pickled seafood doused in garlic, chilli and olive oil; and there’s pasta too: orecchiette is served with a chickpea sauce and green olives.

When it comes to wine, lo-fi is key. “We’ve really tried to focus on low- intervention wines and beers, we feel like it tells a really similar story to our coffee,” says Beard. The list is small and acts as a revolving door for the local and international producers the team is most excited by.

Bondi Hall is open for dinner Wednesday through Sunday ‘til late.