As core ingredients take the place of individual dishes on traditional a-la-carte lists, more of us are opting to go where the chefs choose for us. Throw caution to the wind – this is the “do as your told” of the restaurant world. We promise you’ll enjoy it. 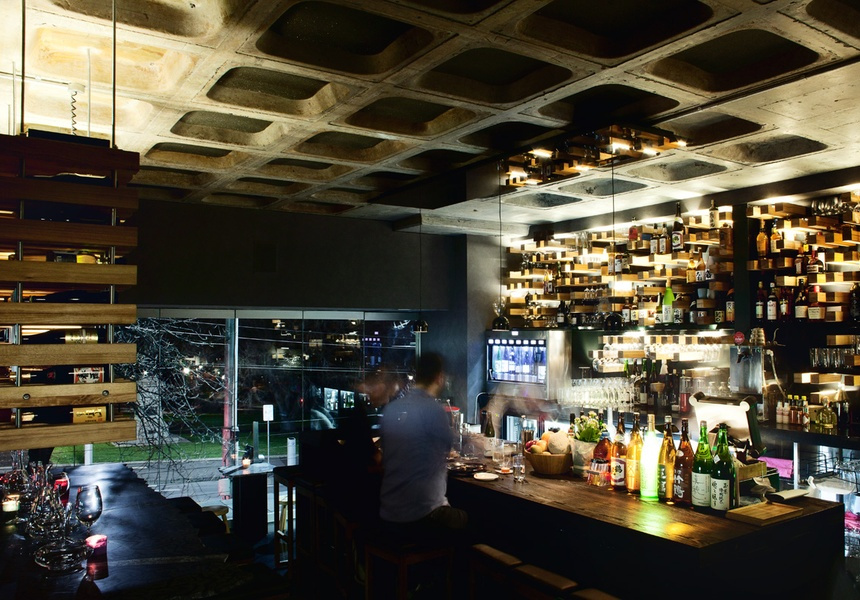 Ten years ago, Boston Globe journalist Brian McGrory wrote a column about the emergence of a new movement among high-end restaurants in his city. In Boston’s fine-dining establishments, he wrote, “Understanding menus requires multilingual reading skills, an unabridged dictionary, a Biology 101 textbook, and a pile of Fun With Phonics.”

No doubt McGory would be relieved to walk into Kappo, a new offering from Melbourne restaurateur Simon Denton, the man behind Izakaya Den and HiHou. At his new CBD restaurant, diners don’t choose their meal, just their preferred ingredients. Instead of dishes, Kappo offers a list of daily items, from sea urchin to Wagyu rump cap to cherry blossom leaf. Guests select the ingredients and alert the kitchen to any special dietary requirements. That’s where their control ends.

“What we do is a traditional style of dining in Japan. You don’t have a menu and you never have,” Denton explains. “In saying that, we couldn’t do it if people here weren’t ready for it. Maybe 10 years ago, we couldn’t do it.”

Denton is sure it’s something we will see more of. For the adventurous customer, being presented with only the freshest, most seasonal ingredients by a passionate, expert kitchen team can only be a good thing. For the operator and chef, these limited and non-menu offerings lower food costs (and make those costs more predictable) while reducing wastage, an issue that is increasingly important to the dining public.

Denton says the idea of turning up to a restaurant and having an unpredictable, spontaneous experience is one of the best parts of dining out. While he’s working hard to create it at Kappo, he fears the idea is disappearing across much of the hospitality industry due to a surprising obstacle: technology.

“People want to know everything before they walk in the door. They’re vetting restaurants against each other,” he says. “They get a menu and say, ‘Oh, I read this menu on the internet and it’s changed.’ In a sense, that is part of my thoughts with Kappo – to react against that – to force people into that element of surprise by going to a restaurant and not knowing what they’re going to get.”

In Sydney, Denton’s approach is echoed by Acme chef Mitch Orr, who recently told Broadsheet, “We want people to come in here with an open mind. If one dish gets written up over and over then we’ll probably take it off the menu.”

Back in Melbourne, another new Japanese restaurant in Richmond, Minamishima, illustrates this growing trend with no small amount of skill. There is no menu for sushi, which is chosen by the chef according to what is fresh and in season. Minamishima works to a traditional Japanese dining style called omakase – a phrase that means, “I’ll leave it to you”.

A typical dining experience in Japan, omakase’s most famous international export is perhaps Masa in New York. Manhattan’s cult Japanese restaurant has no menu, and Chef Masayoshi “Masa” Takayama prepares seasonal offerings which change each night. Sushi of Gari, another Manhattan institution, also offers an omakase option (as does Kappo).

Kappo and Minamishina speak to a growing movement that takes its cues from Japanese trailblazers, but menu-minimalism features in non-Japanese eateries too. The focus on seasonal, fresh produce continues to run at full speed around the globe. At Aizle in Edinburgh, Scotland, there’s no menu, only a blackboard listing the night’s ingredients. In Nashville, Tennessee, the Catbird Seat declares, “The details of what you’ll be savouring at your meal won’t be determined until you’re there; that part is up to us.”

This commitment to seasonal and artisanal food is one reason Australians will notice an increasing number of restaurants taking some control away from customers in order to serve the best possible produce. This is a movement that not only supports local farmers and producers; it offers diners surprising and unexpected food experiences as chefs are given a mandate to be adventurous in the kitchen. Not having to adhere to a static menu translates to a lot more spontaneity and freedom for the cook.

“I haven’t done an a-la-carte menu, since 1999,” says Ryan Squires, the owner and chef of much-lauded Brisbane restaurants Esquire and Esq.

Does this allow more innovation in the kitchen? “Absolutely,” he says. And in his opinion, it’s better for diners. “If I have 20 customers, I buy 20 sea urchins. At the end of the night, nothing is left in the fridge, so the next 20 who walk through the door paying top dollar are receiving top ingredients.”

Squires is conscious of providing surprising flavours and ingredients – that perhaps a customer wouldn’t usually order – while making sure he still caters for those who might be feeling less intrepid. “I try and give a balance,” he says.

Restaurants and bars with a-la-carte offerings also seem to be getting into the no-menu game. Peruvian eatery Pastuso includes the chef’s selection Feed Me Menu for a set-price in Melbourne’s CBD.

Alejandro Saravia introduced the Feed Me Menu to offer customers an overview of Peruvian cuisine, in the hope it will encourage them to be more daring when they return.

“It’s especially for a first dining experience,” says Saravia. “It’s an easier way for the customer to get an understanding of what Peruvan cuisine is. It’s basically what I would recommend to a friend.” Needless to say, the menu changes according to season and availability.

“Before we launched the Feed Me Menu we studied the local palate,” he says. “I will not put alpaca on the menu – it’s something people have to be aware of beforehand.”

The minimalist, or no-menu menu, is also appearing in other corners of the industry. At The Everleigh Bar in Melbourne, drinkers can opt for the classic Martini if they like it, but if they’re feeling impulsive, there’s bartender’s choice.

Constantly updating its cocktail menu with an eye on the classics, the Everleigh’s aim is to tailor drinks to its clientele’s individual tastes and desires. W hen encouraging guests to order according to bartender’s choice, bartenders ask what fresh fruits, flavours, spirits and style of drink a customer likes before selecting a suitable, much-loved or forgotten classic.

At a number of cocktail bars in the US and Europe, bartender’s choice is the only choice. This is the case at Attaboy in New York, which is co-owned by Melburnian Sam Ross. Attaboy has no menu at all – just a bartender at your service, who will personally tailor a pitch-perfect drink by asking a few simple questions. It’s no surprise that the man behind the Everleigh, Michael Madrusan, has done time behind the bar with Ross.

“There is a world of spirits out there [that] haven’t hit the mainstream, like Calvados, which is brandy made with apples, or piscos, which are really light and delicious and fragrant and work well in place of gin, tequila or vodka,” says Tim Phillips, co-owner of Sydney’s Bulletin Place, which also offers bartender’s choice. “It gives the bartender scope to make the customer what they think is good at the moment, what’s in season. It gives them free reign to give you something they might be really proud of.”

“I want to give customers something similar to what they like, but they might be trying something new,” Phillips adds. “It opens up a whole realm of possibilities.”

In so many areas of our lives, we trust the judgment of professionals. Clearly, it’s time we took the same approach when dining out.