An increasing number of restaurants are opting for smaller, more exclusive seating arrangements. Why share a table with 15 people when you can share the entire restaurant with just five? New York’s Momofuku Ko has 12 seats, as does Blanca in Brooklyn’s Bushwick neighbourhood. Nashville hotspot The Catbird Seat has 20 chairs around a single bar and in Berlin, cult cocktail bar Buck and Breck has only 14 seats.

Australia is also home to a growing number of small, intimate dining spaces, which offer diners one-off experiences– how often is your waiter also the head chef or bartender?

Some of these restaurants have been around a few years now. Anise in Brisbane’s New Farm has 17 stools and a couch, and Matt Bax’s Bar Americano, which opened in 2011, is licensed for only 10 lucky visitors.

More recently, Raita Noda in Sydney opened with a number of seats that perhaps sets the record for Australia’s smallest restaurant—it has a meager eight spots. John Mills Himself bar in Brisbane has 18 stools, and Bar Exuberante, Matt Bax’s latest offering, holds between 12 to 16 people.

“For me, it’s about trying our best to maintain our service and drink standards. I know exactly who served you a drink and we employ some of the best in the business,” Bax says. “We only have one bartender making drinks each night at both venues, and one bartender running service,” adding that it takes roughly one year of training on the floor before “any bartender gets near making drinks.”

“It’s probably frustrating for some kids but those that can stick it out have a level of expertise and experience that’s hard to find these days,” he says.

Kaita Abe’s Chaco Bar in Sydney seats only 25 people. He thinks it’s a little small, but says his space is a more authentic tribute to his Japanese heritage. “It was less about making money and more about wanting to express myself,” he says.

Mark Russo, of Sydney’s Italian restaurant Russo & Russo, jokes that media reports about the bistro claimed its name was, “bigger than the whole restaurant”.

“Small and intimate is more fun and more personal and that’s what luxury is,” Russo says. “Luxury is personalised and intimate, you can’t do that at a bigger scale.”

“Ultimately we will expand, but the point of expanding is to be able to maintain that intimacy, because that’s the point of difference,” Russo says. “When you’re big, it relies on systems. Being small lets you do one thing really well.”

“Meticulous and slow might not fit in this current world but since people are paying good money for my drinks I want them to be the best we can produce,” Matt Bax says. “Apart from my quality control OCD, I also adore small spaces.”

“I’m currently visiting friends in Kyoto,” he adds. “And I’m thinking maybe 10 is still too big.” 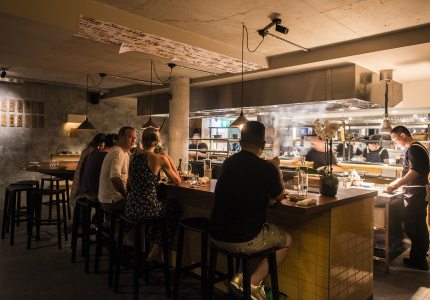