Two topnotch restaurants come together for one night only (and tom yum prawn dumplings are on the menu), an inner-city diner is doing $1 dumplings one night a week and gin-spiked seltzer hits Sydney shelves. East meets west
Surry Hills Levantine diner Nour will be transformed on March 3 when its sister diner, Parramatta’s Lilymu, takes over the pretty space. It won’t just be the food that’s different – Lilymu’s crockery and drinks will make their way to the inner-city as well. Chef Brendan Fong will serve a nine-course banquet ($118) with Chinese and Southeast Asian-leaning dishes such as snapper and coconut ceviche with white sweet potato and sea grapes; tom yum prawn dumplings; char siu-style Wagyu short rib; and a Thai tres leches cake. Cocktails – including a pandan Old Fashioned and a spiced Margarita – will be available at an extra cost. Plus, later in March the executive chefs at Lilymu and Nour will combine their skills for a mashup menu. noursydney.com

Dumplings for (Mon)days
Head to Chippendale diner Holy Duck every Monday from 5.30pm (until sold out) to score steamed or fried rainbow-coloured dumplings for just $1 each. The offer is available when you buy one main meal per person. holyduck.com.au

Say “adio” to summer
Woolloomooloo waterfront restaurant Molo is seeing out the last days of summer with a Greek pop-up that’s running until February 28. Molo is serving a full Greek menu – including grilled octopus and Thesauri caviar – plus a drinks list with drops from Greek breweries and wineries. There’ll even be a bouzouki player providing the tunes. molobar.com.au

Learn to cook a world’s worth of cuisines
Cooking school Victors Food is offering interactive classes – both in person and online – to help bolster your cooking skills. There are classes teaching dishes and cuisines from across the globe, including Mexican tamales, Malaysian hawker food, Indian street food and French bistro dishes. There are also classes for those new to cooking, as well as sessions to teach home-leavers the basic skills they’ll need to cook for themselves in their sharehouse. sydneycookingclasses.com.au

Just add gin
Towards the end of last year hard seltzer trend took off in a big way. And now Australia has a new addition to its boozy soda repertoire: gin-spiked hard seltzer. Launched by Avalon company Sunny Eddy, the tinnies come in lime and cucumber, pink apple, and blood orange and grapefruit flavours. Like their vodka and grain counterparts, these tinnies are low calorie, and sugar and gluten free. sunnyeddy.com.au 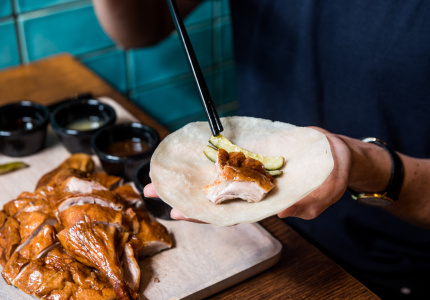