The Redfern favourite takes its top-secret tonkotsu eastward and adds a “noodle theatre”, plus new menu items including chicken-katsu curry and karaage chicken. 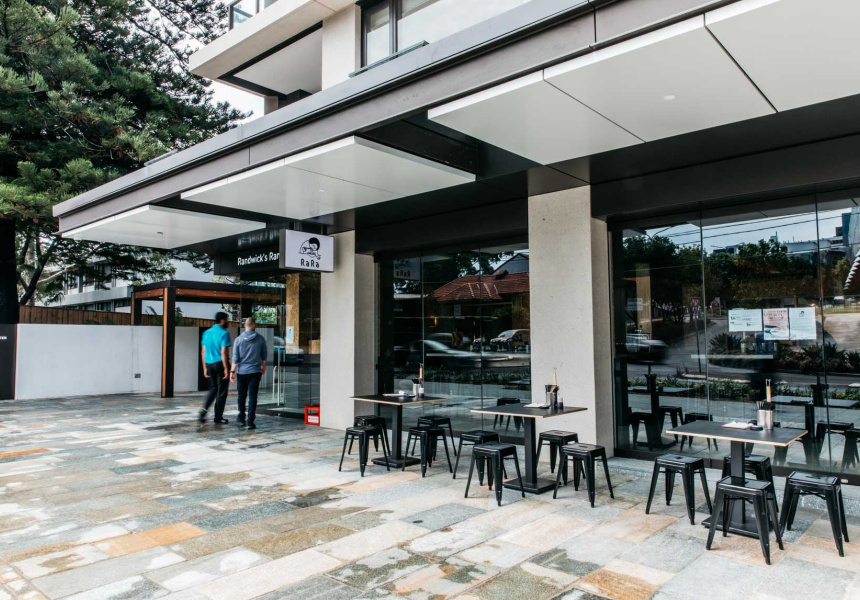 From a no-rules, hole-in-the-wall eatery to a combination noodles-and-motorcycle workshop, Sydneysiders love lining up for ramen. It could be thick, collagen laced gut-busters, meat-free soy-based broths and even punchy, burnt miso numbers – we love it. No surprise then that just a little over a year since opening to seemingly endless queues in Redfern, RaRa Ramen has added a second outpost.

This time last year, owners Katie Shortland and Scott Gault were juggling careers in television with the demands of opening a new restaurant. Today their focus is wholly on the ramen biz and their new shop at Randwick’s Newmarket precinct, not too far from Prince of Wales Hospital.

“Initially we were looking at a place on the main drag, but it didn’t work out. Fortunately, we were then approached by Newmarket and the location was perfect,” Gault tells Broadsheet. “We thought it was a good chance to build a space that’s central. Randwick is accessible to Coogee, Bondi, Maroubra and Kingsford. We see it as a gateway to the east,” he says.

Consistency was a key priority, so they’ve gone for a separate, off-site kitchen supplying the broth for both venues. “We took the pressure cooker [used for making the broth] off-site about three months ago. I’ve seen [what happens when] adding a second location with some shops, and the quality isn’t the same. We decided if we were going to do it, we had to centralise.” They’ve added to the Randwick outpost an on-site “noodle theatre” churning out noodles for both locations.

Made from a top-secret recipe passed down from a mysterious compendium of ramen masters in Japan, RaRa’s tonkotsu (made with a pork-bone broth) is the lynchpin of the operation. Served with free-range chashu pork, seasoned bamboo, creamy ajitsuke tamago (egg) and black fungus, it’s duly the star of any show. But Gault is excited about some of the new items on the Randwick menu.

“We’re trying to work with what the locals want,” says Gault. “Being close to the uni and the hospital, we’re tailoring the menu to have some quicker, healthier options.” For now, diners can expect a carbon copy of the Redfern offering, but dishes such as chicken-katsu curry, karaage chicken and a cold-noodle salad with house-made pickles and sous-vide chicken will debut in coming weeks.

The fit-out is Byron Bay-based Aphora Architecture’s first foray into retail, and the space is designed to capture an authentic Japanese ramen-ya. “We weren’t going for anything over the top,” says Gault. “It’s all about mood and lighting. Everything is black and the lighting is designed to guide your eye around the space.”

It’s a more spacious, group-friendly offering than its Redfern sister, but the low-set, black-tiled ceiling, warm textures and recessed lighting evoke the sultry intimacy you might expect to find in the backstreets of Sapporo or Fukuoka. A neon sign that reads “Big Noodle Energy” emits a warm glow from the noodle theatre.

What’s “big noodle energy”, you ask? It’s the swagger this joint has in spades.

This article first appeared on Broadsheet on February 4, 2020. Menu items may have changed since publication.