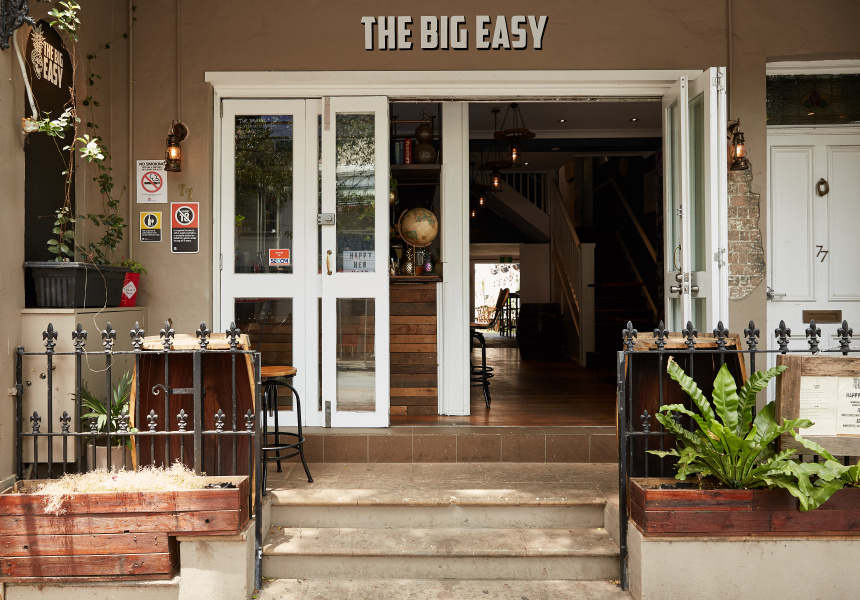 Over the past several years, 77 Stanley Street in Darlinghurst has been home to a number of bars. There was Johnny Fontane, then Rabbit Hole, and most recently Wood and Smoke Bar. Now, the space has been transformed into a New Orleans-inspired bar named after the city’s nickname, The Big Easy.

The brains behind the venture are Doug Laming (The Smoking Panda, Brix Distillers, Rabbit Hole) and his partner Merlin Kibe. They’ve tried to channel the vibrancy of the southern American city with old lanterns, a mix of soft pastel pinks and deep greens, and voodoo-esque murals by artists Natty B and Kentaro Yoshida. Take the stairs to the rooftop, where you’ll find a summery beer garden under festooned fairy lights – and a cool view of the surrounding inner-city buildings.

“I didn’t want it to be just Bourbon Street, Mardi Gras or French Quarter, or another Papa Gede’s [a bar in the CBD] and go full voodoo … I like to think we’ve taken the fun aspects from each of those things and put it in this giant mashed-up space,” Laming tells Broadsheet.

As the name suggests, the venue doesn’t take itself too seriously. “It’s a bit fun, it’s a bit jovial, it’s a bit tongue-in-cheek,” he says.

And the drinks are also supposed to be easy drinking. Basic Bitch is the bar’s take on a lychee Martini, while A Bit Contentious is a riff on one of the southern state’s greatest inventions: the Mint Julep. Here it’s got a real chocolate bent, made with Buffalo Trace bourbon, chocolate bitters, Branca Menta, mint and a chocolate-stout syrup.

There’s also a fridge stocked full of American beer from brewers such as Portland-based Deschutes and California’s Stone Brewery. Beers on tap include an IPA from Lagunitas (which This American Life listeners will recognise from their sponsorship ads) and the classic PBR (Pabst Blue Ribbon).

Laming has tried to have a bit of fun with the wine list, using descriptions such as “sausage rolls” in the tasting notes. “When you go to places with tasting notes … it’s always so formal and there’s nothing fun,” he says. “Everything about the bar needs to be fun.”

Food wise, it wouldn’t be a Nola-inspired bar without a menu with Cajun and Creole influences, so there’s blackened Atlantic cod with creole rub; jambalaya (meat and vegetables mixed with rice) packed with Andouille sausage and shrimp; seared skirt steak with creole rub and mustard greens; and house-made beef jerky.

Each Sunday, The Big Easy hosts intimate Sessions in the Sun with live performances. Otherwise, expect classic ’90s rock that you’ll want to sing along to.

This article first appeared on Broadsheet on January 9, 2020. Menu items may have changed since publication.