Who’d have thought Sydney could be a haven for so many beehives? We chat to an urban beekeeper to find out how both backyard and rooftop bees in the city can work. 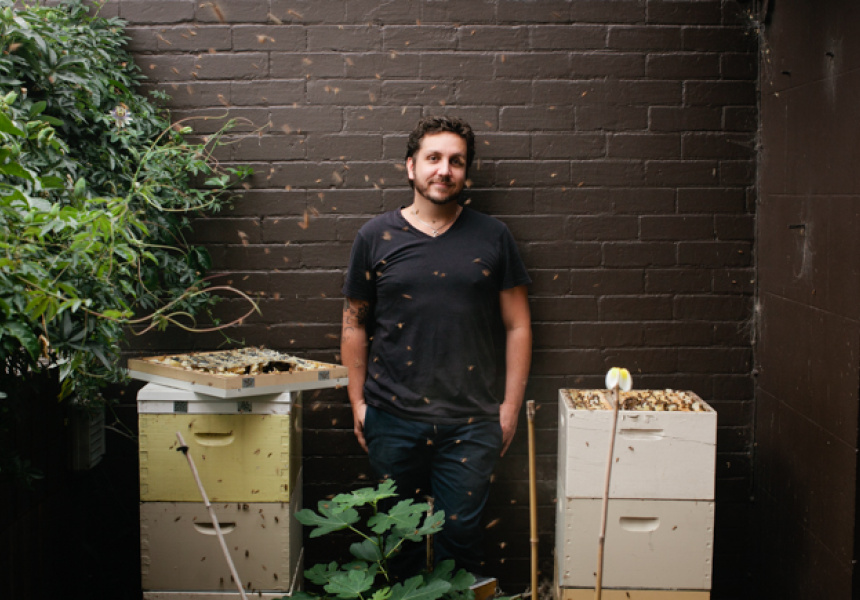 “When I got into it I didn't realise just how into it I would get, but they're incredible,” says Doug Purdie, speaking of his bees. “Their whole social structure and how they go about things is fascinating.”

Purdie is an apiarist and one half of The Urban Beehive. He might be better described as a freelance beekeeper. Along with his co-keeper, Vicky Brown, he installs and maintains beehives in gardens and rooftops right across Sydney. It’s certainly an unusual venture. When is the last time you even saw someone in a bee suit?

It’s clear that urban beekeeping is part of the unerring food philosophies of sustainability and localism, but it’s also movement that integrates into city infrastructure and rhythms with relative ease. Hives happen to be compact enough to slide into small spaces, making them perfect for urban terrains: “A bee-hive is about the size of a filing cabinet. So you just need a flat area that's got a bit of shade and a bit of winter sun and that's it,” explains Purdie. That’s part of the reason why their hives are located in so many community gardens across the city, as well as the Swissotel (CBD), Cornersmith, Wine Library, Buzo, Petty Cash Café and Chez Dee.

The appeal? Urban beehives are a way to foster your own produce, with fewer resources than, say, owning some chooks. Having your own backyard is optional. “The bees just fly off and find what they need... You don't even need to have a garden.” It’s a perfect allegory for the objectives of the sustainable food ethos – complete integration, locally dependent and no interference necessary.

Because honey is so entwined to the local geography and fauna of a hive, it is probably one of the most discernable relationships you could ever make between locality and flavour. “In an urban environment like this there are many, many flavours and it can change from week to week. It's all different – it's all whatever happens to be flowering at the time.”

The notion of being able to taste the flora of some of Sydney’s suburbs – distilled into honey – is strange only because you don’t think of places like Marrickville or Bondi as being terroirs or locations with autographic flavours. It evokes a certain curiosity though (what does Bondi taste like exactly?).

The flavours do seem more vivid than your run-of-the-mill honey. Much of it is due to the minimal treatment required to get urban honey into a pot. “The flavour and texture of honey are pollen and little bits in the honey. When you heat-treat it [like commercial honeys] you're taking the flavour away from it, so this tastes completely different to what you’d buy at the shops.”

If you happen to neighbour one of these hives, there’s little reason to fret. “The bees are off doing their own thing; they're not interested in attacking people,” Purdie assures. “The only time you really get stung is if you go and stand on a bee or poke a beehive with a stick. Other than that, the bees are going to leave you alone.” Which is plenty of incentive not to go poking around after bees.

Purdie himself is nonplussed about being stung, but admits that it’s just part of the job. “The picture of the bee guy wearing the white suit? They're really hot and uncomfortable, so you don't always wear them,” he says matter-of-factly. “Generally we'll have something [to protect] our faces and that'll be it. The bees aren’t aggressive, but it just happens you're dealing with a beehive.”

With their strong sense of structure and ‘hive mind’ – an apiarist learns to read the bees’ mood – the bees’ collective buzz is an indicator of disruptions. “You learn more about bees’ social structures the more you work with them. It's amazing. You can walk up to a hive and just by the sound you know a certain extent of what's going on.”

When described as something of a bee-whisperer, Purdie laughs. “But it's true,” he admits. “With experience you get to learn the sounds and smells and what the bees look like when they're flying [in formation].

“You can learn a lot about what's going on inside just by looking and listening. They're amazing things. They really are.”

Urban Beehive’s honeys and beeswax candles can be found at Sydney Sustainable Markets at Taylor Square every Saturday, 8am–1pm.