An ambitious underground restaurant you could lose hours in, a gnocchi pasta bar and a tiny ramen eatery – these are the places we’re loving. 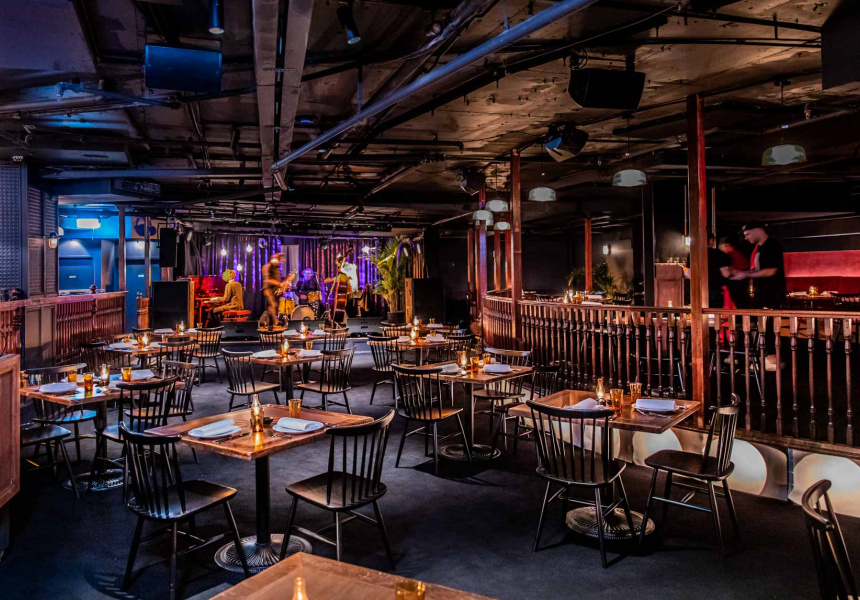 While it’s been a windfall for Sydney bar aficionados this past six months, the city’s restaurant game hasn’t been as strong. These, though, have captured our attention and filled our bellies with delicious and well-executed food. One got us up dancing, another made us flout etiquette and lick the plate and a third was a return to form by an old favourite.

Mary’s Underground
Only the Mary’s group could open a restaurant with a menu that has lobster, flaming bombe Alaska, caviar and raw clams with fermented chilli and make it feel like a party. This ambitious CBD restaurant has all the cues and price tags of a fancy restaurant, but no one treats it like one. The wait staff tells jokes and encourages you to dance, a shoeless live band wanders from the stage to play between tables, and the stereo pumps out hip-hop.

There’s not another place in Sydney like it – this is a real dinner-and-a-show kind of place. And while the previous tenant, live-music venue The Basement, was all about what was on stage, here it’s a bit of that (bands play three sets per night inclusive of your dinner bill) plus the fairly fancy food and booze.

There’s some excitement to be found on a wine list that swings from offbeat naturals to easy-drinking chablis. The king of the menu is the whole rotisserie duck with persimmon sauce.

Peppe’s
The menu gets posted on the restaurant’s chalkboard each day and it features a hit list of pastas. The house specialty is gnocchi and there are three different options available as well as a special, which could be, say, spaghetti with chilli and pangrattato (breadcrumbs) or fusilli with zucchini and peas.

What you won’t ever find on the board is meat –¬ this Bondi Road restaurant is vegan only. We’re telling you that for no reason other than it’s interesting to know, and it shouldn’t be what defines Peppe’s because this vibe-y eatery is delicious, fun and just happens to have a plant-based menu.

Not that you even notice. The white bianchi (white sauce), for example, is a dish of dimensions and tastes like it’s got lots of butter and cheese in it. It’s made using a rich, creamy porcini and cauliflower sauce cooked down for three hours into a reduction and then garlic, onion and crisp sage is added. “All the good stuff,” says Grace Watson, who with Joe Pagliaro runs Peppe’s and Waterloo’s Paperbark.

Wines are all natural and made with minimal intervention. And the breads are an unexpected highlight too; the slabs of house-made focaccia are fluffy and full of flavour, and the garlic bread is made on Iggy’s and topped with fennel, garlic and olive oil.

Ichibandori
What would make you pay more than $25 for ramen? A bowl topped with grilled 7+ Wagyu? A broth made from tuna bones and served with premium tuna belly? What if it were made by Tomoyuki Matsuya, who built his reputation at HaNa Ju-Rin and is regarded as one of Sydney’s best ramen chefs?

The idea at Ichibandori is to show Sydney that ramen isn’t just a cheap dish, but one that can be made with premium produce and creativity. While many other places are about the thickest, most treacherously porky tonkotsu broth, this is more about refinement and doing only a couple things, but doing them well. Each night Matsuya and his team only post two recipes: a signature chicken-and-pork-hybrid soup and a special. Matsuya also applies his flair to a superb robata (charcoal grill) menu, where you’ll find his flair applied to cod neck, beef tongue, salmon fin and king mushrooms.

This is a tiny place, only about 20 seats, and the interior is dark and there’s not really a main entrance. That part is confusing. Here’s a good tip if you want to visit: don’t try and climb over the tables to get in, the entrance is at the back.

Chuuka
Two respected chefs. Two cuisines. One restaurant. It sounds like the premise of some whacked-out reality-TV show, but it’s actually Chuuka, the new diner from Sokyo’s Chase Kojima and Melbourne’s Victor Liong (Lee Ho Fook). Chuuka – which is named after Chinese food introduced to Japan in the 19th and 20th centuries and adapted for Japanese tastes – is The Star’s first venue outside of the casino.

The food is a mash-up of what the two chefs individually specialise in: Kojima’s background is Japanese and Liong’s Chinese. The results are lighter, Japanese-tinged versions of Chinese dishes, including tempura-battered chicken coated in sweet-and-sour yuzu sauce, blue swimmer crab and scallop fried rice with Japanese XO sauce, and Japanese steamed-egg custard with foie gras. It’s all served in a handsome dark-timbered, double-decker space on the water in Pyrmont. For those who don’t fancy a sit-down meal there’s a snack menu at the bar, and the cocktail list has been guided by the five Chinese elements: wood, fire, earth, metal and water. Think barrel-aged hickory-smoked shiso umeshu (perilla liqueur), bullet rye and Campari.

Kitchen by Mike
When Mike McEnearney announced he’d be closing his CBD fine diner No. 1 Bent Street in April and replacing it with a new concept, the Broadsheet office crossed its fingers he’d come back with a new iteration of his Kitchen By Mike canteen concept. Thankfully, he did, with a new focus on sustainability, locally sourced ingredients and waste minimisation.

McEnearney’s back behind the counter, scooping salads into containers and dishing out bacon butties by day, and roasting meats by night. Like the original Kitchen By Mike in Rosebery and No.1 Bent Street after it, everything served is seasonal, meaning the menu is ever-evolving. Unlike the original Kitchen By Mike there’s an evening service, which is more restaurant than canteen.

Though the menu is dynamic, you’re likely to find McEnearney’s much-loved sourdough pancakes with lemon curd for breakfast, hearty salads for lunch and roasted meats and seasonal vegetables at dinner. Two constants are McEnearney’s ever-excellent sourdough (served with Pepe Saya butter) and an all-Australian drinks list. There’s nothing fancy or stuffy about McEnearney’s food – but he succeeds in showing just how good simple dishes made with top-shelf ingredients can be.

Honourable mentions
We were pleasantly surprised by the two restaurants that opened last month on the previously unoccupied rooftop space of Westfield in the CBD: contemporary Cantonese restaurant Duck and Rice and its Middle Eastern-inspired sister eatery Babylon.

And while we get people might hate the idea of dining in a shopping centre, you get no sense of being in one at all. You don’t even feel like you’re dining in a huge restaurant – Duck and Rice can accommodate 500 and Babylon can fit 800 – because it’s been designed to provide intimate spaces. The design is luxe and intricate, and it’s rare to find such a large outdoor space you can eat and drink at in the centre of the city. We especially like Duck and Rice’s dim sum by Qing Hua Pi (she learnt her craft at Tim Ho Wan and was principal dim sum chef at Golden Century). 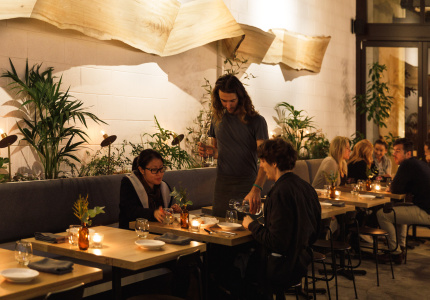 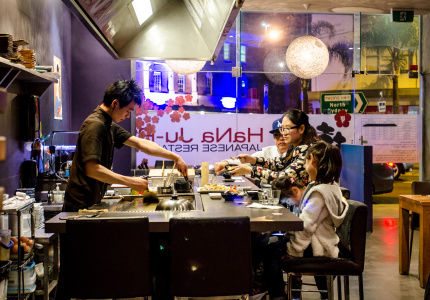