The Best Pizza in Sydney, According to Naples

There are only four restaurants in Sydney with AVPN accreditation. We explain what it is and how you get it. There are two main religions in Naples, Catholicism and pizza. One is administered by the Vatican, and the other, by the Associazione Verace Pizza Napoletana (AVPN). The AVPN was created to preserve the history and authenticity of Neapolitan pizza. Although the exact origin of pizza is pretty hazy (depends when you stop calling it bread and start calling it pizza), the first appearance in its modern form happened in Naples. There were primordial pizzas made with just lard, herbs and garlic but the first recognisable variety was the marinara, a simple combination of fresh crushed tomatoes, oregano and garlic that was popular among mariners who would fold pieces and take them to sea.

The next development, which exists somewhere between myth and history, is the story of Queen Margherita of Savoy who, when visiting Naples, was served a “Pizza Margherita” by famous pizzaiolo Raffaele Esposito. It had only three ingredients with each one representing a colour of the Italian flag, mozzarella, basil and tomato.

The AVPN’s aim is to preserve the traditional preparation of both the original Neapolitan pizza styles. For a pizzeria to get AVPN accreditation it needs to prove the quality and authenticity of every detail of its production process. This includes its oven, pizza dough ingredients, fermentation and preparation, the exact proportions of the base, the toppings, how the toppings are applied, time spent in the oven and even how the pizzaiolo uses his hands to work the dough. The finished product should have a soft base, soggy with the freshness of its ingredients. The edge should be puffed and chewy and the dough should be bready and full of flavour. The passion and effort required to conform to the AVPN’s rules means very few pizza restaurants ever attain the accreditation. Here’s who’s made the cut in Sydney.

Gigi
Gigi was the second pizzeria in Sydney to receive the prestigious accreditation, after the recently closed Pizza Mario. Owner and chief pizzaiolo Marco Matino’s family used to run a restaurant in Naples. He first started learning the intricacies of pizza making while working in Boca, one of Sydney’s first Neapolitan restaurants. He says one of the less-recognised difficulties with producing Neapolitan pizza is the variance in the oven. Although the AVPN has a very detailed and complicated procedure to follow, every element hinges on a pizzaiolo’s knowledge of their oven. It’s imperative to know how to heat it, how to maintain the temperature and most crucially, where the heat is coming from – the oven’s base, the air or the fire. It will affect the shape and taste of the dough.

Lucio Pizzeria
Lucio de Falco admitted to us he’s considering building a banner outside his restaurant saying, “no chicken or barbeque sauce on these pizzas”. He’ll never do it because he doesn’t want to offend anyone, but he wishes Lucio customers would stop asking. De Falco’s dedicated most of his life to perfecting Neapolitan pizza, and he wants people to appreciate and love pizza how it’s supposed to be. De Falco’s new Zetland restaurant will also be applying for accreditation soon.

Aperitivo
Few people talk as passionately about pizza as Francesco Spataro. The Aperitivo pizzaiolo says he first discovered Neapolitan pizza in a restaurant near his hometown in Catania. Every day there was a queue out the door and inside there was always an old man painstakingly making all the pizzas himself with his nephew there to help him lift the tray. When he tried it, Spataro understood that every ounce of the old man’s experience was poured into making that pizza perfect. Now he’s got an intricate scientific understanding of dough and a lifetime passion. He says Neapolitan pizza is a perfectly balanced dish, changing it would be like painting new strokes over a Caravaggio, it would simply ruin it.

Queen Margherita of Savoy
Lee Carroll’s restaurant was awarded with pizza’s highest honour on May 13, the restaurant’s first birthday. Carroll says opening Queen Margherita of Savoy relieved an urge he’d had since he first went to Pizza Mario’s. It was a seminal meal that led him to close the restaurants he owned, pack up everything and move to Naples to learn how to make pizza. Now he spends almost every day working on what he says is an imperfectible beast, pizza dough. 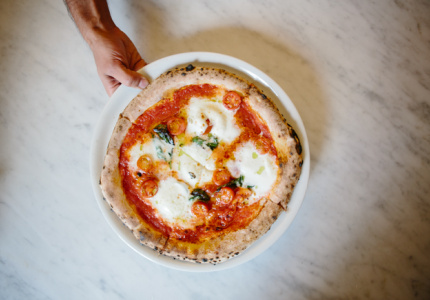