A Bao for Every Hour

Pillowy, soft buns filled with everything from tempura prawn to sticky braised pork belly. This is the year of the bao. If the taco and the pork bun had a child, it would be a bao. A Taiwanese staple snack made popular by Momofuku chef David Chang (though his pork bun is sadly not on the menu at Momofuku Seiobo anymore), a bao is a soft and light steamed milk bun, folded over into a taco shape and stuffed with a variety of fillings. Restaurants around Sydney have not hesitated to put their own stamp on the bao, which has resulted in a lot of different combinations, from braised pork to fried chicken.

Mr Bao
Venture to York Street’s George Arcade for traditional bao buns filled with less-traditional fillings by Mr Bao. Perhaps the most creative filling on offer is crackling pork belly, succulent roast pork, Mr Bao hoisin and home-pickled cucumbers. If pork isn’t your thing, tempura prawn and wasabi, or even karaage chicken with spicy aioli, might be. The restaurant and bar was originally a small market stall, but demand grew for a permanent outpost. Owners James Pham and Angeline Lee plan to extend their current opening hours to a breakfast service that will include hangover-oriented bacon-and-egg bao. Good morning indeed.

Bao Dao Taiwanese Kitchen
Just about everything at this tiny Chatswood hangout is under $10. How’s a soft bun filled with a strip of sweet and sticky braised pork, pickled chilli, fresh coriander and crushed peanuts for $4.90 sound? The restaurant is dedicated to bringing authentic Taiwanese food and snacking culture to the Sydney mainstream. Each of the bao are made to order with the freshest produce.

Bao Stop
Bao Stop has been built from a shipping container and serves bao at many Sydney food events. It will return to Sydney’s Night Noodle Markets later this year and sling its trademark Gau Bao – a staple in China and Taiwan. Its Gua Bao has the fluffy, steamed consistency of a pork bun and is stuffed with one of four fillings: pork belly, fried chicken, fried Peking duck and fried tofu. The shipping container has booked a three-month stint in a car park in Drummoyne and will appear at various events in Sydney in the near future. Watch its Facebook page for details.

Belly Bao
The website for this canteen declares: “Street food, but not as grandma remembers”. Essentially, it’s a traditional bao with a modern stuffing. Belly Bao is inside Goodgod Small Club and serves a selection of six different baos, plus gluten-free and vegan options. The canteen caters to the desires of Goodgod’s dance-floor patrons, so snap up a soft-shell crab or a slow-braised beef short rib bao to start off a night, or to accompany you on your way home. If you are more of a sweet tooth, why not try a dessert bao? There is Baonana Split or strawberry to choose from. 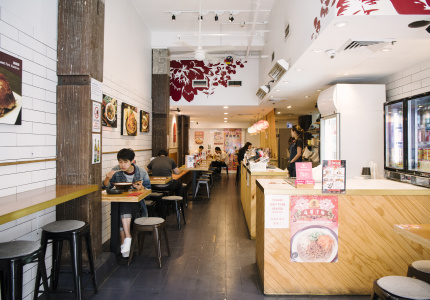