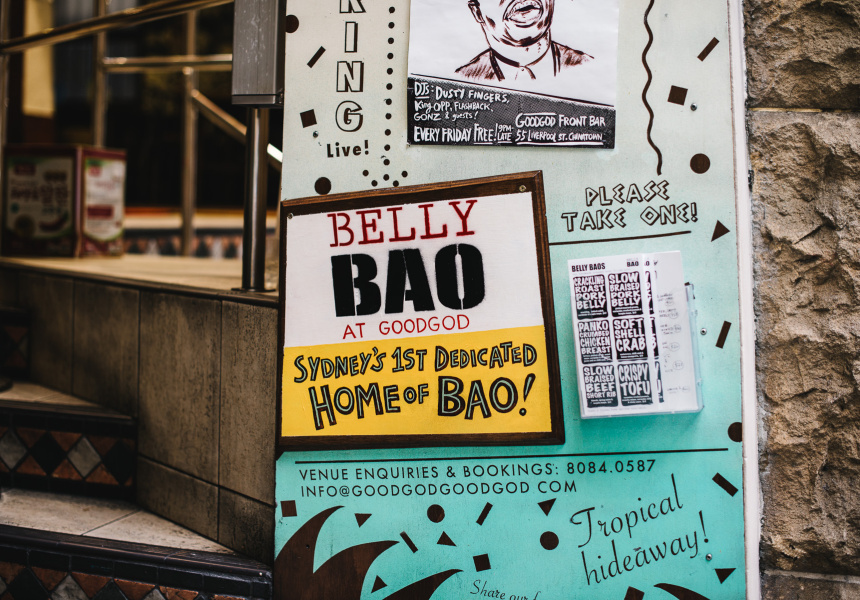 Head chef Sylvia Tran discovered the tasty Taiwanese treat a few years ago while travelling in America. “We had these baos in New York and we just thought they were amazing,” Tran says. “After I’d eaten one, I never forgot about it.”

Distress hit when Tran returned to Sydney to find she was living in a bao black spot. “They were impossible to find – there was nowhere that sold them.

“I just kept thinking about how I really wanted to eat it,” Tran says with a laugh. “And so I thought, why don’t I give it a go and see how it turns out?”

In Taiwan the traditional gao bao consists of a soft, steamed, taco-shaped bun filled with slow-braised pork belly, pickled mustard greens, crushed peanuts and coriander. You can snack on this classic between beers, along with several other signature baos.

The permanent kitchen is a first for Belly Bao, with the menu evolving to cater to Goodgod’s party revellers. “I’ve experimented with a few flavours during the year, but I didn’t want to release them until I’d found the right spot,” Tran says. These new additions include a soft-shell-crab bao with watercress, chilli aioli and lemon vinaigrette; sweet potato fries; and Belly Bao Chicken (BBC) served crunchy, sticky or spicy.

If you’re worried about how eating might impair your dancing, do not fear. Tran says, “Our food is a real snack kind of food. It’s small, so you can hold it in one hand – it’s really on the go.”