Where plump, golden crisp-skin birds are prized and authenticity is king. Ask the director of Quanjude if he’s concerned its first Sydney restaurant has opened on a site where three now-closed Peking duck-focused restaurants once sat, and Bin Yang blankly says no. “The Quanjude brand is so popular, it doesn’t matter,” he says. He might be right: Quanjude is massive in China.

The story goes the first Quanjude opened in 1864 when a restaurateur convinced an ex-Imperial chef to come out of retirement to serve the aristocratic duck recipes to the people. Fast-forward to today and there are now more than 50 of the restaurants in China and other outlets in Taiwan, Canada and Australia (there’s one in Melbourne, too). And throughout all this it’s maintained the kind of reputation for quality few chains here can even get close to.

Whether that’s enough to keep the new place afloat who knows, but its long history is not the only thing that differentiates the newly arrived Chinese chain from its failed predecessors. China Republic, Plump Duck and Tang Hui had two things in common: a dark and serious fit-out, and a modernised menu that mixed Peking duck recipes with high-end booze offerings and Australian-Chinese fusion. Quanjude does neither of those things.

The blackened windows have been stripped away to let natural light in, and dark furniture has been replaced with light timbers. There’s also an open kitchen so you can see the Peking duck prep, and a central 360-degree bar.

In the kitchen it’s all about authenticity. The Quanjude brand is based on cooking traditional Peking duck and the recipe and the ritual of making it has been preserved. The ducks have air pumped into the cavity between the meat and skin (a crucial process to achieve maximum crispness), they’re then brined, hung, glazed and roasted. The skin is served first and comes with sugar, which you use to dip in, and then comes the classic pancake combo (hoisin, spring onions and cucumber) and the remaining meat.

The rest of the menu is filled with other famous Beijing recipes – beggar’s chicken (an entire chicken cooked inside a hermetically sealed wrapping of lotus leaves and salt), fried meatballs, roast mutton and stewed pig’s organs.

While you're flipping through the menu, take a minute to read the restaurant history on the opening page, it’s pretty hard to decipher – in Mandarin or English. 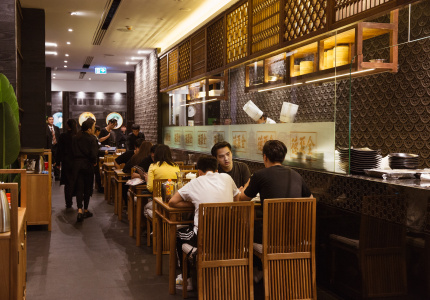