Produced by Broadsheet in partnership
with The Star

Behind (and Inside) the Bento Box

The modern bento box has a long history. In partnership with The Star, Chase Kojima, chef at Sokyo, tells us why it’s the way it is, and the rules for making your own. 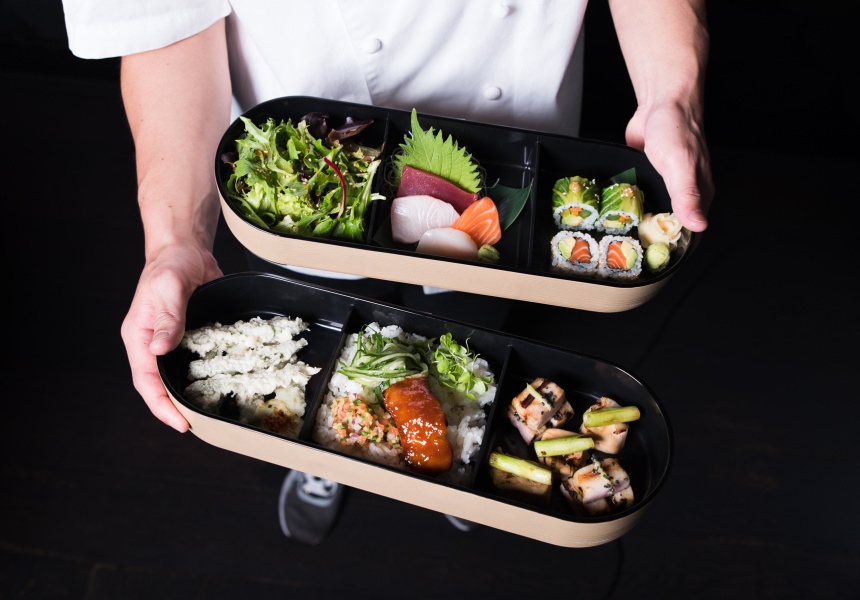 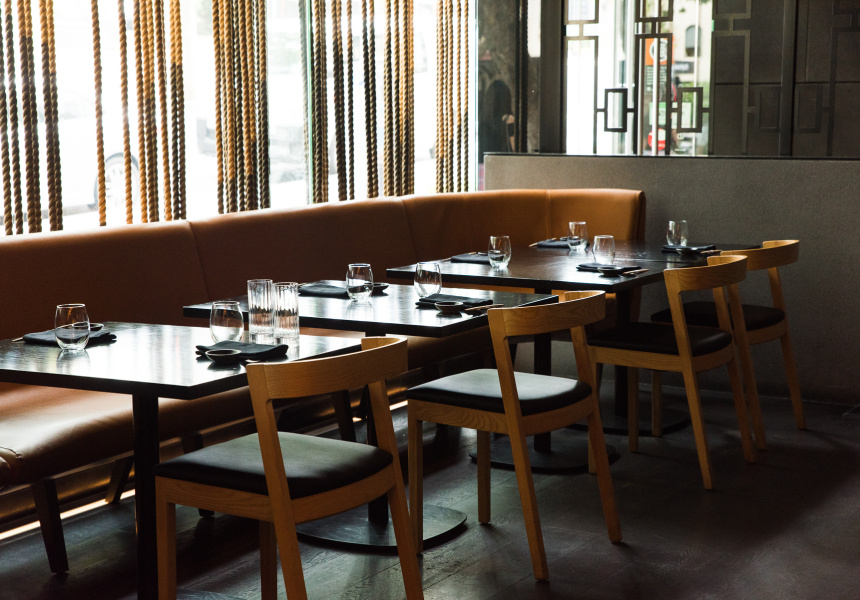 The bento box’s history begins more than 1000 years ago. Wives of outdoor workers – labourers, warriors, fisherman – would send them off for the day with food packed in a bamboo box. One of the oldest types of bento dates from the early 16th century: maso no sushi, a speciality of the Toyama Prefecture, is a simple cake-like dish with pressed trout sushi and rice wrapped in bamboo leaves and eaten in slices.

In modern Japan, bento is eaten by everyone from pre-schoolers to professionals to retirees. According to Chase Kojima, chef at Japanese restaurant Sokyo at The Star (as well as executive chef at Kiyomi, Gold Coast), it’s the ultimate on-the-go meal. “It’s a power lunch,” he says. Kojima grew up in San Francisco and worked as a chef in the United States, Dubai, London, Japan and the Bahamas before he arrived in Australia in 2010 to open Sokyo.

The providence of the bento was on Kojima’s mind recently when he was adding a bento box to the Friday and Saturday lunch menu at Sokyo. He settled on an array of the restaurant’s signature dishes to fill the beautiful lacquered boxes’ six compartments: four types of sashimi; pickled-vegetable rolls; house salad with a spicy garlic dressing; snapper tempura; miso-marinated glacier 51 toothfish; and chicken teriyaki or pork with wasabi apple sauce. “You get the whole Sokyo experience in one go,” says Kojima. 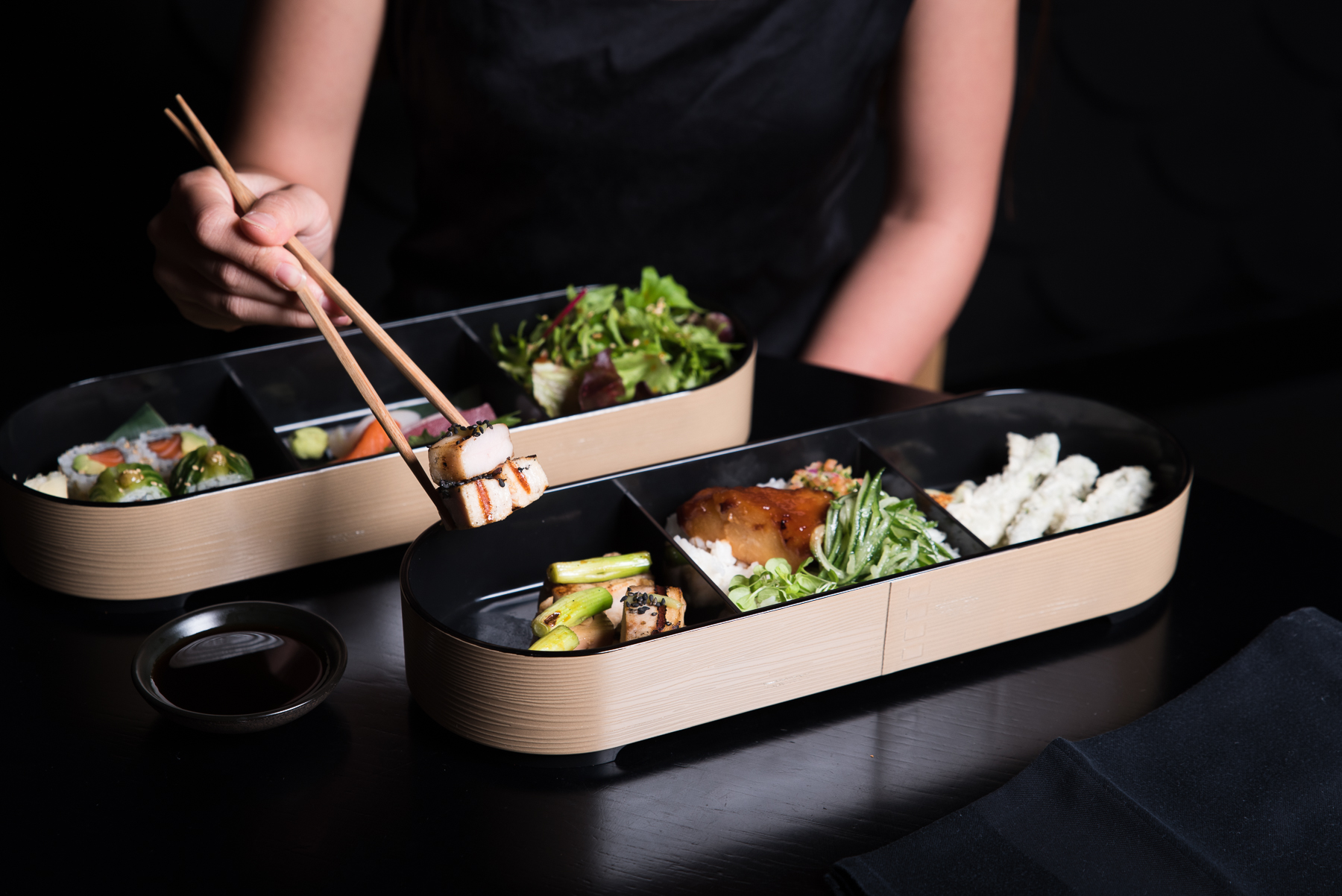 Types of bento (including “revenge bento”)
Bento fell out of favour in the mid-20th century but experienced a resurgence in the 1980s. Today there’s a bento box for every age and occasion.

Basic bento boxes might contain rice, korokke (deep-fried fish), and shumai (dumplings). At the other end of the spectrum, kyaraben (character bento) and oekakiben (picture bento) resemble elaborate works of art, painstakingly put together by mothers to please small children who are greeted by anime and manga characters; animals; and smiling faces when they open their lunchboxes.

And then there’s the aisai bento, or “the lunchbox from a beloved wife”,  and its offshoot, the shikaeshi bento, or revenge lunch, which might be packed with uncooked rice, a raw egg or fashioned into an embarrassing design.

Bento on the go in Japan
One of the best things about train travel in Japan – and there are many – is ekiben, bento boxes sold on trains and at train stations on long-distance lines. Thousands of varieties exist and many showcase regional cuisine. At Tokyo Station, bento vendor Ekibenya Matsuri (“festival of bentos”) has a range of 170 bentos from all over the country. Among them is the Shinkansen bento box: seafood onigiri, pickled daikon radish, shrimp fritters, fried chicken, and cake inside a kitsch replica of the famous bullet train.

Make-your-own bento
When making your own bento at home, Kojima says to begin with, “you want to have things that have been cooked and won’t go off. Traditionally, we’d never put raw [protein] in there.”

First, you’ll need a container. If you don’t have a purpose-made bento box, use silicon baking cups to divide food or create edible compartments from lettuce leaves. Try to keep wet and dry elements separate; use sauce containers to minimise leakage.

When it comes to ingredients, a good ratio to follow is four parts carbohydrates, two parts protein, one part each of vegetable and fruit. Traditional bento ingredients include rice or noodles; fish, usually mackerel, salmon or unagi; meat, such as gyudon (a beef stew); agemeno, deep-fried dishes such as chicken karaage or tempura; tamagoyaki, a rolled omelette; and pickled or cooked vegetables.

A bento box should be packed tightly and be pleasing to the eye; add colourful fruit and veg to create visual impact. Beyond that – and as long as your food has been cooked – it’s anything goes. “There are no rules,” says Kojima. “You can put in anything you want.”

This article is produced by Broadsheet in partnership with The Star. Kojima’s bento box is available on the Friday and Saturday lunch menu at Sokyo.

Produced by Broadsheet in partnership
with The Star
Learn more about partner content on Broadsheet.