You’ll have to be quick to get your hands on it though. 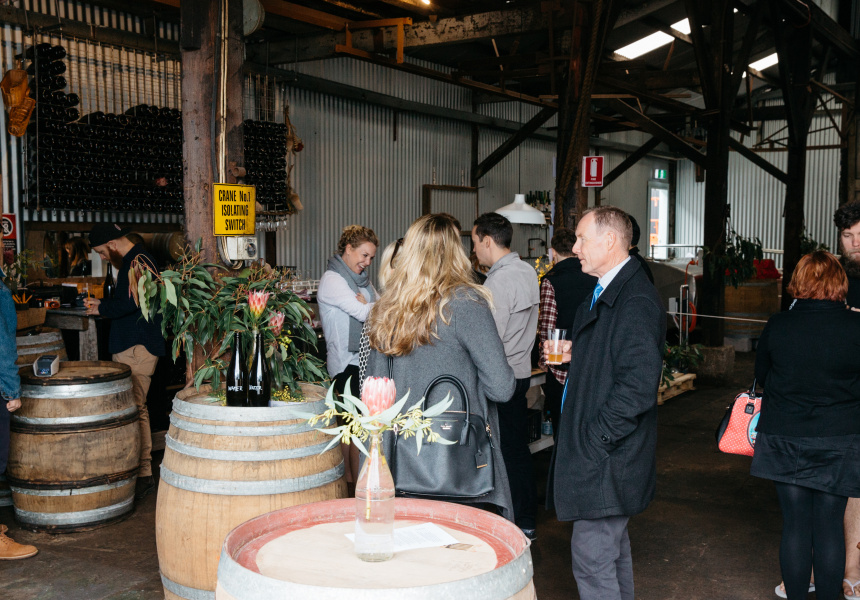 When great fermentation-focused minds collide, anything can happen. Like a beer made with grape skins previously used to craft wine.

The limited-edition Wildflower x Brash Higgins Zibeerbo – which is being released at Wildflower’s Marrickville brewery on Saturday March 23 – is a punchy, perfumed brew that looks more like wine than beer.

The pair, who both have a track record producing non-conventional, small-batch, bangers, met at natural-wine festival Rootstock in 2016 when Hickey, a former New York sommelier, poured Boehm a glass of Brash Higgins 2008 Bloom. It was love at first sip.

“I’d never tasted anything like that before,” Boehm says. “I was quite new to the whole idea of those types of wines – the more experimental stuff.”

The oxidative chardonnay was aged under flor (a process where a fine film of yeast forms on the surface of the wine) for eight years and packed an aromatic punch. “Having a nutty, oxidative, moreish, still wine was incredible. I was surprised that wine could be like that.”

Boehm was equally impressed by Brash Higgins’s ZBO (made using the Zibibbo variety otherwise known as Muscat of Alexandria). He travelled to South Australia to observe how Hickey fermented in a large clay amphora (a big-bellied vessel). The resulting aromatics reminded Boehm of Wildflower’s Gold beer. The rest is history, and two great minds embarked on a process of experimentation.

“It wouldn’t be very elegant to just put finished wine and finished beer together,” Boehm says. “There’s no finesse in that.”

Instead, they used pressed Zibibbo skins taken straight from the amphora after six months of fermentation. The skins were sent to Sydney where they were blended with a barrel of Wildflower’s eight-month-old Gold and an equal volume of freshly fermented Gold. After ageing and plenty of fermentation and skin contact.

There’s not much available. Wildflower will pour 40 litres at the brewery on Saturday and will release 500 bottles for sale. Adelaide’s The Wheatsheaf Hotel also has a 20-litre keg on pour.

If past collabs with winemaker and wine writer Mike Bennie and Sydney restaurant Ester (made using leftover sourdough) are an indication of popularity, Zibeerbo won’t be around long.

Wildflower x Brash Higgins Zibeerbo is released on March 23 from 2pm to 6pm at Wildflower Brewing & Blending, 11–13 Brompton Street, Marrickville. A limited amount of bottles will also be available online from 2pm.