The Beauty of Blending

Thalita Alves impressed no less than Scotch expert Dave Broom on her way to winning the Beauty Of Blends challenge at the recent Diageo World Class Australian Grand Final. We talk to Alves about her impressive winning cocktail and how it might be applied to the home. 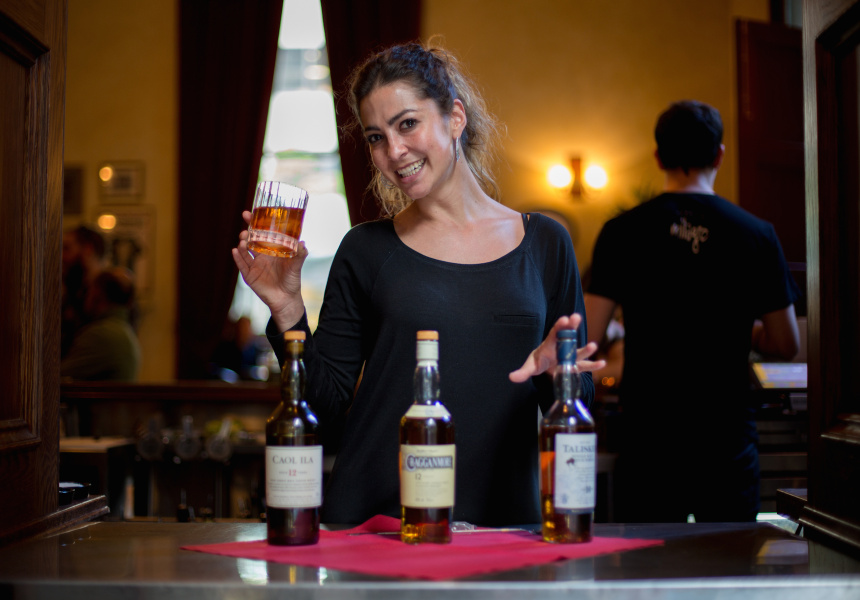 Thalita Alves is obsessed with books. Particularly books about flavours and herbs. “I may not have any food in the house, but I’ll always have a book on order,” she laughs. “I love understanding what I’m tasting. That goes for alcohol and food.”

On most nights you can find Alves working bar at The Gresham, a slick drinker deep in the Brisbane CBD. But otherwise she’s at home, perhaps making her own bitters or tasting different exotic herbs, often straight from the vine. “Sometimes I’ll chew on a herb before I put it into a cocktail,” she laughs. “It’s horrible, but at least now I understand how much of that I can put into a cocktail.”

Alves won on debut the Beauty of Blends category at the recent Diageo World Class Australian Grand Final in Sydney, impressing no less than renowned scotch expert Dave Broom in the process (working at The Gresham, with its intimidating wall of whisky options, no doubt helped).

The challenge was split into two parts.

First, the contestants had to create their own blended whisky. Broom asked them to consider the importance of occasion in creating their whisky and the Brazilian-born Alves tapped into Mother’s Day. “I miss my mum,” says Alves, whose mother is in Brazil. “She would get home from work and sit on the couch and enjoy a drink. So my occasion was relaxation, a moment to yourself at the end of the day when you’ve achieved everything you set out to achieve that morning.”

Alves named her blend Elisete, after her mother, and it was a hit with the judges. “I almost thought of the challenge as a big white wall,” she says, “and from there I had to add some colours. That’s why I tried to balance drop-by-drop, instead of throwing everything together.”

Next, competitors had to create their own take on a Boulevardier, Broom’s favourite cocktail of whisky, Campari and vermouth, which is itself a variation on the classic Negroni. Again, Alves knocked it out of the park. “I just tried to keep the occasion in mind – Mother’s Day,” she says. “I wanted to lighten the bitterness of the drink, so I used Aperol instead of Campari, but I also used a drier-style vermouth and switched out the orange peel for grapefruit.”

Again, Alves impressed the judges. “They didn’t ask for the perfect Boulevardier,” she says. “They simply wanted a good drink.”

For her troubles, Alves joined the ranks of the Diageo World Class Top 25, claimed a slick statuette and a “bunch of new friends”. But perhaps more exciting is that the whisky blend she created for the challenge will soon be available at The Gresham. “Maybe I’ll fly [my mum] over here for it. Can you imagine? I’m ‘gonna cry,” she says, laughing.

And her recipes, can translate to the home? “Of course,” Alves says. She won’t divulge the recipe to her own blend, but of her Boulevardier she says, “I would use 40ml of Talisker, then 20ml of Aperol, and 20ml of Cinzano Rosso. Put that in a glass with some ice, stir for a while, then add some grapefruit peel.”

Method:
Pour the ingredients into a mixing glass, stir them over ice and pour into a chilled old fashioned glass with a big ice rock. Spray the oils of a pink grapefruit peel and discard it.