Swing past in the mornings for bacon-and-egg rolls and coffee or settle in for steak frites and hearty pastas during long, boozy lunches. Plus, $6 wines and beers, and $10 cocktails during aperitivo hour. 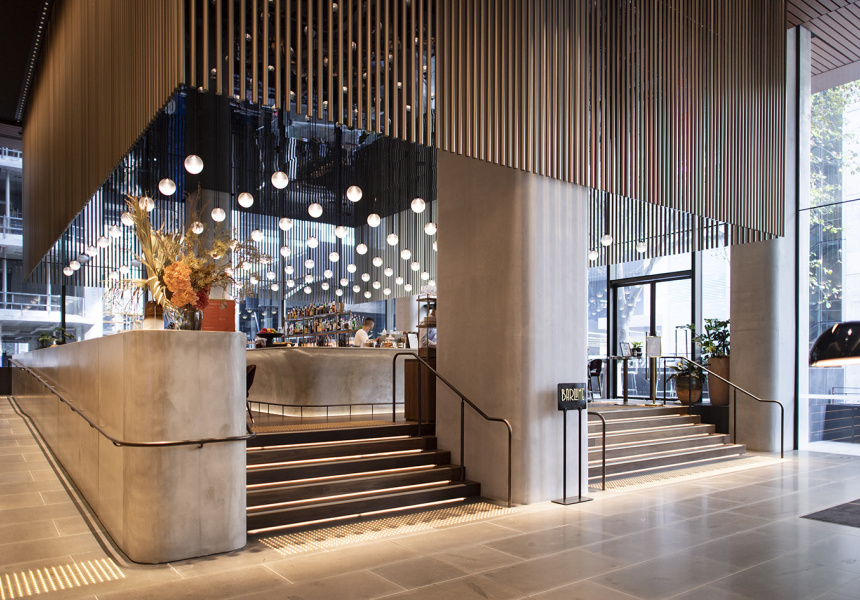 In the wake of a global pandemic that’s seen companies of every scale go remote, it mightn’t seem wise to open a venue targeting office workers in Sydney’s second CBD . If anyone can pull it off, though, it’s Adam Choker.

After helping his brother Ramzey open eternally popular, multi-faceted venue The Grounds of Alexandria, Choker co-founded Happy As Larry in 2015, a food truck that gained such a following it launched a permanent venue in Wynyard’s Metcentre not long after. He then went on to co-found Flower Child Cafe in Chatswood, a playful diner that was so successful it spawned a second location in Brookvale.

With its striking interiors, modern cafe menu and warm, efficient staff, Barlume is set to achieve a similar level of adoration.

The breakfast menu is packed with morning classics ideal for a pre-work meal: there’s a quinoa porridge with seasonal berries; a green bowl loaded with stuff that’s good for you (freekeh, avocado, tahini and kale); and a bacon-and-egg breakfast bun. A series of “healthy bowls” – including a punchy version with brown rice, turmeric cauliflower, avocado, pineapple salsa and corn chips – make a great weekday lunch, while heavier items such as a chunky beef-brisket sandwich, steak frites, a Wagyu beef burger and pastas are made for settling in for a long, boozy Friday session. Most items can be ordered to takeaway if desk lunches are more your speed.

Aperitivo hour runs from 4pm until 6pm on Thursdays and Fridays, with $6 wines and beers, $10 cocktails (including spicy Margaritas, Espresso Martinis, Aperol Spritzes and Negronis) and free nibbles.

Plans for Barlume were laid pre-pandemic, but Choker explains that he was keen to go ahead with the project regardless.

Choker means it when he talks about keeping it in the family. As with The Grounds, his sister Caroline Choker – co-founder of leading Sydney design firm Acme (Mimi’s, Fred’s, Archie Rose) – was involved, working on the interiors and furnishing of the sleek, industrial-style space created by architect firm Bates Smart in the lobby of North Sydney’s tallest building (the new Sydney base for Nine and Microsoft). A mesmerising series of bare bulbs hang from the high ceiling, and a curvaceous concrete bar dominates the centre of the room; light-brown leather banquettes, maroon-clothed chairs and bright artworks soften the grandiose, glass-walled interior.

In building the operations team, Adam explains that he got lucky in finding a crew of hospitality superstars who had worked together before and were keen to stick together. Head chef Jimmy Ryu worked at Australia’s first Jamie’s Italian, in Sydney, and travelled around Australia as the English-Italian restaurant group expanded. From there, he led the kitchen at The Morrison. His sous chef, Jonathan Dobbin, and chef de partie, Hazahab Putragading, at Barlume have worked with him for 10 and five years respectively.

“The fact that they’ve stayed together just demonstrates what a good [person] Jimmy is, and that goes for the whole team here – they work so well together,” Choker explains as Victor Shrestha, the venue manager (and also a Jamie’s alum), offers us another spicy Margarita.