Barbarello’s: A Pop-up With Pizza and Hip-hop

Arcade games, R. Kelly and pasta with peas and bacon. 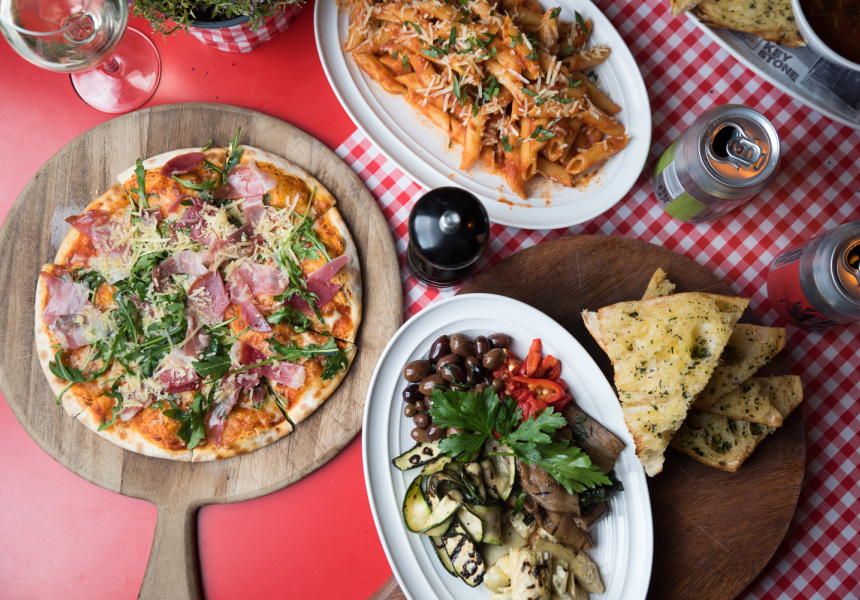 When Keystone Group was deciding what to do with Sugar Mill’s level-one space temporarily, it came across a famous photo of the Beastie Boys outside Stromboli Pizza in New York City. In that moment, Danny Barbarello was born. The first experiment to fill the space is inspired by the character of Danny, the owner of an old-school Italian restaurant recently overrun by hip-hop ruffians.

“We wanted a name that gave an instant identity to the venue, something that summed up the red-and-white-checked table cloths, the simple hearty pastas and pizzas and the pinnies in the corner,” says Chris Jolliffee, the general manager of Sugar Mill. He was part of the initial brainstorming team that gave birth to Barbarello’s gritty takeover. “With the limited 12-week life span we’ve placed on this particular pop-up, the name needed to clearly capture the atmosphere of the space from the get-go.”

The menu, roughly scratched across blackboards, has the kind of Italian comfort food you’d expect to find hastily thrown together in a ‘90s American-Italian diner. There’s pizza, thick crust with a crisp base and littered with mock-classic toppings and pasta with peas, bacon and tomato and a creamy mushroom and chicken sauce. “It’s nothing too fancy. We just thought: ‘Keep it simple, keep it really cheap’,” Jolliffee says. With a backdrop of flashing arcade games and a playlist featuring NWA, Dr Dre, Nelly and R. Kelly, it all feels incredibly familiar, apart from the prices, which are outrageously cheap. The house wine is also inexpensive, labelled in the most unpretentious way possible – red or white and bold or light. If that doesn’t sound budget-friendly enough, go on a Monday and get two-for-one pastas.

There’s also Young Henry’s tinnies and Italian-styled slushy cocktails. “The slushy cocktails are a bit kitsch, a bit naff, but they're fun. We’ve got our house Negroni that we developed with Four Pillars Gin.”

What’s next after Barbarello’s closes in September is anyone’s guess. Jolliffee hinted Newtown’s Freaky Tiki could make an appearance, but it’s still up in the air. “We’ve got a lot of flexibility, so we want to go way out there. We can turn it into anything at all.” The team are open to pitches if you’ve got a bar idea you’ve been sitting on.

Barbarello’s will finish up on September 1.