May the Force be with you (to get through a whole one). Food fads come and go, but unnatural food colouring just keeps on keeping on. Take the unicorn Frappuccino that’s driving baristas up the wall. Or the rainbow bagel. And let’s not start on the doughnuts.

But when a burger joint we respect decides to honour Star Wars with a burger, well, we'll tip our cap.

Bar Luca has made a purple and blue burger called the “Return of the Chedi” – just in time for Star Wars Day on May 4. It has a beef patty, American cheese, triple-smoked cheese kransky, red cheddar-cheese sauce, pickles, spicy ketchup and a “galaxy” milk bun.

“The boys in the kitchen are big fans,” says Bar Luca's owner, Sarah Robbins. “I like playing with all the puns, we had a lot of fun with this one, coming up with heaps of different names,” she says.

More importantly, how have they made the coloured buns? “Our amazing baker does them at St Malo. He [dyes the dough] all the different colours, folds them together and then they get rolled out,” she says. “Some people complain ‘there’s not enough galaxy in my bun’, but they are all different. A lot of them are just blue on outside, but open them up and the colours are whirled in,” she says.

“When we do rainbow or galaxy burgers, we get queues. We know it’s going to blow up.”

Next? A Pulp Fiction-themed burger.

The Return of the Chedi will be available at the CBD store until Saturday. The Oxford Street and Bondi stores will run the burgers until Sunday. 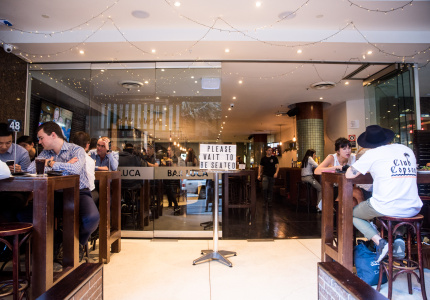