With vegan spanakopita, moussaka with baked eggplants and cinnamon cookies. 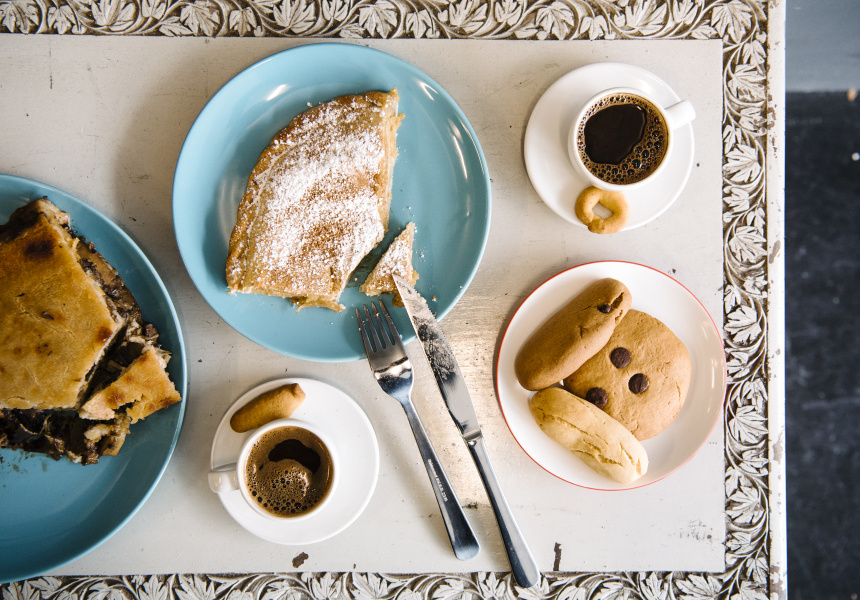 The Greek Vegan Bakery, which opened in Revesby six months ago, has expanded to Newtown. Its married owners, Pavlos and Fioroula Katsivardas, claim to have opened Australia’s first all-vegan Greek bakeries – and it seems to check out.

“People told us they would drive two hours to our Revesby shop, so we thought we should open a shop closer to the vegan community in Newtown,” says Katsivardas.

Visit for vegan versions of traditional Greek pastries including spanakopita piled with spinach, leek, dill, and feta “cheese” (the bakery uses Oliana vegan cheese made from coconut oil imported from Crete). And and moussaka with baked eggplants, potatoes, minced mushroom and soya cream.

How does one manage a spanakopita without cheese, you might ask? This bakery uses Oliana vegan cheese made from coconut oil imported from Crete in Greece.

For something sweet, head to the cookie jars and treat yourself to the koulourakia (Greek cookies), which come in cinnamon, choc-chip and orange flavours. Dip them into a cup of stove-boiled Greek black coffee made with ground beans imported from Greece. There’s also bougatsa (crisp filo pastry injected with custard), made with almond milk and oranges.

Despite their evident passion for vegan food, the Katsivardas family hasn’t always been strictly vegan. They converted their diets after seeing their beloved 10-month-old pup, Croiff, suffer after being poisoned in their backyard at home. The family even keeps a framed photo of the pup at the counter of the Revesby bakery. “We want to contribute to a cruelty-free world,” Pavlos says.

With the lifestyle change came the discovery that being Greek and vegan weren’t worlds apart. Greek philosopher Pythagoras was one of first known vegetarians, after all. There’s even a giant mural of the Greek philosopher himself along with a map of Greece painted on the wall by artist Camara Felipe. This artwork, along with the dark wooden tables and chairs in the cafe, could easily be mistaken for furnishings borrowed from your typical Greek restaurant located in some small costal town in Greece.

But the retail shop is only one part of the business. Come weekends you’ll find their stall at the monthly Sydney Vegan Market, as well as the Windsor and Paddington markets. The duo is also looking at potentially expanding to Melbourne in the future, too.