American BBQ: Kissed by Flames and Licked by Smoke

Over the next few months, Broadsheet is embarking on a journey through the anti-established and incredibly slow iteration of fast food – American BBQ – to uncover the secrets behind the smoke with Bulleit American Whiskey. 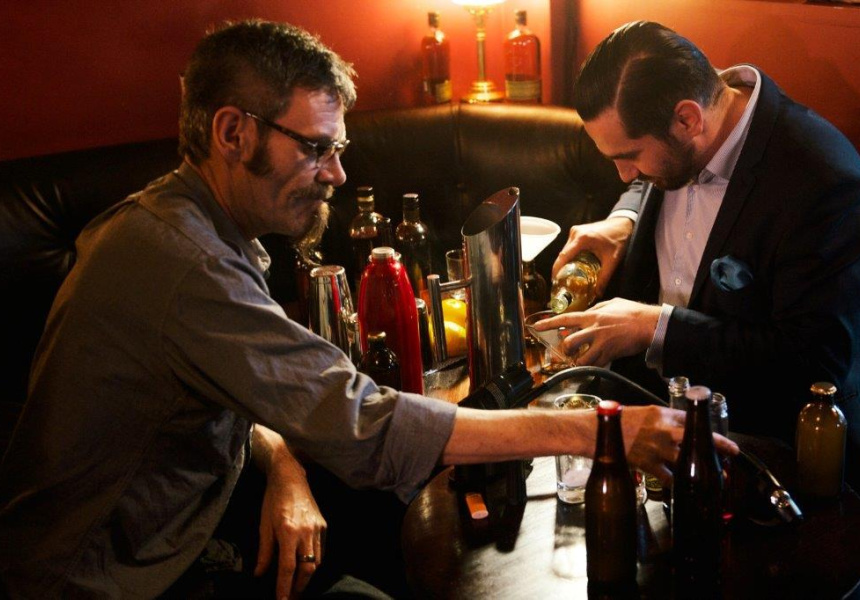 Maybe it’s the elemental force of fire, or perhaps it’s the primal appeal of a charred beast, but anyone who’s ever held a pair of tongs knows the power of barbecue. While we’ve all felt like a boss with chop in hand, we’ve noticed something of shift in the barbecue landscape, with a handful of resourceful types taking cues from the long, low and slow history of American barbecue, a culinary force that’s been developed over decades in the States.

Forging their own way, those at the forefront of the movement in Australia are rejecting the conventions of restaurant dining and heading outdoors to tend to the smoke billowing from big black pits and smokers that look like train carriages, stacked full of meat that’s been cooked until it’s almost impossibly tender, juicy and flavoursome. Taking inspiration from the great ‘Barbecue Belt’ in the United States of America, this style of barbecue is about doing away with unnecessary frills and focusing on what’s important: really good meat, cooked slowly.

All cultures cook with fire, but the term ‘barbecue’ comes from the Caribbean, where barbacoa refers to cooking a hog (or goat) in a fire pit. The technique migrated all around the world, but was received with particular enthusiasm by those in America’s Southern States. Immensely popular in the US, chefs cooking either in smokers or pits are fiercely competitive about their craft. Meat lovers flock to massive establishments like Hill Country in New York or the more experimental Fette Sau in Brooklyn, just as they do to little shacks with outdoor smokers like Spooney’s Bar B Que in Mississippi and Franklin in Austin, Texas.

Over the last couple of years, some passionate barbecue masters have emerged here in Australia with. In Melbourne, Fancy Hank’s BBQ are serving up ribs and briskets from their giant smoker. At The Gem in Collingwood, they’re working off their hot link sausages while dancing to Johnny Cash. At The Dip in Sydney, kids ready for a night on the dance floor are dripping barbecue sauce down their fronts after pulled pork rolls. And up in Byron Bay, JR’s Smokehouse is trundling a mobile smoker full of Southern-style chicken to muscle car meets and white weddings alike.

These guys – as well as joints like Meatmother and Big Boy BBQ in Melbourne – are bringing the Southern traditions and atmosphere to Australia, only with an Antipodean twist. Andrew Levins of The Dip reckons the anti-established dining style of American barbecue is the perfect counterpoint to an overinflated restaurant culture. “People suddenly realised that it was just as okay to be obsessed about burgers and junk food as it was to be obsessed about degustation and fine dining,” he says. “I think barbecue is the perfect meeting of the two: it’s incredibly slow fast food.”

Levins became a barbecue convert when he was 12. “I went to Memphis with my family and I tried pulled pork for the first time,” he recalls. “Since then, my dad and I have just tried to recreate that sandwich over and over again.”

Another explorer of the Barbecue Belt, Paul Reitmier (of Silver Creek Smokers) also attributes his obsession with the smoker to hanging out with his dad. “It was pretty nostalgic, to be honest,” he admits. “It’s probably from the days of barbecuing in the backyard with my old man. That’s how it started, at least.”

Reitmier began by experimenting with some ribs on a smoker he fashioned from a 20-litre steel drum and nowadays he can’t keep up with orders for smokers he makes from quarter-inch steel through his business, Silver Creek Smokers. “I’ve been building these pits for a long time,” he says. “But probably in the last two years, they’ve really taken off. Before that, I couldn’t give them away.”

The real secret to getting that smoky, charred skin and tender flesh is cooking meat over a low heat, slowly. The meats are rubbed with spices and smoked at low temperatures for up to 16 hours, which keeps the meat low in fat. For dishes like pulled pork, brisket and ribs, the meat only begins to really fall off the bone after several hours cooking in the smoker. Because the heat isn’t directly on the meat itself, it allows the inside to cook evenly without cindering the outside, creating a thick, dark, barky crust that’s “kissed by flames and licked by smoke”, as Lance Rosen of Big Boy puts it.

In addition, the smoke from the wood cures the meat while imparting that incomparable flavour. Reitmier reckons we should think of smoke as a seasoning that brings out flavour like salt or pepper. Reitmier sees slow cooking as the most faithful way to appreciate the characteristics a great piece of meat. For him, respecting the produce is the single most important aspect of barbecue.

Melbourne’s mobile barbecue Fancy Hank’s will keep a piece of meat in the smoker for as long as 16 hours. “What appeals to me is just cooking with raw materials,” says barbecue cook Mike Patrick, one half of the mobile business. “There’s something about the heat source…there’s a dryness to it. The brisket, it’s just black and hard, you’ve got to sharpen your knife just to get through it, then it’s succulent underneath. It’s a textural thing.” Arriving with coleslaw, potato salad, pickles, corn bread and their house-made spicy BBQ sauce, Hank’s is serving up traditional America barbecue on trays lined with butcher’s paper, just like they do back in Texas.

No fine china, no plates, blues on the turntable, whiskey rather wine and fingers rather forks – barbecue is rough around the edges and that’s just how it should be.

Broadsheet is spending the next three months exploring American barbecue and the culture that surrounds it with Bulleit American Whiskey, a Kentucky bourbon distilled by Tom Bulleit, the great, great grandson of its creator, Augustus Bulleit. Bulleit celebrates those who forge their own path in life and make a point of deviating from the mainstream. This is grounded in the brand’s American roots and small batch credentials, starting with the founder’s story and decision to create a new frontier for whiskey because he wasn’t satisfied with the drop available at the time.

For us, this will be an exploration into people who are rattling the can a bit, who are anti-establishment in their methods, and who are doing American BBQ their own way, just as Bulleit celebrates those who forge their own way in life. We’ll investigate the best cuts, the secret techniques of smoking and speak to the local masters of American barbecue. We’ll listen to every Bo Diddley record and we’ll drink every five-alarm hot sauce.

Keep checking in with Broadsheet for recipes for BBQ sauce and fat washing with whiskey, plus general barbecue know-how and some special events to come.