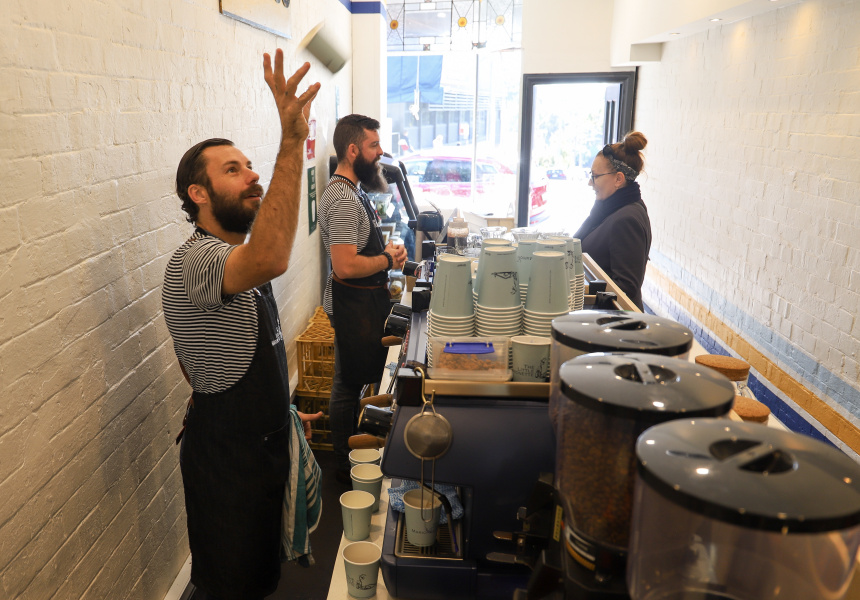 Even before it “officially” opened at the end of May, Little M was abuzz. Despite a lack of signage and minimal publicity, word-of-mouth had drawn fans of The Little Marionette. They had come because the new Balmain cafe is the latest project of its namesake roastery’s founder, Ed Cutcliffe.

The beans used by it and many other cafes across Sydney are roasted around the corner in Little Marionette’s warehouse, with every aspect of the coffee-making process finessed by a crack team of obsessives.

The roasters they use are 70-year-old German behemoths, which Cutcliffe says gives the coffee a deeper and more caramelised flavour than modern machines do. They’re made of cast iron, which isn’t used to make machines these days because of cost. And in the Darling Street cafe the coffee machines have been modified to restrict the flow of liquids, which adds even more depth to each brew.

Each day Little M offers customers a rotating choice of filter, single-origin and two blends of beans. “You can’t force your flavour on everyone,” says Cutcliffe while making a flat white and a mocha.

Little M has taken over the site of Adriano Zumbo’s former and highly regarded patisserie, which closed in 2018 after the company went into voluntary administration. It’s narrow, with a cosy floor plan, and because it’s north facing there’s lots of natural light.

When Cutcliffe’s not racing go-karts with his employees at the roastery, he’s both behind and in front of the Little M coffee machines, making it feel more lounge room than main-street cafe. Mums and dads wander in and out with their kids, and animated banter punctuates the space.

The opening is something of a homecoming for the company. Since expanding around Australia and into the UK and US, it hasn’t had a cafe presence in its home of Balmain in almost a decade (it does have two other inner-west locations, one at Harold Park’s Tramsheds, Garcon, and at Annandale’s Trafalgar Street Espresso).

Brunch staples – such as bacon and egg rolls, chia puddings, pastries and poke bowls – are brought in from many of the inner-Sydney eateries Little Marionette supplies beans to.

With a long history in the industry and staff with fine-dining experience, Cutcliffe isn’t shy about his hopes for the cafe. “Hopefully on the back of us doing this the foodie scene in Balmain starts to lift again.”