An Eating Guide to Campsie 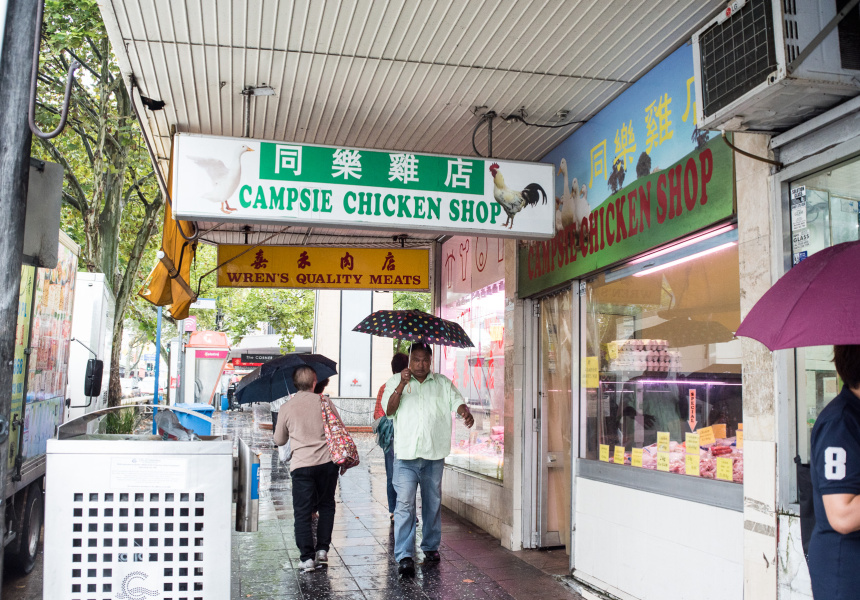 Even mid-week Campsie’s main drag, Beamish Street, is crowded with people going about their shopping and stopping for snacks and a chat. Noodle shops display fried duck heads out front (for takeaway), and bakeries selling dumplings and sweet buns labelled in Chinese are everywhere.

There are restaurants and grocery stores from all over Asia – Malaysia, Indonesia, Thailand, Vietnam, Korea, China, India and Nepal – but China and Malaysia are best represented.

King of Buns
Around the corner from Campsie station in Anglo Road Square you can get a filling lunch for a song at King of Buns. The hearty northern-Chinese buns are made from fluffy, white, slightly sweet steamed dough packed generously with fillings. Simple pork and cabbage is the best of the meat buns, but try the vegetarian version too. Bright Chinese greens are mixed with mushrooms and finished with plenty of sesame oil.

Albee’s Kitchen
The 5am opening time on the sign at Albee’s seems like a mistake, but the Malay-Chinese restaurant does its busiest takeaway trade when much of Sydney is still asleep. Tradies come here to pick up lunch: containers of rich chicken curry, and bak chang (sticky rice dumplings with pork belly and chestnuts wrapped and steamed in banana leaves).

The classic laksa at Albee’s is always good, but for something different try the penang asam laksa, a salty, sour, mackerel-based soup served with thick, chewy noodles, fresh pineapple pieces, and a spoonful of tamarind puree.

Golden Crown Yummy Express
Although Albee’s is better known, the charmingly named Golden Crown Yummy Express directly across the road has some good regional Chinese-Malaysian cooking. Skip the noodle dishes in favour of rice. The Hainanese chicken is silky, full of flavour and served with garlicky, gingery rice and a little dish of house-made chili sauce. The nyonya curry fish isn’t on the lunch menu but you can get it if you ask. It’s a whole fish fried crisp and finished with rich, spicy sauce and chunks of capsicum, pineapple and onion.

Leroy Chinese Dim Sim Cake Shop
This cheerful little shop is just to the left as you exit Campsie station. It’s where locals stop to gather a couple of pastries on a small serving tray and talk with the chef, whose head always seems to be popping out of the kitchen to chat while he cooks.

The offering is small, but what’s there is done well. The round, sesame-seed-rolled red-bean buns can be found all over Chinatown, but these are some of the best: light and crispy on the outside and chewy and sweet inside.

This huge space is just off the main road near the station. Each table has a recessed hotplate and shiny exhaust fans that hang from the ceiling.

The buffet offers an array of meats waiting to be cooked at the table. There’s the popular soy-and-garlic-marinated bulbogi (beef); fatty, marbled skirt steak; pork belly; ribs; and prawns. To make the most of the variety come with a big group and an empty stomach.