This year, Lagavulin celebrates 200 years. We look at a whisky cocktail that’s almost as old. 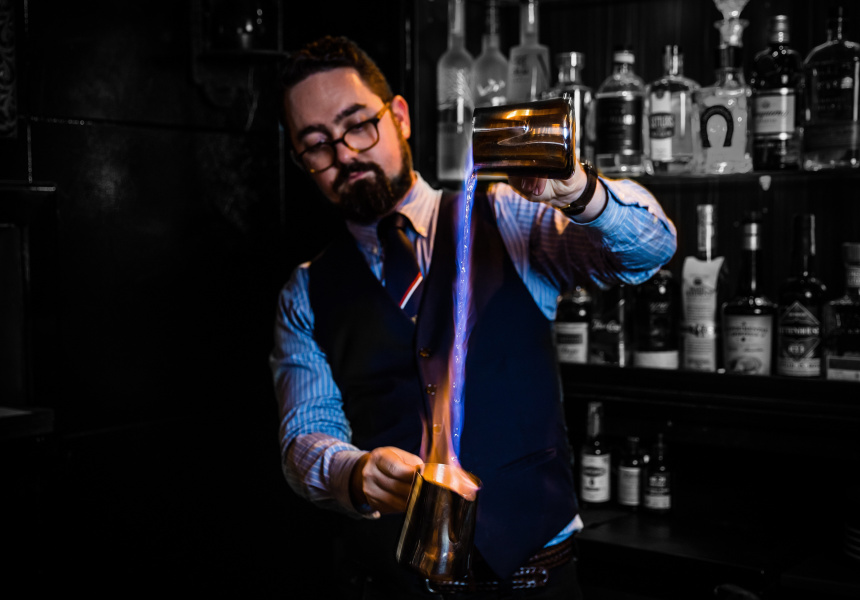 The Blue Blazer was the first flaming cocktail.

The isle of Islay (pronounced “eye-lah”) south of the Scottish mainland is home to some of the world’s greatest distilleries. One of those great distilleries is Lagavulin. This whisky, beloved of fictional Parks and Recreation character Ron Swanson, is well known for its big, peaty flavours.

This year, Lagavulin celebrates 200 years. It was 1816 when local farmer and distiller John Johnston converted what was a cluster of illegal distilleries into the Lagavulin distillery. Although it’s seen a few owners since then – notably James Logan Mackie and his nephew, Peter, who made Lagavulin a household name from the 1860s – it has consistently produced quality single malt whiskies to an age-old tradition.

To celebrate its anniversary, we look at a whisky-based cocktail that’s almost as old. We chose the Blue Blazer.

The Blue Blazer was one of the first flaming cocktails. It was, allegedly, invented in the mid-1800s by a barman named Jerry Thomas. “Jerry Thomas is the founding father, if you like, of cocktails,” says Sean Baxter, Diageo National Whisky Ambassador. “He wrote the very first bartenders’ manual, called How to Mix Drinks. He spread the concept of what cocktail making was; so in effect created the industry.”

The Blue Blazer is a wonderful winter drink, but it’s definitely an advanced bartender’s cocktail. It is, essentially, a twist on a Hot Toddy: the twist is that the entire drink is lit on fire. “If not the first, it’s certainly the most famous flaming cocktail,” says Baxter. “It was flamed to create that incredible theatre. It would have lit up the room, and created a name for whichever bartender was doing it.”

“But one of the coolest things about it,” Baxter adds, “is that even though Thomas was an American bartender, making American drinks in America, his recipe for a Blue Blazer calls for Scottish whisky.”

The Blue Blazer is a whisky lover’s cocktail. When made with Lagavulin, it becomes even more so. “When you heat it up, you create more aroma, you increase the spice and the overall flavour of Lagavulin,” says Baxter. But he thinks that’s pretty cool. “There’s a perfect timelessness around the way that we we consume whisky,” he says. “Other industries change, they go in and out of favour or they become outdated.

“Regardless of how much people and culture and civilisations change,” Baxter adds, “Lagavulin has always been consumed in the same way, every day, for 200 years.”

Method:
Warm a heat-resistant glass and add the sugar and lemon peel. Using two separate jugs (stainless-steel coffee mugs work perfectly), add Lagavulin Scotch whisky to one, and boiling water to the other. Using a kitchen blowtorch, heat the whisky until it lights. Very carefully, pour the whisky into the jug with the boiling water. If the flame goes out, relight it. Carefully pour the whisky and water back into the original jug. Repeat this 10 to 12 times. Pour the hot whisky into the heat-resistant serving glass.

Please note, this cocktail recipe should only be made by someone with bartending experience. For a simpler version, do not light the whisky, and enjoy this cocktail as a Hot Toddy instead.