Working inside his own fashion bubble, Toni Maticevski continues his quest to understand how women want to dress. Toni Maticevski in his studio with model Lulu Wagstaffe. 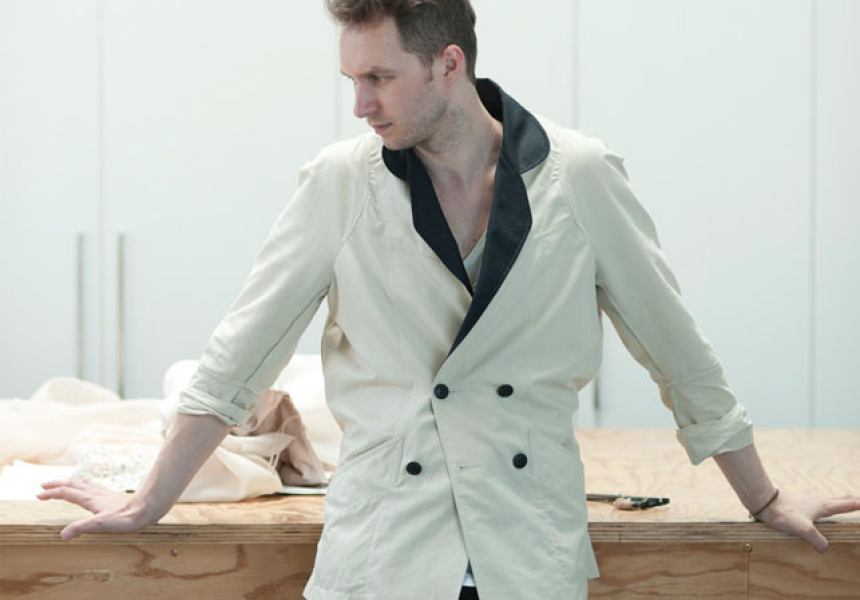 To walk into Toni Maticevski’s Yarraville studio is to enter another world. Outside, container-carrying trucks barrel down the road somewhat threateningly and the industrial surrounds make you wonder if you’re in the right place. But just a glass window away is the serene Maticevski studio, with assistants padding around polished concrete floors, filtered light, lots of sheer curtains and the man himself, today hand-stitching one of his intricate designs.

Maticevski established his eponymous label 13 years ago. In the years since, he has shown in Paris, New York, ridden the wave of hype and eventually settled into life in Melbourne, doing his thing from his Yarraville base. Like the legendary Parisian Azzedine Alaia, who refuses to bow to the gruelling modern fashion calendar of spring, resort, fall, pre-fall and more, Maticevski lets fashion come to him, not the other way around. The cycles of trends, ‘it’ girls and ‘the next big thing’ stop at the door, while inside, Maticevski works away, quietly and without fuss.

It’s in this spirit that Maticevski has found himself not only with a well-received ready-to-wear label, but a thriving bespoke private client service. He’s been taking clients on since the very beginning, embracing the experience as real-life research. “It just evolved and I just kind of went with it,” he says. “My clients were paying me to learn so I learned about women’s bodies – what they hated, what they loved, what they wanted to hide, what they wanted to show off.”

But don’t be mistaken, this doesn’t mean media darling Maticevski has turned dressmaker. Instead, he’s creating couture-esque wonders – one-off pieces infused with his signature embellishment and detailing, celebrating femininity and above all, the woman herself.

Maticevski understands his work as a collaborative effort and it’s clear he relishes the opportunity to understand how stylish women approach the process of dressing themselves on a daily basis. Indeed, unlike many designers, who seem to think their clients spend their lives in cocktail dresses, Maticevski is keen to engage in a kind of everyday dressing and exert his influence on it.

With regular clients, all Maticevski needs is a phone call to kick-start the process. “I’ve worked out by their taste levels what they’re after,” he says. Having become familiar with the client’s favoured silhouettes and fabrics, there’s little consultation needed, it’s simply a matter of flattering the client’s body and making her look her best. “It’s kind of easy now,” he admits.

All of this knowledge comes in pretty handy when it comes to working on his ready-to-wear label. Maticevski himself seems to not quite believe his luck. “I can store all these things about how women want to dress and then utilise it when I’m working on a range. It’s market research, but I get paid to do it. It’s amazing.”

And it is perhaps this, more than anything that has drawn him back to Australia. His label’s first four seasons saw him showing in Paris, which were followed by shows in New York. In the past two years, however, his focus has shifted back to his native land and particularly his hometown of Melbourne. The private client service played a big part in this. “There’s been a lot of reassessing of where my brand is, what it was turning into and all that sort of stuff. So it’s just pulling everything back and rethinking.” When he returned home, “Australia was right. And when I did New York, it was right. So there’s all these kind of things that happen and I just roll with it.”

When talking to Maticevski, it becomes apparent that this approach of rolling with it has served him well. His return to the Australian stage last year with a show at Rosemount Australian Fashion Week in Sydney saw him welcomed back with open arms. This year, he’s starting with a retrospective of sorts at L’Oreal Melbourne Fashion Festival. “It’s nice to do it in Melbourne,” he says. “I haven’t shown here in a long time.”

As one of just two designers on the official program with their own show (Alex Perry is the other), Maticevski will close out the week with a Red Carpet Runway. “There will be elements of ready-to-wear and then there’ll be pieces from the archive. I don’t know exactly yet though!”

Whatever he shows, we’re just happy Maticevski is back on home soil, doing his thing and proving that you don’t have to shout to be heard.