After interning for Alexander Wang, showing at LMFF and winning the Glue One Percent Design competition, we talk to one-to-watch, Australian designer Kara Liu, as she is about to release her self-titled fall/winter’14 collection, plus two new collaborations. 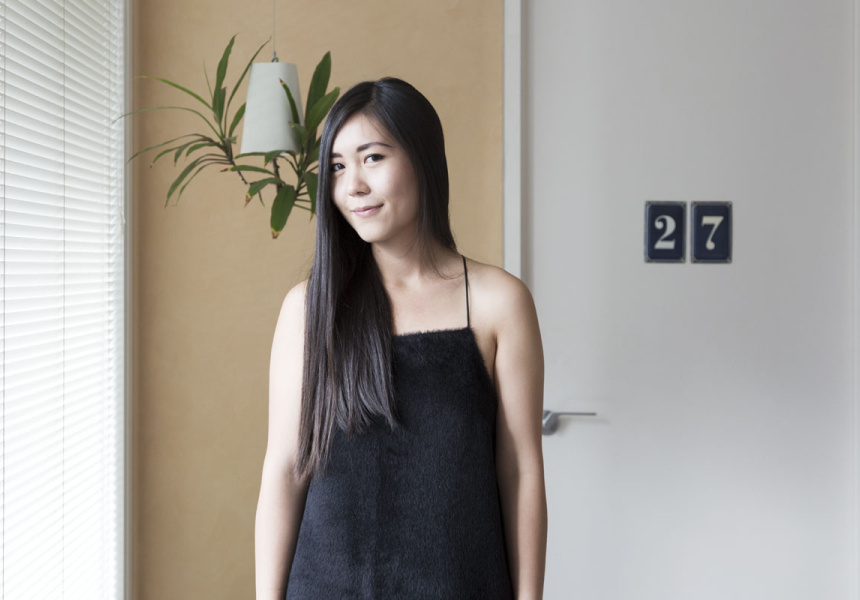 Despite the all-black ensemble, Kara Liu doesn’t dress with the visual theatrics of a typical fashion designer. The simple scoop-neck T-shirt and high-waisted jeans implies a laid-back approach to dressing that is elegant and comfortable. Which is exactly the kind of clothes Liu designs.

“I design clothes for the wearer,” explains the Shanghai native who came to Australia at the age of 12. “I want customers to touch my clothes, to want to try them on and think, ‘This is going to look good on me.’” At first her statement may seem obvious. But the fervour in fashion circles for status items and what Liu describes as “peacocking” suggests that in the current climate, designers are designing for customers who wear clothes for an audience rather than for themselves. In order for her customer to establish a relationship with her garments, Liu sews functional secrets into each item of clothing, purely for the owner to discover and enjoy. A hidden pocket on the inside of a coat, for example, may only be found once the item is worn multiple times.

Although fashion is primarily a visual aesthetic, Liu’s design ethos begins with utilising a more intimate sense – touch. Having worked part time at Saba while completing her fashion degree at RMIT in Melbourne, Liu learned the importance of hanger appeal and the visceral act of feeling the fabric to spur a customer into the changing room. Her focus is on high-quality fabrics she sources from her overseas travels, while her strict attention to detail produces those items in your wardrobe you keep going back to. Her fall/winter collection for 2014 is a testament to this – alpaca blanket jackets are offset by sexy, silk tank dresses. “Contrast is the key,” she confirms, “the heavy and the light, the fluid and the crisp.”

The inspiration for Liu’s collections are also focused on feel. “Inspiration comes to me wherever and whenever in everyday life. I don’t really get inspired by a song or a poem,” she admits, “but I may be inspired by the texture of a glass at a cafe”. This emphasis on the composition and weight of a material, and its correlation to the way it sits and shapes the body, is something Liu picked up as an intern at Alexander Wang. She held the coveted position as one of Wang’s interns straight after finishing her degree, where she cut her teeth creating patterns, assisting on design and detail development, sourcing and interacting with manufacturers in New York. Her Chinese background also came in handy. “Many of the pattern-makers and machinists were Chinese, so I was often asked to translate,” she explains – an integral role when slight nuances in translation could affect the final product. The helping hand worked both ways, and Liu learned valuable skills from them in return.

Before even promoting her line, Liu has been picked up by eclectic boutique Milly is Sleeping in Carlton and will be the only overseas designer to be featured in the online American store Young & Able. While doing an internship with retailers Glue Store, through its One Percent Design Competition, it spied a talent so strong that Liu was asked to collaborate with them instead. Her 50-piece collection, called Kara Liu for Glue, will be in stores ready for winter and her collaboration with Belmore Bootmakers (an Australian-designed and made footwear label) will see her classic footwear in stores at the end of March. With talent like this, it seems Liu’s clothes just speak for themselves.

For a list of locations of all Glue stores see: gluestore.com.au/stores.