In cafes, bars and restaurants around Sydney, digital currency bitcoin is slowly becoming an alternative way of doing business 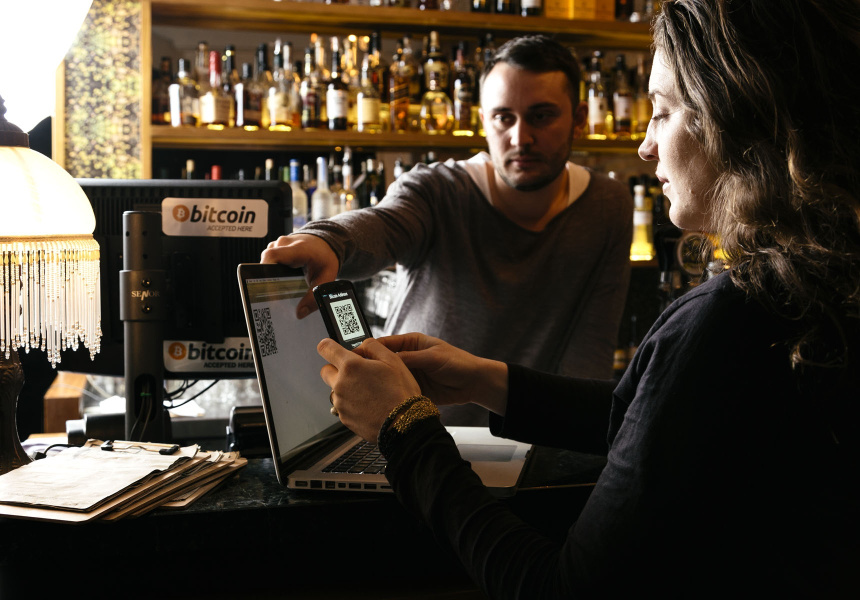 If you can imagine paying for a coffee with a line of code, you’ve made the first step to understanding bitcoin, a virtual currency created in 2009.

As of last month, 28 businesses around Sydney were accepting bitcoin as a means of payment. For a virtual currency barely five years old, and with no central authority, it’s an impressive leap of faith for those cafes, bars and restaurants.

Bitcoin’s popularity rose in the months following its launch on the world market, followed by other virtual currencies such as Dogecoin and Litecoin. Last year Australia’s first bitcoin ATM was installed inside Westfield Sydney, where customers could securely purchase bitcoins with cash. At the time of writing, one bitcoin is worth around AU$648, so customers can expect to spend something in the area of 0.0054 bitcoin for a flat white.

While Melbourne is widely considered Australia’s bitcoin capital – owing to its larger number of early adopters – Sydney is not far behind. The currency’s growth, however, is definitely still in its early stages.

Jason Newton, owner and operator of The SG on York Street has been accepting bitcoin at the bar for almost six months after being approached by a customer interested in the virtual currency. “I did a fair bit of research on it and asked a few questions, so it probably took me a good seven weeks before I actually said yes,” says Newton.

Despite the currency being traded globally, and there being a considerable amount of information online, the spread of bitcoin-friendly payment systems in cafes, bars and restaurants has been slow around Sydney. “It’s a lack of knowledge and fear of something new,” Newton says. “There was a lot in the media when [its value] crashed from $1200 down to $700 [in late 2013].”

Using a point-of-sale system on his iPhone, payments made in bitcoin are automatically exchanged to Australian dollars the next day in remittance. For Newton, the risk seems to have been worth it – The SG cracked the $5000 mark in bitcoin revenue last week.

Other businesses that have taken the leap haven’t shared the same success as Newtown. Owner and operator of Black Star Pastry, Christopher Thé, has been accepting payment by bitcoin since May, and even has a bitcoin ATM inside his Rosebery store for customers to use. “The uptake hasn't been great yet, and honestly I'm not sure if it's ever going to be,” says Thé, who receives on average between 12 and 20 dollars worth of bitcoin per day.

While Thé agrees the platform is worthwhile and is easy to set up, it doesn’t have the broad appeal or awareness among Sydneysiders it needs in order to flourish. “I don't think people use it or really need to use it – it's really a niche thing,” he says. “I think people use bitcoin because of a sense of idealism or futurism,” Thé adds.

For the time being, the incentives to offer bitcoin payment are few, but interest is spreading in Sydney as well as elsewhere in Australia. Many cafe and bar operators are drawn to the lower transaction costs than are offered by Visa and Mastercard. There is also genuine curiosity in what is a novel way of doing business.

But for cafe and bar owners who deal with hundreds of small transactions a day, Newton can only imagine the currency’s growth. “People may think it's a flash in the pan, but for the time being I'm happy with it and it works well.”