Silence in the Valley

Hide yourself away at Emirates Wolgan Valley Resort & Spa, one of Australia’s most luxurious locations. 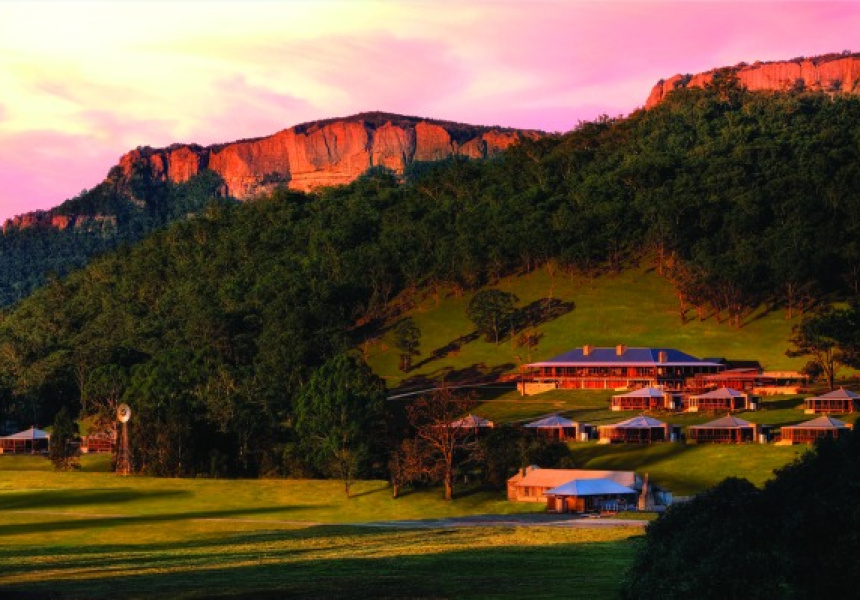 As you climb Bells Line of Road, wind over the scrubby Blue Mountains and descend into the lush bit of land that houses the Emirates Wolgan Valley Resort & Spa, your phone reception will be zapped. Two-and-a-half hours from Sydney, and surrounded by a thick ring of looming cliffs, there are no calls from frantic bosses here.

Set over a vast 4000-acre, entirely carbon-neutral nature reserve, the environmentally minded resort has 40 suites. Each has its own private pool, double-sided fireplace and porch, and is built around an artfully restored homestead. When you are lucky enough to stand on the balcony off the main dining room, the view in front of you stretches over endless bush, mountain and open plain.

Wolgan Valley is one of Australia’s most luxurious resorts. Dinner is a five-course affair that changes daily, courtesy of the resort’s chef, Damian Brabender, concluding with a choice of cheeses from a temperature-controlled cheese room. Produce is either grown on the property or hyper-locally sourced from no further than 160 kilometres away. Activities such as horse-riding, hiking, lounging by the pool (if you can call that an activity) or picnicking in one of the resort’s many pavilions draws a crowd so far-reaching that weekends are booked nearly the entire year through.

The jewel in the crown of Wolgan Valley, though, is the Timeless Spa. It sits underneath the main building just a stone’s throw from the resort’s glassy pool. With six plush treatment rooms, the spa team is well versed in the elements of the exclusive, chemical-free Sodashi skincare range used here.

Founded by Australian Megan Larsen, Sodashi represents the height of chemical-free luxury skincare, both in Australia and internationally. The Timeless Spa at Wolgan Valley offers five forms of facial, including the Samadara Ultimate Age-Defying Facial using the recently released Samarada range of products. There are also body cocoons, salt rubs, massage and meditation; people travel to Wolgan Valley sometimes just to visit the Timeless Spa. After your skin is smothered in the quartz-infused Sodashi Samadara Age-Defying Elixir, the glow will remain for days.

Broadsheet travelled to Emirates Wolgan Valley Resort and Spa as a guest of Sodashi Skincare.