Produced by Broadsheet in partnership with Kia.

From recycled plastic zips to casual wedding dresses and wearable art, Australian fashion designers always have the power to surprise. In partnership with the Kia Rio, we look at some of our favourite local talent doing things differently. 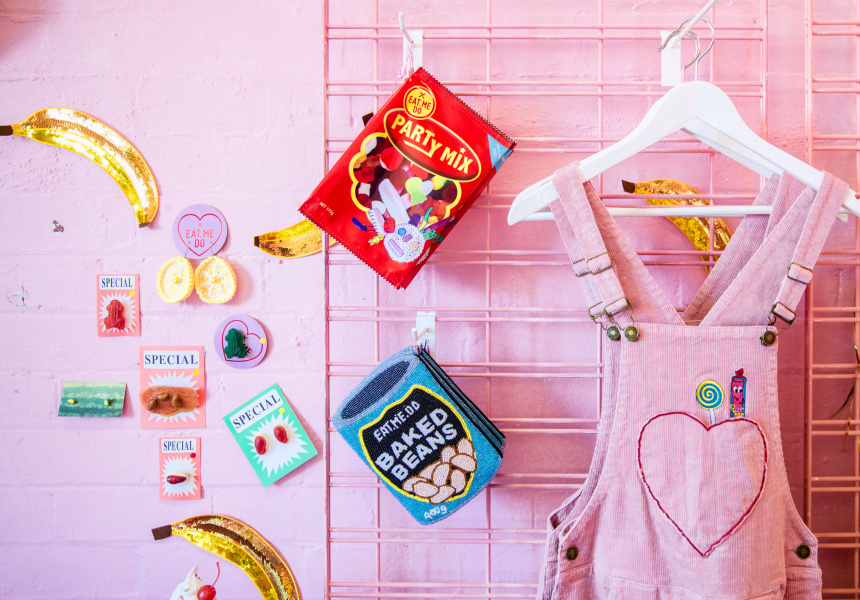 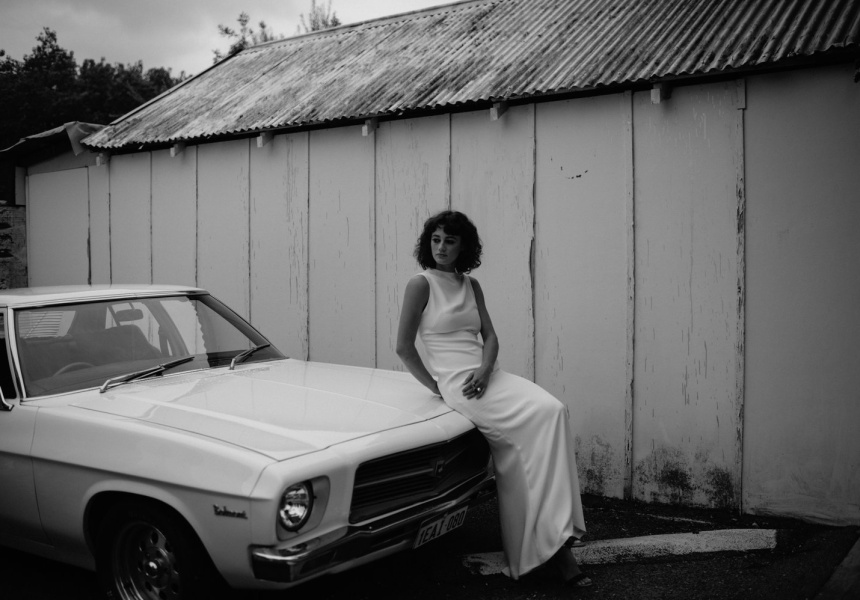 Australian fashion isn’t all sun-kissed beachwear and casual looks. Some of the most surprising, forward-thinking pieces are coming from local labels running with ideas borne from seeing cracks in the market (or just stumbling on a happy accident). Here we spotlight both new and old faces in Australian fashion, innovating within their space.

Lara Ivachev’s obsession with food has taken her far – not down the hospitality route, but into fashion. Ivachev started her food-themed accessories and clothing business Eat.Me.Do purely as a hobby, after struggling to find a job as an advertising graduate.

“I decided to just start doing something I enjoyed to see if I could make it into a viable business,” says Ivachev. The Melbourne designer has a knack for setting nostalgic foods into resin jewellery, from Fruit Loops and Tiny Teddies, to jelly snakes and popcorn. “With food, you never get stuck for ideas,” she says.

Ivachev still makes all her pieces by hand. “All the work was trial and error,” she says. “I enjoy the process of constantly experimenting and making new things.”

After being ousted from the fashion label she founded and led for more than 10 years, Kit Willow Podgornik’s rebirth into KITX, was the most talked about fashion comeback of 2015.

Back in 2013, the majority owners of the Willow brand, Apparel Group, fired Podgornik from her own business. She came back to fashion two years later, with KITX, a label committed to realising Podgornik’s fashion-forward vision through ethical and sustainable practices.

All the classic Podgornik touches that shot her to fame a decade ago are back on display in KITX – draping, lingerie-like detailing and asymmetrical layered dresses, anchored by the designer's trademark gladiator sandals and boots. But this time around, the materials have evolved.

As well as choosing GOTS-certified organic cottons, KITX uses ethically produced tencel (made from sustainably grown eucalyptus trees), and left-of-centre materials such as zips made from upcycled PET plastic bottles. The result is a look both classic and strikingly futuristic.

With “athleisure” here to stay, who better to lead the movement than a Bondi local? In 2016, Bondi native and stylist Pip Edwards joined forces with former Sass & Bide designer Claire Tregoning to launch activewear label P.E Nation. The brand’s blend of traditional sportswear functionality with street-style attitude has seen it rapidly ascend into a globally coveted brand.

P.E Nation makes everything from leggings and knee-length skirts to spray jackets and swimwear. Edwards’ and Tregoning’s clothes blur the line between the running track, street and nightclub. It’s no wonder P.E Nation has been picked up by luxury e-tailer Net-A-Porter; high-end department stores Lane Crawford, and Selfridges, as well as Urban Outfitters across the US.

The hallmarks of a Gail Sorronda piece are unmissable – the strict colour palette of black, white (and maybe a touch of red), as well as the signature motifs of sheer panelling, ruffles and pleating.

Brisbane designer Gail Reid’s darkly romantic dresses exude the confidence of a designer who knows exactly what she’s good at. Her brand has been around since 2005, and while she hasn’t changed much of her brand DNA over the years, she remains one of Australia’s most respected designers.

Reid has earned the admiration of Stefano Gabbana of Dolce & Gabbana, who featured Gail Sorronda pieces in the Italian label’s now closed multi-brand store Spiga2, back in 2010.

Wedding dresses you can wear again

A wedding dress you can wear after the wedding day? It exists. Perth-based designers Phoebe Cristinelli and Courtney Illfield got the idea for Lola Varma while photographing weddings together (Illfield is a photographer, Cristinelli assists her). After hearing brides lament the lack of minimal wedding dresses available, they decided to do something about it.

They launched Lola Varma in 2015, offering made-to-order pieces for brides in flowing silks without the addition of heavy beading or tulle. The result is a collection of bias-cut dresses, as well as silk and wool separates that can be mixed and matched.

“Our aesthetic is clean, and fuss free,” says Cristinelli. “We reject a lot of unnecessary discomfort that traditional gowns have. It’s important the bride feels comfortable on the day rather than dress how she’s expected to.”

While weddings and brides are the duo’s “definite calling” at the moment, don’t be surprised if Lola Varma expands into eveningwear. “A lot of our pieces are transitional,” Cristinelli says. “I think people find comfort knowing their pieces are re-wearable.”

Owners of Tiff Manuell accessories are literally clutching a work of art. Each one-off purse, clutch or tech case created by the Adelaide artist and designer Tiff Manuell begins its life as paint on canvas. Manuell then cuts the canvas to size and covers it in a PVC sleeve.

Manuell’s eponymous line of accessories began in 2013 as an accident. After making a one-off clutch for a friend, her business snowballed from there. In addition to the Tiff Manuell line, she still maintains her long-running global product design business, Happy House, which she began 18 years ago.

Manuell’s unique, multi-coloured abstract works have found fans the world over – her pieces are now even stocked at the Tate Modern art gallery shop in London.

This article is presented in partnership with the Kia Rio.

Produced by Broadsheet in partnership with Kia.  Learn more about partner content on Broadsheet.