We visit the bright and beautiful creative space of the iconic Australian jewellery and homewares brand, where everything is created in-house. 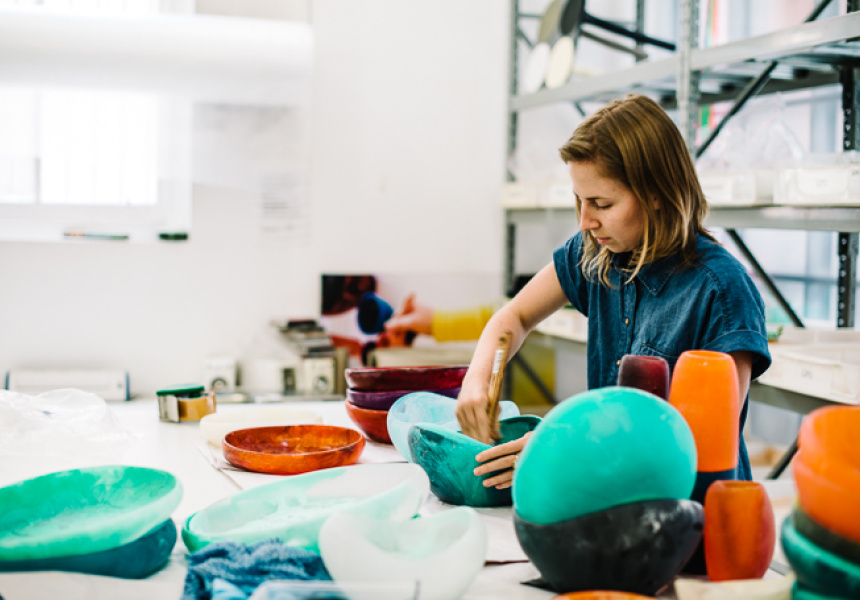 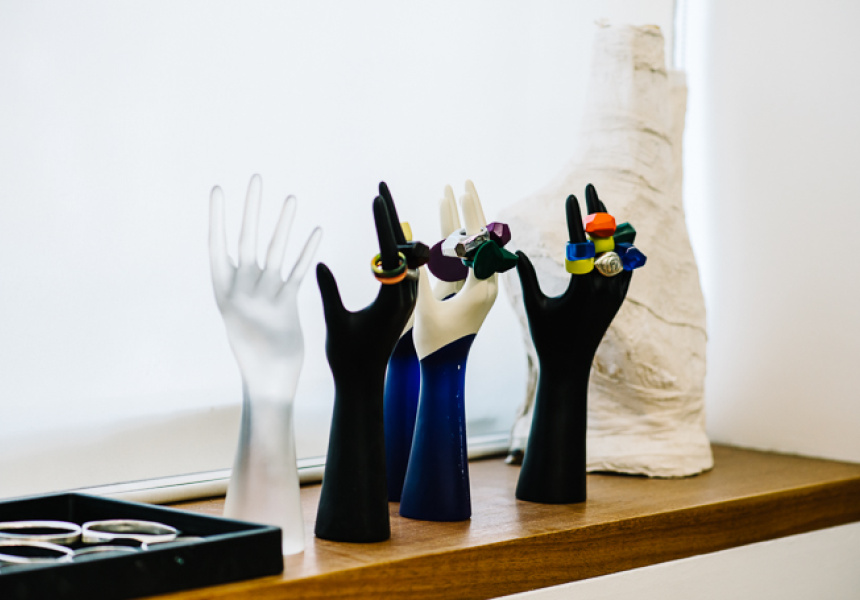 After walking through the doors of the Dinosaur Designs showroom in Strawberry Hills, we’re greeted by a kaleidoscopic milieu of brightly coloured resin. Lining the walls is an endless display of bangles, pendants, vases, bowls and salad servers in various vibrant hues, interspersed with the occasional metallic flash of gold or silver. As designer Louise Olsen describes, “It’s like stepping into the Great Barrier Reef.” It’s a fitting analogy for the iconic Australian lifestyle and accessories brand, which has firmly cemented itself a coveted niche within our design landscape.

Louise Olsen and Stephen Ormandy, partners in both life and business, are the creative forces behind Dinosaur Designs. For more than 30 years they have been using resin to boldly experiment with colour and form. And it is here, behind their showroom, where the magic happens.

The design process begins in Olsen and Ormandy’s sketchbooks, which they carry with them everywhere they go. From here, prototypes are made in plasticine, clay or wax, and then fine-tuned by the development team. The resin is then moulded in casts, left to set and finally hand sanded and hand polished. “The resin goes through so many hands it can’t help but have a lot of personality,” says Olsen.

This collaborative, in-house approach to production is fundamental to the brand’s ethos. As Ormandy explains, “It allows us to do a lot more variation of things and one-off is a big part of what we do. With an external manufacturer, you have to look at economies of scale and suddenly the mathematics and the dollar are controlling what you do.” Working solely in-house also allows for a stricter quality control and gives the designers a chance to make creative decisions along the way as pieces come to life. “For us it’s like being artists and running our own studio and being closely involved with what we put out into the world, [all at once],” says Ormandy.

While working with resin certainly has its joys, it is not without its challenges. As Olsen points out, “Resin is so malleable, like liquid honey, but it is also difficult to use as a component with other elements because it shrinks at different rates and times depending on fluctuating temperature and humidity. It is very organic and so can be quite temperamental.” That said, after three decades of working with the material, resin’s unpredictability isn’t holding them back. “We have been working with this material for such a long time now, we feel we have really mastered it and the sky is the limit,” explains Olsen.

Enter the couple’s recent venture into furniture design. The debut collection of side tables released late last year were inspired by crustaceans and lily pads and actually appear to be floating just above the ground, such is the expertise behind their craft. “It is amazing how, when you blow something up, it takes on a whole other life force. We love playing with the unexpected,” says Olsen.

Increasing the scale has allowed the designers to point out the sculptural element of what they do, something that they’re looking to develop further in the future. The designers also plan to branch out into textiles later this year, with the introduction of a printed napery range, as well as a follow-up towel collaboration with fellow Australian designers Jac+Jack. (Their first towel collaboration was so successful the towels completely sold out within 24 hours). “What can I say? We just love designing!” says Ormandy. Hey, no complaints here.