Studio Visit: Newtown's Cobbler is Taking Us Back in Time

A boutique cobbler opens up shop in Newtown. 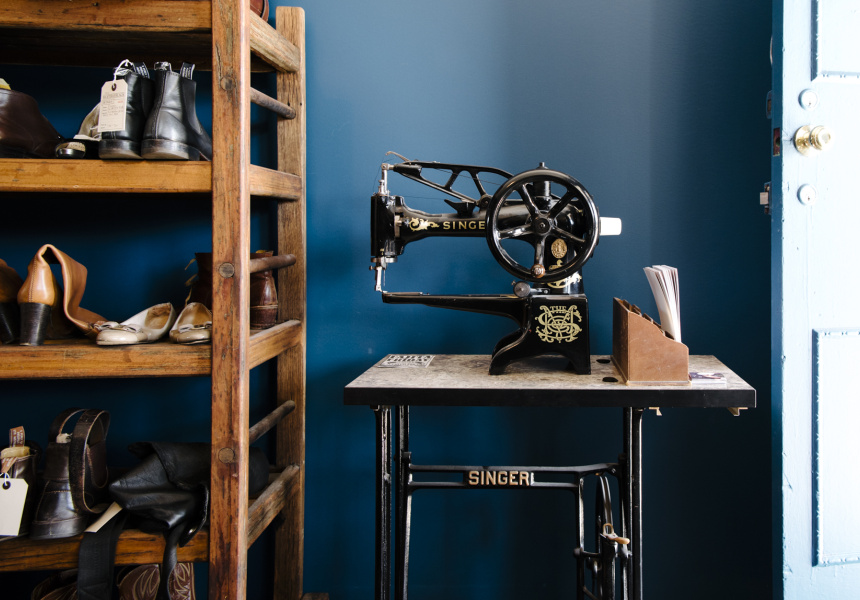 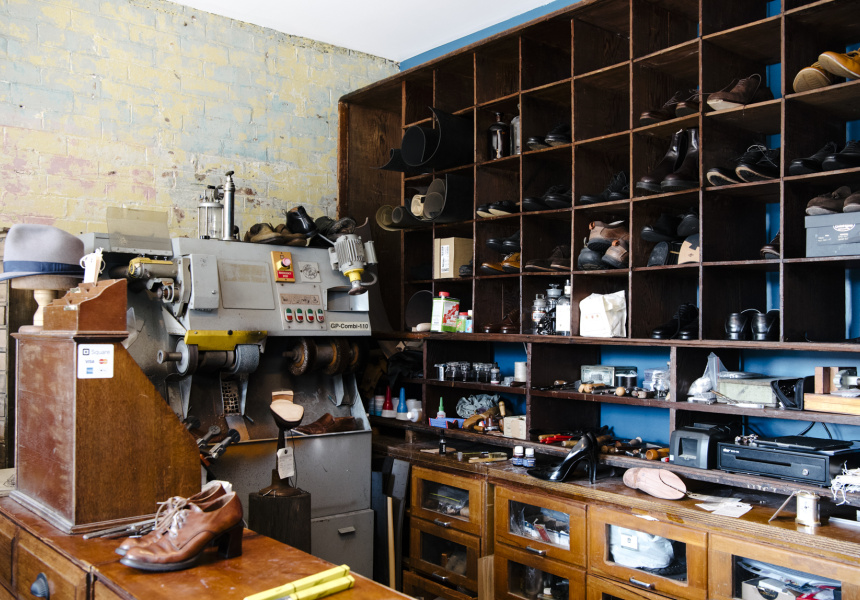 Somewhere between a swathe of antique sewing machines, taxidermy birds and vintage designer handbags in the old The Wild One store on Enmore Road now sits Nathan Baxter, cobbler extraordinaire.

This is Baxter’s first shopfront, having moved his business from a private studio in Chippendale to Newtown in August with partner and co-owner, Rachel Black.

The idea was to be more inclusive and to provide a service to a larger market.

“People only knew us by word of mouth,” says Baxter. “So the Chippendale studio was very exclusive. Having a store now means that we’re able to service a larger range of the community.”

“He’ll be fixing Saint Crispin’s, which are between $2000 and $3000 a pair,” adds Black. “But then he’ll be working on Doc Martens and New Rocks. So many shoe repairers won't know how to fix them, but instead of throwing them out, people can come to Nathan.”

A qualified scientist, Baxter worked as a lab technician, then in a government desk job before finding his calling.

“I just really enjoy working with my hands, so when I came across an Italian cobbler I pestered him until he let me work there,” Baxter says. “From then on in, that was all I was interested in.”

Baxter travelled to London to train at shoemaking school CarréDucker at Cockpit Arts studios. Alongside talented milliners, craftspeople and artists, he honed his skills in traditional shoemaking.

“The aesthetics and process that I understand are a little bit different to most, but putting the shoemaking process into shoe repair actually makes a lot of sense,” Baxter says. “You can pretty much bring me anything and I can fix it, and I can give you a good understanding of what the end result will be.”

The Newtown studio space has been overhauled. Baxter & Black’s window display features a 100-year-old antique trunk from St Louis alongside hats from The Well Dressed Head and Blakesby Hats, and Maka leather aprons and knife rolls from Tasmania.

“They were so far gone,” Black laughs. “But if you bought them new you could bring them in, we’ll put the soles on and they’ll last forever. We have soles for Jimmy Choo, Louis Vuitton, Christian Dior, everything. So I'm happy, and of course, all my girlfriends are happy.”

The window display will be updated seasonally, with a 1920s carousel planned next.

The interiors of the workshop itself have been given a much-needed refresh too. Azure walls are now lined with racks of shoes and bags, including a vintage Bally bag Baxter was given for his birthday and plans to restore.

Most of the equipment in the store is vintage and fully functional, like the hand-cranked Singer and Frobana sewing machines.

“This means a much smaller footprint, and it’s a lot more personal,” says Baxter. “You relate to the work more, and the movement of the machine is a lot more organic.”

Baxter spends a lot of time sourcing equipment from around the world and is part of a community of shoemakers who can lend a hand. “He can put the word out he’s looking for a particular item,” says Black. “And they’ll hunt for it and send it over, which means he’s the only one in Australia with a lot of these machines.”

In return, Baxter sends them Tim Tams and toy koalas.

Baxter knows the benefit of choosing certain materials over others. The shop stocks some of the best leather soling material from traditional tanneries in Germany and the UK. Baxter estimates an imported hide will last four to five times longer than the local version.

“Leather has to be soaked, and what we normally see here in Australia are markings on the surface from when the animal was killed,” Baxter explains. “Ours are beautiful and clean, they come out nice and flat. It’s some of the best you can get, some of the top shoemakers in the world use it.”

Next for the pair is an advisory service for vintage designer purchases, where customers can take products to Baxter to be certified and restored, and a new store is in the works in Katoomba, where the couple resides part time.

“We’ll start on that once we’ve settled here in Newtown,” Black says. “The problem is we only have one Nathan.”