Australian designer Rebecca Vallance makes her New York Fashion Week debut with a collection of glamorous androgyny. Broadsheet was there on the sidelines and caught a few moments with the designer backstage. 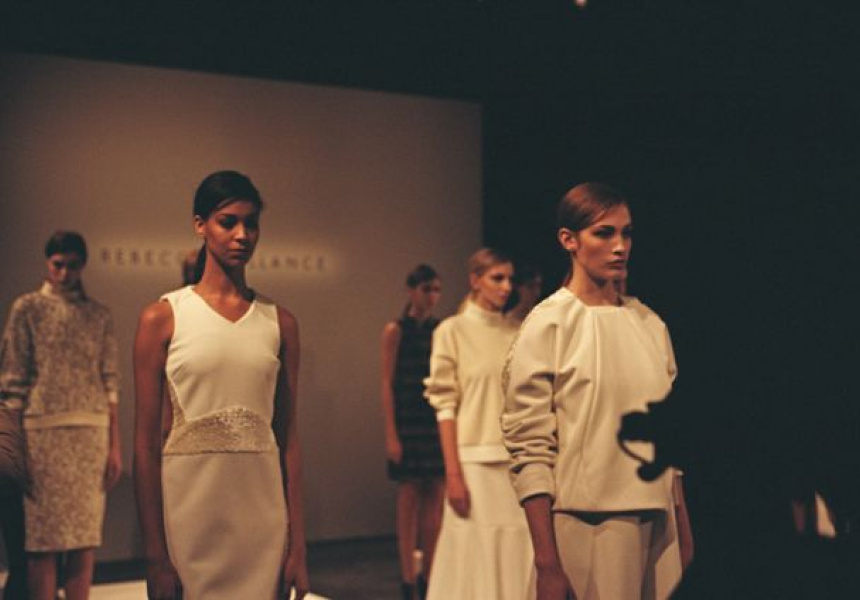 Despite the chilly early-morning air, the sun was shining last Friday when Australian fashion designer Rebecca Vallance made her New York Fashion Week debut. The presentation-style Fall 2014 show was held at the Hub, one of the newer IMG Fashion venues, deep in the basement of the Hudson Hotel. Models were positioned on raised plinths and stood motionless, dressed in polished menswear-inspired cuts – an arresting image.

Unlike at most fashion shows, the guests created the movement, mingling and buzzing around the ever-patient models (try spending one hour motionless in ten-inch heels).

Despite having staged runway shows in London and Sydney in the past, the presentation format seemed to work for Vallance, who effortlessly weaved her way through the models, highlighting intricate details on the clothes. A former career as a fashion publicist affords a designer some key skills, communicating with the press with ease is just one of them.

The collection ‘Lady’s Man’ is surprisingly feminine considering it was inspired by menswear trends and pieces. There are none of the stereotypical styles we’re accustomed to seeing in man-style fashion (oversized suiting, shirting, hats, and so on). Vallance likes to give everything her “ladylike polish”.

That polish includes working with high-quality European fabrics, like French brocade, which works beautifully in structured tailoring. Other, more masculine materials – grid-print wools in navy and brown – highlight the feminine shapes such as pencil skirts and A-line dresses.

After five years in a business, which by her own account is doing “really, very well”, Vallance is making a concerted push into the highly competitive US market. “We’ve been selling in the States for more than 18 months now, so the time felt right to show,” she tells me.

Having recently moved back to Australia after living in London, Vallance feels ready to tackle the bi-coastal demands of American buyers. While this collection feels more suited to trans-seasonal dressing, Vallance admits she’s hoping to lure buyers from Los Angeles, “We’re east-coast heavy at the moment.”

Sharing the New York schedule with fellow compatriots Zimmermann, Dion Lee and TOME, this was Vallance’s first official venture with fashion week organiser, IMG Fashion. In a season that may be remembered for its Lincoln Center tent defectors (several high profile brands, including Alexander Wang, Diane von Furstenberg, Michael Kors and our own, Dion Lee, opted to show off-site) Vallance is just thrilled to be involved.

The relentless workload for fashion designers continues to be a hot button issue, and Vallance concedes that running her own business is extraordinarily hectic. “It is beyond full-on, I honestly cannot remember the last time I had a day off.”

Next on the agenda is getting ready for Australian fashion week which Vallance reminds us is “exactly eight weeks away.” At least the weather should be more agreeable – in New York, half the collection didn’t arrive until the day before the show because of a snow blizzard, forcing Vallance and her team to fit and alter garments well into the night.