We talk with Manuscript editor, author and curator Mitchell Oakley Smith about the Art Gallery of South Australia’s latest exhibition – straight from Paris. 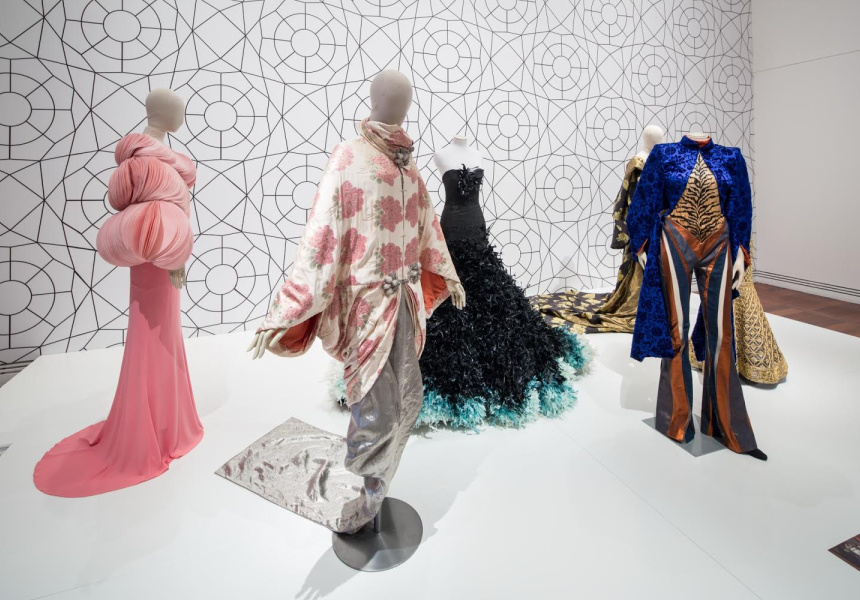 On February 12, 1947, Christian Dior unveiled his first haute couture collection. It was 10.30am. The fashion press – Harper’s Bazaar,Vogue, Reuters among them – were waiting for the show to commence; chairs were crammed in so tightly that elbows touched. Flanked by tall French windows and a lofty ceiling, this French salon was about to be privy to a defining moment. Women entered, sheathed in wasp-waisted corsets and boned bodices, slender shoes and defiant pillar-box hats. The glimmering jewel was Dior’s Bar suit; a creamy silk blazer with fitted shoulders and a hip-padded black skirt. It was a sensual departure from wartime fashion, a risqué, pumped-up femininity.

That Bar suit is now the stuff of mythology; the kind of thing one sees in glossy books on coffee tables. It’s also one of 100-plus garments currently showing at the Art Gallery of South Australia. The first exhibition of its kind – and scale – in the country, Fashion Icons: Masterpieces from the collection of the Musée des Arts Décoratifs, Paris, presents the most seminal and replicated garments in western fashion under a single roof. Curator Pamela Golbin and designer and architect Christian Biecher have assembled a rather breathtaking array: 50s ball gowns by Christobol Balenciaga, the 80s power couture of Thierry Mugler and Azzedine Alaia, defiant pieces from punk matriarch Vivienne Westwood.

Alongside respected local curators (Nick Mitzevich and Alison Kubler), writer and editor Mitchell Oakley Smith has been hard at work, arranging an extensive event program to accompany the still exhibit. Many of these talks and panel discussions are free with an entry ticket, their cost subsidised by corporate sponsorship.

“Australian audiences certainly don’t need to be spoon-fed when it comes to fashion,” says Oakley Smith. “We know what haute couture is in the traditional sense, but what does it mean to build a fashion business in Australia, miles from Paris? That’s something that Carla Zampatti and Toni Maticevski will discuss. What is the process of showing your wares in Paris as an Australian designer? That’s something that we’ll unearth in the local premiere of the Kym Ellery documentary.”

There’s something tantalising about the breadth of the design objects on show; glorious textiles with no expense spared, dresses that cleverly subverted the moral fibre of their zeitgeist. Oakley Smith found every bit of the process absorbing, right down to the process of garment transportation. He speaks of swathes of acid-free tissue and stores in temperature-controlled rooms, of historic garb presented behind glassy capsules, “Not just to protect them from sticky fingers, but more so because of our dead cells that slough off our skin.”

The curators are hoping this exhibit is a cross-generational hit. They’d like grandmothers to be there alongside gangly teens and art students and industry professionals. It’s a rare opportunity to be privy to a mammoth archive, to be among objects that are truly iconic. As Oakley Smith comments: “There’s perhaps only a handful of Australians that have experienced haute couture, due to its price and it being an exclusively French affair; if you believe in the rules dictated by the Chambre Syndicale, of course. We might see it online or in a magazine, or even at a show if you’re a fashion editor, but that’s very different to seeing it up close, to seeing the hand craftsmanship, the bead work, the delicate fabrics.”