New York architect Peter Marino has reimagined the four opulent floors, which have reopened after a 12-month renovation – now with the Objets Nomades collection in Australia for the first time. After an intensive 12-month renovation, the Sydney Louis Vuitton flagship store has reopened. The fashion house recruited high-profile New York architect Peter Marino – who has also worked on stores for Armani, Calvin Klein, Fendi and Christian Dior – for the redesign of the building, a bank built in 1857 by renowned Australian architect Edmund Blackett.

Marino has retained some of the historical elements, such as the lower-ground-floor arches and original safe (now on display). The boutique, which originally opened in 2011, now spans four floors, rather than three.

On the second floor you’ll find the Apartment, a space for VIP shoppers with two salons and a gallery. (The salons will be used for private appointments, trunk shows and special events, with dining options available.) Several artworks from Vik Muniz adorn the walls of this area, including his chromogenic print Irises, after Van Gogh (from Pictures of Magazines) (2004).

Indeed, it’s not just the clothing and accessories that will catch your eye at the Maison – art is a feature of the design. Artist Karine Leval’s Heterotopia prints are scattered throughout, while her tropical, colourful animation of the iconic LV monogram is projected onto a fluorescent 3D sculpture that’s front and centre. Marino was responsible for choosing the art, which includes works by Peter Dayton, Richard Misrach and Thomas Struth. Gregor Hildebrandt’s Mit Henkeln aus Nephrit (2019), made of cut vinyl records, canvas and wood, is also on display.

Four antique Louis Vuitton archival trunks are on display, including a 1916 Aéro canvas trunk, which is said to have belonged to French aviation pioneer Ernest Archdeacon. And the special Objets Nomads homewares and travel collection, made in collaboration with some of the world’s top designers, is available in Australia for the first time on a permanent basis. The collection includes spiral lamps by Atelier Oï, which are hung from the seven-metre-high ceiling. 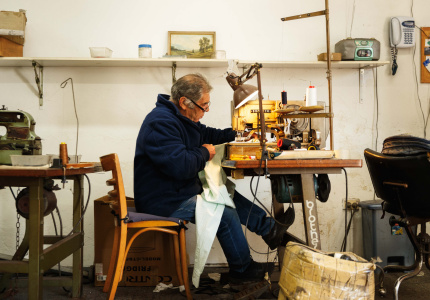