How to Influence People from the Antipodes

A creative director with a heart for retail, antipodean Geoffrey J. Finch talks to Broadsheet about his London-based womenswear label, Antipodium, on a rare visit back home. 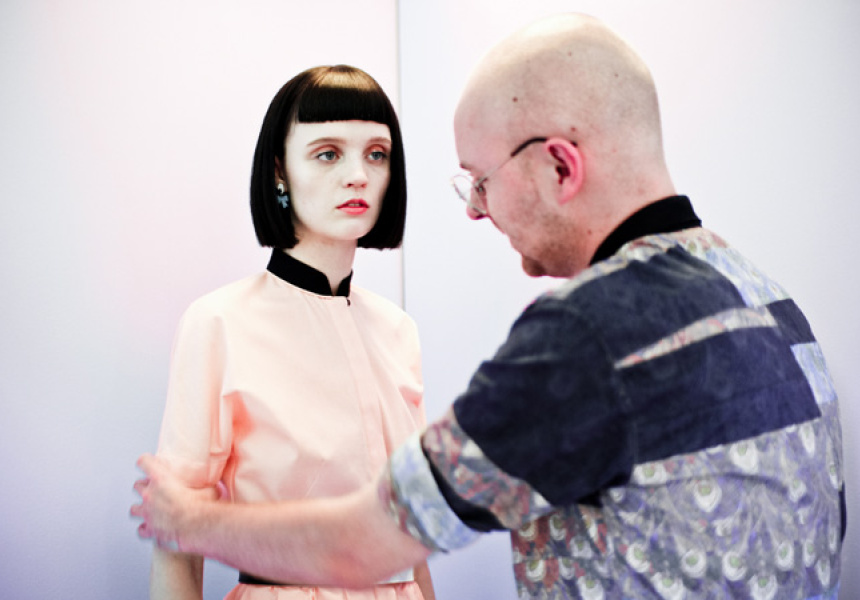 The regional Queensland city of Toowoomba is about as far away from the bright lights of London as you can get. Perched in the highlands west of Brisbane, it’s a place known more for its high population of retirees than young fashion types. Nonetheless, Toowoomba was exactly where Geoffrey J. Finch – creative director of leading womenswear label Antipodium – was born and raised.

He grew up “to the sound of the sewing machine”, surrounded by 70s prints and fabrics at the local haberdashery shop, where his mother, who was a dressmaker, first lit the spark that would fuel a great ambition. And while Finch agrees that it was an unlikely career path for a boy from Toowoomba, a life in fashion was one he was determined to follow.

When we sit down for a chat during a rare visit home, Finch is the picture of London cool, with any hint of an Aussie drawl replaced by a soft English accent. Perhaps the only throwback to his Queensland past is a playful penchant for wearing shorts.

There’s a touch of irony (and a smack of fate) that Finch’s first job in London, almost 10 years ago, would be with Perth-born Ashe Peacock. She would become his future creative and business partner, but back then was looking to expand her PR and wholesale agency – the cleverly named Antipodium – into a retail space. The business, which introduced Australian and New Zealand brands to the UK market, had enjoyed wide interest a retail space seemed the next step in further showcasing the brands to a keen public. Enter Finch.

With his knack for sales (a childhood lost to a haberdashery shop does has some perks), Finch was quickly running the wholesale side of the business before turning his attention to the store. It wasn’t long before Peacock and Finch realised they shared a similar aesthetic and began dreaming up designs of their own. It was the start of the new millennium and, as Finch recalls, the end of grunge and boho. “It was perhaps a reaction against the mega brands, but we saw a gap in the market for clean, versatile garments,” he says.

The first capsule collection was fully intended to be a one-off, but the response was too strong to ignore. British Vogue shot some pieces straight away but it was when the head buyer from Liberty told Finch he should develop the collection further that it was a fait accompli. A new label was born.

By their second collection rolled around, Finch had doubled his orders and was selling to some of the world’s best boutiques – many of which still support the brand today.

For a conceptual designer, who is an avid researcher and editor when fleshing out ideas, Finch places a huge amount of importance on the retail experience – be it in-store or online. He believes retail should be about informed staff, great product selection and sharp instinct.

“I actually go to work in Liberty once a season and I’d like to do that more, because it’s really interesting meeting people who are buying your clothes and they teach you a lot,” he says.

Although the original Antipodium store has long since closed (enabling Finch to focus his energies on the label), he still dreams of opening a space again and hints that it might not be too far away. For now, he is content to sell through their online store (which will start shipping to Australia this year) and some of the world’s most coveted boutiques, such as the aforementioned Liberty in the UK, Barneys in the US, Opening Ceremony in Japan and Incu in Australia.

While London now feels “very much like home” there undoubtedly remains an Australian sensibility to the way Finch designs. It’s an irreverent play on prints, colour combinations and referential themes that seems to be striking a chord, the world over. But if you’re looking for the soul or spirit of the brand, surely it has to be in the shirtdress, which has featured in every collection since the launch. “Wearable, functioning and versatile,” offers Finch, it seems to embody Antipodium, irrespective of cut or print.

The latest collection is the sardonically named ‘How to affect robots and influence people’ and saw Finch collaborate with a leading British plastic surgeon. The result is a collection featuring a sort of surgical trompe l’oeil that is not only visually striking but also very funny. “I was quite fascinated by the fact that we can now modify ourselves to android-like perfection and at the same time the technology through robots to have emotions exists,” muses Finch

Another new collaboration is with online shopping Mecca ASOS – specifically, their Incubator initiative. “What they do with ASOS Inc. is work with established brands and then take them into a new product area with a goal to expand the business. For us this is shoes, so they’ve introduced us to factories and suppliers and help us along the way.”

As to who inspires Finch, he can’t go past Nicolas Ghesquiere (formerly of Balenciaga), Christopher Kane and Australian 80s fashion and textiles icon Stuart Membery. But he makes special note of the team behind the brand – namely the production managers, design assistants, sellers and publicists.

“It’s actually the ladies around Antipodium that I find most inspiring. I can’t emphasise enough how important they are to the brand and the business, and to my creativity.”

As Finch winds up another fleeting visit home, I ask what it would take to bring him back full-time. Without a hint of hesitation, he replies: “A Glenn Murcutt house.”